64GB SSD on the Desktop: Samsung and OCZ go mainstream

We are seeing the SSD market mature quickly from the performance, pricing, and capacity viewpoints. Just over a year ago, the first generation SSD drives had average capacities in the 16GB range with read/write performance around 45/25 MB/s. Pricing for these drives was around the $100 per-GB range and most suppliers explicitly stated the drives were meant for industrial, military, medical, or commercial use.

These particular drives now had the capacity range to become an alternative in the consumer notebook market or for those enthusiasts on the desktop wanting the absolute best synthetic benchmark performance. While prices were very high, the security of a drive in a portable system not having any moving parts, offering silent operation, greatly reduced thermals, and depending on the situation, improved battery life meant the SSD had arrived as a viable if expensive storage option. 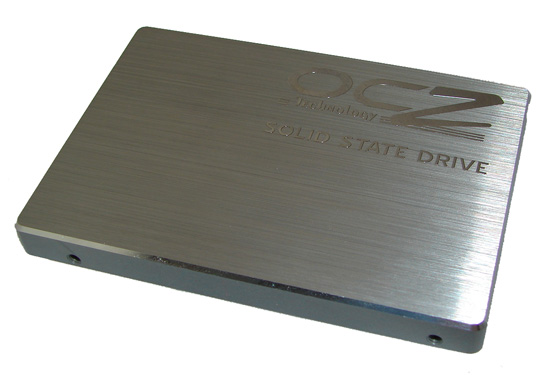 Now, with the latest controller technology we are seeing the new mainstream drives offering performance equal to the best mechanical desktop drives in most cases. The sustained read/write rates have increased to the 100/80 MB/s range. Capacities are now standardizing at 64GB with average pricing dropping to around $16 per-GB for the mainstream sector. The highest performing drives feature 120/120 MB/s read/write speeds with capacities up to 128GB, but pricing is around $29~$32 per-GB. In the high performance sector, we expect to see 150/100+ MB/s read/write performance shortly along with capacities up to 128GB around the current price range.

With that in mind, we are taking our first look at the new "mainstream" SSD technology from Samsung today that also features its fraternal twin from OCZ Technology. From a performance viewpoint, the drives are identical - as they should be since both drives share the same hardware. The only differences are in the front casing design; both feature a brushed aluminum case with the respective corporate names etched on the case. The other difference is availability as you can find the OCZ drive at leading e-tailors with pricing around $1049 for the 64GB model, while the Samsung drive is generally available as an option from leading PC manufacturers with limited retail availability.

Regardless of availability, both drives perform the same on the desktop, as we will see today. We have several other SSD drives arriving in the near future, including the new MLC based units with third generation controllers from SuperTalent, Crucial, and others that might set a new price/performance standard for SSD technology. However, we will test those drives and our samples today in a notebook platform to see how well they compare to the new mechanical drives from Seagate, Western Digital, and Hitachi.

When Smaller is Better
Tweet
PRINT THIS ARTICLE
Comments Locked