NVIDIA 780a: Integrated Graphics and SLI in One

After being blitzed by the NVIDIA marketing machine at CES 2008 about upcoming chipsets, we were excited about the technological possibilities NVIDA was planning to deliver a few weeks later. As it turns out, it was a few months later but as of today NVIDIA is officially introducing the nForce 780a SLI chipset and its family companions, the 750a SLI and 730a chipsets.

At first look, it appears NVIDIA has mastered the marketing checklist with features ranging from HyperTransport 3.0 and PCI Express 2.0 to the environmentally friendly Hybrid Power and performance enhancing Hybrid SLI capabilities. Of course, AMD has featured HT 3.0 and PCI Express 2.0 on their 790FX chipset since November and the 780G had Hybrid CrossFire operating since March. However, AMD does not offer Hybrid power capabilities nor does the flagship 790FX offer integrated graphics capabilities. We will have to wait a few more months for the AMD 790GX to arrive for those two features.

In the meantime, NVIDIA sits alone as it starts to roll out integrated graphics on all of its chipsets over the next few months. NVIDIA is calling this technology a motherboard GPU or mGPU for short. We think the inclusion of integrated graphics on all chipsets is a definite step in the right direction and one that we applaud if done correctly. Our first results indicate that NVIDIA is on the right path, although one that was a little bumpy for us. 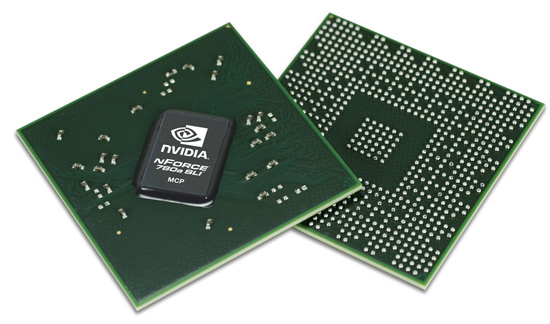 The most important design element of the nForce 780a SLI and other chipsets in this product family is the mGPU. Based upon the 8400GS core, it offers decent casual gaming and application performance as a standalone unit. This capability is nothing new as integrated graphic chipsets have been around for a long time. However, the IG performance is clearly a step above what NVIDIA has offered in the past, but a step below the current 780G from AMD. Besides offering extensive HD playback capabilities and additional monitor outputs, its primary purpose is seguing into NVIDIA’s Hybrid SLI technology.

Hybrid SLI offers two different and very distinct technologies that consist of GeForce Boost and Hybrid Power. GeForce Boost allows for the pairing of the mGPU with a discrete graphics card (dGPU) to provide SLI capability to improve 3D performance. Since the mGPU is an 8400GS in disguise, the natural pairing of this technology is with a discrete 8400GS card. NVIDIA provides support for the 8500GT also as its performance closely matches that of the mGPU, anything higher would result in a mismatch in performance and negate any benefits of adding an inexpensive dGPU.

The true technological gem is the HybridPower functionality as it allows the mGPU to function as the primary display for most application tasks and high definition playback duties while the discreet graphics card is in standby waiting to tackle demanding 3D tasks. We use the term standby, but the system actually turns off the dGPU to conserve power until required. In actual practice, we noticed a slight delay when switching from the mGPU to the dGPU, something that we believe driver and BIOS tuning can resolve. However, the biggest drawback at this time is that only two discreet graphics solutions are supported, the 9800GTX and 9800GX2 cards.

So let’s take a detailed look at the chipset specifications and delve into the performance results of the 780a SLI chipset against its immediate competition from AMD.