The Gateway OSD remains largely unchanged since last Gateway LCD we reviewed -- the Gateway FPD2485W. It worked well over a year ago and it continues to work well today. Gateway uses a touch-sensitive buttons system on the right side of the LCD, but rather than leaving you to guess where to press, all of the active buttons light up as soon as you press the menu button. Our only complaint is that there are areas where Gateway could make better use of the buttons.

As an example, when you first activate the menu there are six buttons plus an additional two buttons up top that cycle through the color presets. These six buttons allow you to jump directly to one of several areas. Once you enter the Main menu, however, you then have to use the top two buttons to move up and down with the third button functioning as a select key. Granted, there are eight options in the main menu, but two of these (Auto and Reset) could easily be moved to a submenu. As a whole, though, this is a minor complaint on an OSD setup that works well.

Gateway includes seven color presets, one of which is "User" and allows manual adjustment of the color levels. Gateway also includes support for RGB and YUV color spaces. Also of interest is the "UltraResponse" function that supposedly improves pixel response times -- not that we could really tell. Gateway claims 3ms with UltraResponse enabled versus 5ms without UltraResponse.

The FHD2400 has four aspect ratio options: Wide, Zoom, 1:1, and Panoramic. "Panoramic" scaling only shows up with component (and perhaps other analog video connections), but then it just seems to do the same thing as "Wide". "Wide" fills the entire LCD with your current resolution, while "Zoom" fills the height or width while maintaining the correct aspect ratio. "1:1" is again a direct-mapped mode without any stretching. Here's a summary of our resolution testing:


First, let's get this out of the way: the component connection is only really suitable for 720P or 1080i signals. In general, the 720P option looks much better -- the opposite of the 2408WFP when using a component connection. All resolutions with more than 720 scanlines show severe flicker on component, as they run 60Hz interlaced. The other tested input options all work much better. VGA and DVI achieve a perfect score on all of the available resolutions, with no scaling abnormalities. Also worth mentioning is that the "Auto adjust" function on VGA is very fast. HDMI input has a few errors that you can work around by manually selecting "Wide" scaling; only 1600x1200 as an uncorrectable error in that it always fills the entire LCD, regardless of what scaling mode you choose.


Running at non-native resolution, the FHD2400 does well at scaling the image to fit the panel and there are no serious artifacts. Obviously, 1920x1200 is still the optimal setting, but if you need to play a game or watch a movie at a lower resolution, you shouldn't have any complaints. 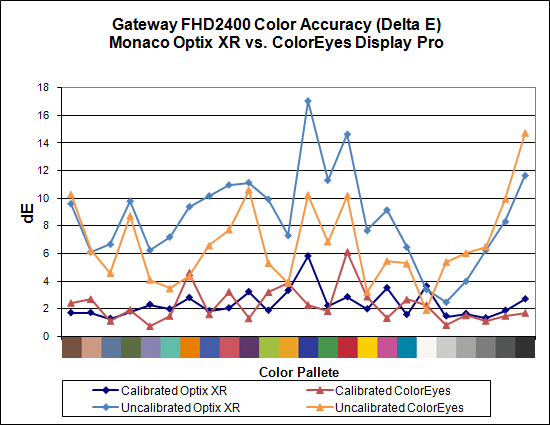 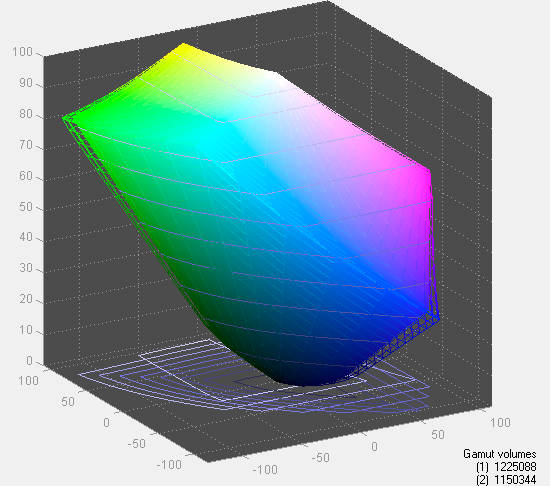 Besides limited viewing angles -- which are a problem on all TN panels today -- the one sticking point with the Gateway FHD2400 is color accuracy. After calibration, it achieves an average Delta E of only 2.3, which puts it in last place among tested LCDs. Uncalibrated color accuracy is also quite poor, coming in at 8.6 with plenty of colors above 10.0. Imaging professionals will almost certainly want something better. The good news is that the color gamut is good, achieving over 95% of the Adobe RGB 1998 standard.

The Gateway FHD2400 is sort of the opposite of the Dell 2408WFP. The Dell offers the absolute worst input lag but has by far and away the best color accuracy. The FHD2400 doesn't suffer from input lag at all, but unfortunately it has some of the worst color accuracy among tested LCDs. It's still a beautiful looking LCD, and it gets so many things right that we have no qualms recommending it to non-imaging professionals. That goes double if you'd like glossy LCD panels.