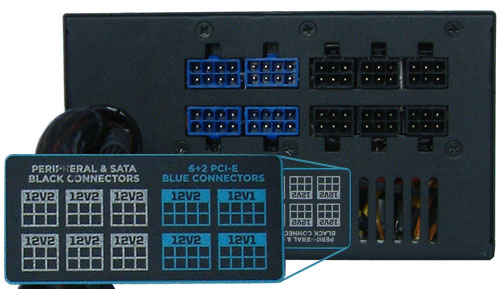 The front features the cable management, which consists of fixed cables (beside the enlarged sticker) and jacks to attach the cable harnesses. The sticker shows that the six 6-pin jacks will hold the peripherals and the four 8-pin jacks will power up the graphics cards. The peripherals will be powered by the 12V2 rail as are two of the PEG harnesses. Two of the jacks are connected to the 12V1 rail. There is no indication in the manual or on the power supply as to which of the rails the fixed cable harnesses are being powered up by, but as there are only two jacks in the back on the 12V1 the assumption is that the 24-pin, the extra 12V (P4), and both of the already attached 6/8-pin PEG connectors are connected to the 12V1 rail. We have measured this during operation with a voltmeter and found that the fixed cables are indeed 12V1. 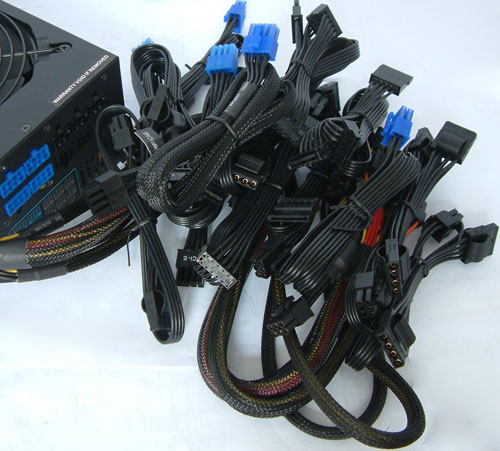 The attached cable harnesses are all sleeved with a black mesh. All of the cables that can be attached to the jacks in the back are connected flat against one another similar to normal IDE cables. Corsair maintains it has two 4/8-pin EPS connectors. One of these is already connected to the fixed harness and one belongs to the loose cables you can attach to the jacks in the front. If this additional EPS connector is used, there will be one less jack available for a PEG connector, which means using triple-SLI will not be possible in this configuration. Since Triple-SLI motherboards feature only one 8-pin EPS jack on the board and occasionally an additional Molex jack for additional power, they don't really need two 8-pin EPS jacks plus three PCI-Express slots for triple-SLI. 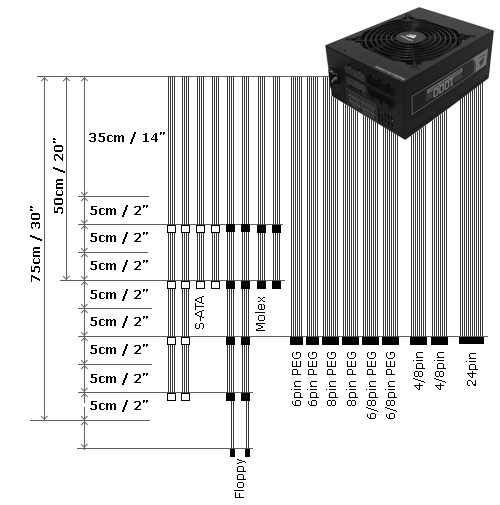 Looking at the above figure shows a large variety of cables and connectors available for use. There are not enough jacks on the power supply to use all the cables at the same time, but the user at least gets to choose the best harnesses for his system. The length of 70cm/28" might seem somewhat strange for such a powerful power supply, as we have seen lengths of up to 120cm/47" before, but Corsair didn't feel it necessary to go that far. All of the ATX and PEG connectors are 60cm/24" away from the power supply, which is a fair length, but peripherals come up short. In our opinion, it would have been nicer if Corsair had included at least one harness with a length of around 100cm/40". The distances between the connectors is good even though there is only 10cm/4" between them, as most users with more than two hard drives will have them close to each other in the mounting frame of the case. As the diagram shows, Corsair didn't include six 8-pin PEG connectors as stated on their website. There are two 6-pin, two 6/8-pin, and two 8-pin PEG connectors on board, which gives it a wide variety of connectivity for graphics card arrays. 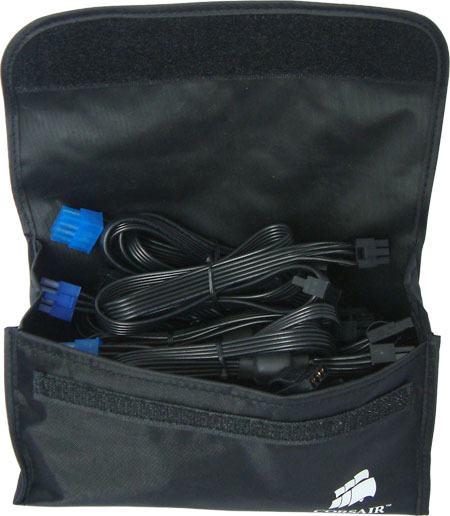 All other unused cables can be stored in this small bag, but beware of the girlfriend or wife who will be interested in using it for other things like storing make-up utensils. 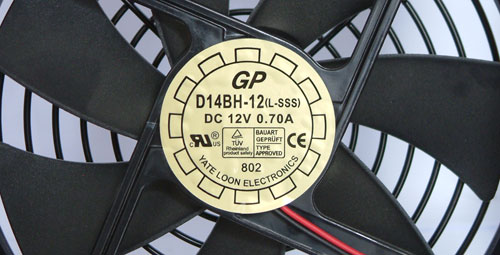 The installed 140mm ball bearing fan is manufactured by Yate Loon electronics and is rated at 2800RPM maximum rotation at 12V. It is supposed to be almost 50dB(A) at this speed according to Yate Loon, but Corsair will most likely not need to have the fan running at this speed. We'll find out later in the test.