NVIDIA's 790i has already proven itself a very capable platform for overclocking, something we did not expect to say considering this is the first (and last?) DDR3 memory controller from the green team. Performance is great, overclocking is easy, and NVIDIA has even managed to keep power consumption in check. By every account, the 790i is a real contender when placed side-by-side with Intel's X48 Express chipset.  However, there is a dark side to this chipset.  We are working with NVIDIA at this time to figure out our random data corruption problems.  We have lost several drive images during testing.  While we expect to corrupt drive images when pushing a system beyond its boundaries, this problem has occurred numerous times with fairly ordinary overclocks.  Typically, settings around 400FSB (QDR 1600) and memory set at DDR3-1600 with relaxed timings around 7-7-7-18 resulted in random, but not repeatable corrupted images in Vista.  NVIDIA is busily testing at this point and we will have an update shortly.

As we see it, the extra $100 premium beyond the cost of even the most obnoxiously priced Intel-based motherboard buys you the right to run your NVIDIA GPUs in SLI, assuming you can afford more than one after shelling out for the ASUS Striker II Extreme. Of course, once you have your hands on this board you might find you will stop at nothing to get SLI up and running. NVIDIA's second shot at Quad-SLI with a pair of GeForce 9800 GX2 cards could be very tempting if driver performance ever catches up with the hype. There is something special about running Crysis with "Very High Settings" in DX10 at 1920x1200. 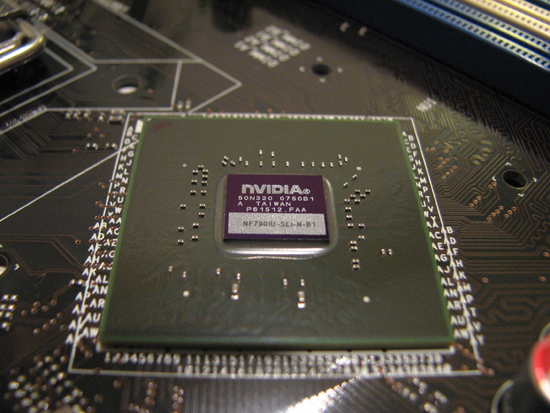 I think this NVIDIA 790i Ultra SPP just winked at me.

DDR3 prices have also made the idea of moving to either X48 or 790i a whole lot less painful than it would have been just a few short months ago. Great clocking and relatively inexpensive 2GB kits of DDR3 are starting to show up at all our favorite online retailers. We were able to find 2GB kits like the Patriot Viper rated at DDR3-1600 with 7-7-7 timings for under $200 without too much trouble. To date, all of our experiences with DDR3 memory have shown the DDR3-1600 kits to be incredible performers when it comes to overclocking.

If you're still buying DDR2 and you're serious about overclocking, you're buying yesterday's technology. That might be fine for the price-conscious enthusiasts, but if you're considering the purchase of a $300+ motherboard and $1000 CPU we have to strongly recommend making the move to DDR3. It's also worth noting that once Intel's Nehalem architecture hits the market - which should occur later this year - you can kiss DDR2 compatibility on the latest Intel platforms goodbye. At that point, you'll need to purchase DDR3 memory if you want to keep up with the Joneses - though what sort of prices and performance we'll see for DDR3 by the time this occurs is anyone's guess. Our advice for enthusiasts is to send your DDR2 packing and never look back when it comes time to purchase a new high-end motherboard.

Frankly, some of us find all this talk about overly expensive products depressing. What happened to expecting to pay top dollar for premium components? True, there are those out there that are able to buy mainstream products and push them well beyond their rated capabilities for next to nothing. Shoot, that is the very definition of overclocking right there. However, when did we become entitled to low prices when it comes to picking up motherboards claiming to be ultimate overclockers? It is one thing to pay a lot and get a little, but when a product delivers everything it promises and more, complaining does not make sense. We will tell you straight up, the ASUS Striker II Extreme is a serious piece of hardware, and if you want to play with the big boys, you had better be prepared to throw the cash down!