Return of the CISC: Macro-op Execution

The Pentium Pro was Intel's first CPU that finally ended the RISC vs. CISC debates of the early 1990s. To the programmer it was still a x86 CISC machine like every previous Intel processor, but internally once it received its x86 instructions it decoded them into smaller micro-ops to run on a simpler, faster and more efficient RISC core.

By maintaining backwards compatibility with all previous x86 processors Intel was able to leverage one of the major strengths of its CISC architecture (mainly the installed x86 user base) while continuing to evolve by relying on a high performance RISC core.

It turns out that some x86 instructions shouldn't be broken up into smaller micro-ops because they tend to augment each other. With the Pentium M Intel began fusing certain micro-ops into single operations so that they would go down the processor's pipelines atomically, thus saving power and improving efficiency. Intel called this feature micro-op fusion. If two micro-ops were treated as one when going down the pipeline that effectively increased the "width" of the CPU, allowing more instructions to be operated on at once. The internal core was still very much a RISC machine, it was just able to do a little more in certain circumstances.

The Atom takes things one step further and most x86 instructions aren't even broken down into micro-ops internally. As Atom isn't an out-of-order core, it doesn't exactly make sense for it to have tons of micro-ops in flight since it can't reorder them for optimal execution. Furthermore, by keeping most instructions as single operations Intel is able to effectively increase the "width" of Atom. 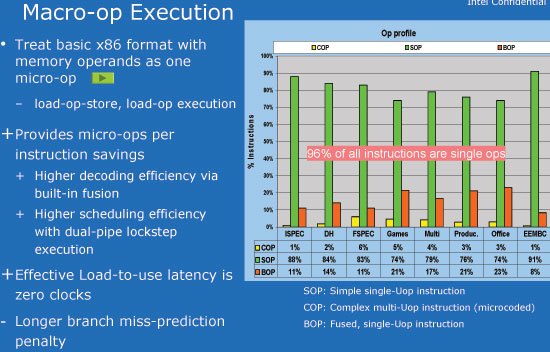 Intel has spent much of the past decade perfecting its ability to break down x86 instructions into smaller, RISC-like operations and building very high performance cores to deal with these small atomic operations. What's most interesting is that we've now come full circle where in the quest for greater performance per watt Intel is now doing the opposite and not breaking down these x86 instructions in many cases.