We normally do not get giddy about the thought of reviewing another low budget integrated graphics platform. All right, some of us do, as we are eternal optimists that eventually a manufacturer will get it right. Guess what: AMD got it right - not exactly right, but for the first time we actually have an IGP solution that comes very close to satisfying everyone’s requirements in a low cost platform. Why are we suddenly excited about an integrated graphics platform again?

The legacy of integrated graphics platforms has historically been one of minimum functionality. With Intel as the number one graphics provider in the world, this can pose a problem for application developers looking to take advantage of the widest user base possible. Designing for the lowest common denominator can be a frustrating task when the minimum feature set and performance compared to current discreet solutions is so incredibly low.

The latest sales numbers indicate that about nine out of every ten systems sold have integrated graphics. We cannot understate the importance of a reasonable performance IGP solution in order to have a pleasurable all around experience on the PC. IGP performance might not be as important on a business platform relegated to email and office applications. However, it is important for a majority of home users who expect a decent amount of performance in a machine that typically will be a jack-of-all-trades, handling everything from email to office applications, heavy Internet usage, audio/video duties, and casual gaming.

Our opinions about the basic performance level of current IGP solutions have not always been kind. We felt like the introduction of Vista last year would ultimately benefit consumers and developers alike as it forces a certain base feature set and performance requirements for graphics hardware. However, even with full DX9 functionality required, the performance and compatibility of recent games under Vista is dismal at best. This along with borderline multimedia performance has left us with a sour taste in our mouths when using current IGP solutions from AMD, NVIDIA, and Intel for anything but email, Internet, basic multimedia, and Word; a few upgrades are inevitably required. 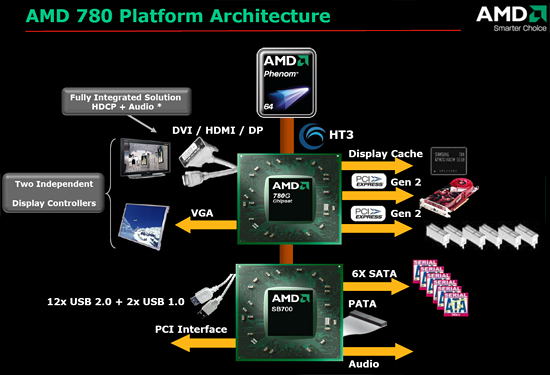 We are glad to say that this continual pattern of "mediocrity begets mediocrity" is finally ending, and we have AMD to thank for it. Yes, the same AMD that since the ATI merger has seemingly tripped over itself with questionable, failed, or very late product launches - depending upon your perspective. We endured the outrageous power requirements of the HD 2900 XT series and the constant K10 delays that turned into the underwhelming Phenom release; meanwhile, we watched Intel firing on all cylinders and NVIDIA upstaging AMD on the GPU front.

Thankfully, over the past few months we have seen AMD clawing its way back to respectability with the release of the HD 3xxx series of video cards, the under-appreciated 790/770 chipset release, and what remains a very competitive processor lineup in the budget sector. True, they have not been able to keep up with Intel or NVIDIA in the midrange to high-end sectors, but things are changing. While we wish AMD had an answer to Intel and NVIDIA in these more lucrative markets - for the sake of competition and the benefits that brings to the consumer - that is not where the majority of desktop sales occur.

Most sales occur in the $300~$700 desktop market dominated by IGP based solutions and typically targeted at the consumer as an all-in-one solution for the family. Such solutions up until now have caused a great deal of frustration and grief for those who purchased systems thinking they would be powerful enough to truly satisfy everyone in the household, especially those who partake in games or audio/video manipulation.

With that in mind, we think AMD has a potential hit on its hands with their latest and greatest product. No, the product is still not perfect, but it finally brings a solution to the table that can at least satisfy the majority of needs in a jack-of-all-trades machine. What makes this possible and why are we already sounding like a group of preteens getting ready for a Hannah Montana concert?

Enter Stage Left; it’s not Hannah, but AMD’s latest edition to their ever-growing chipset portfolio, the 780G/780V chipset. The chipset nomenclature might make one think the 780G/780V is just an update to the successful 690G/690V product family. While the 780G product replaces the 690G, it is much more than just an update. In fact, the 780G is an all-new chipset that features a radically improved Northbridge and a slightly improved Southbridge.

So let’s take a look at the chipset specifications and delve into the multimedia output qualities of the 780G chipset.