April 26, 1997. That's when I started AnandTech, and since then I have been to countless Comdexes, Computexes, E3s, and CESes. Yet in the past ten years I've only traveled to Europe on a handful of occasions and absolutely never for CeBIT.

I've always been scared away from CeBIT for a handful of reasons. I've been told that it's cold, and the living situation is difficult since Hannover itself is a small city and the show itself is huge, attracting close to 500,000 attendees (CES only brings in around 140,000). Despite the warnings, this year I felt adventurous and shortly after returning from CES with the flu I booked tickets to Hannover, Germany for this year's CeBIT.

Most attendees don't stay in Hannover where the show is held; instead they usually stay anywhere from 20 - 60 minutes away and commute into the city. Accommodations range from regular hotels to renting rooms in local houses; the latter was our choice of poison. Internet access is unfortunately not as ubiquitous as we'd like it to be, and I've resorted to roaming on my iPhone far too much in order to get email access. 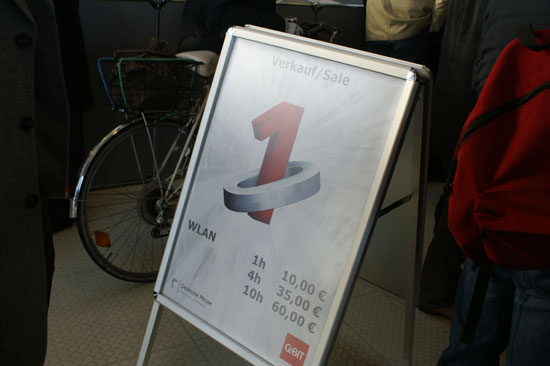 CeBIT offers wireless Internet access at a "low" fee of 10 Euros for an hour ($15.18). Thankfully OCZ was kind enough to let us use their Internet connection at their booth for free.

The weather in Germany this time of year isn't exactly the best, but when it's sunny outside the German countryside is nothing short of beautiful. The area is full of quaint towns that you often read about in books or see depicted in films, and it's a sight to take in. My previous two trips to Germany were straight to airports and hotels, with little time to really soak in the German experience. That's changed with this trip to CeBIT and it's something that, despite being difficult at times, is a good experience.

We arrived at the show by car, parking in a lot a decent distance away from the exhibition calls. While CES is spread over 4 halls and two convention centers, CeBIT is made up of 26 halls - occupying the space of a small town. 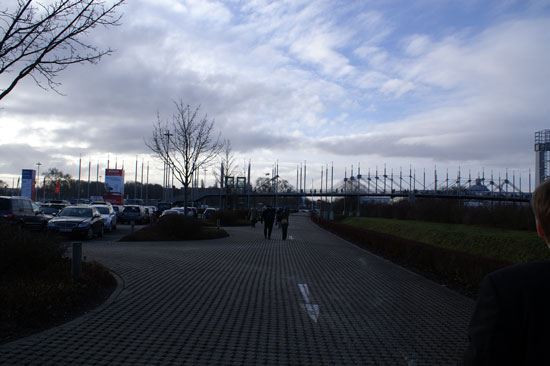 To get to CeBIT we must first walk through the parkinglot and across the bridge you see in the distance. 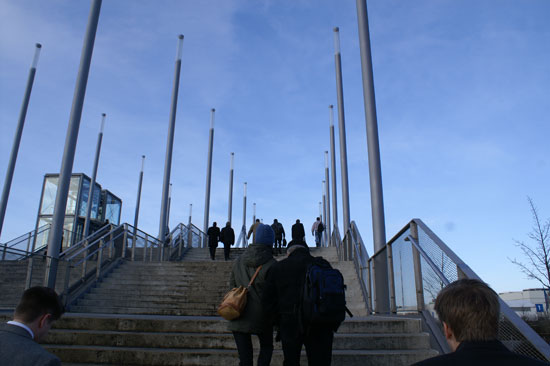 Up the stairs and over the bridge. 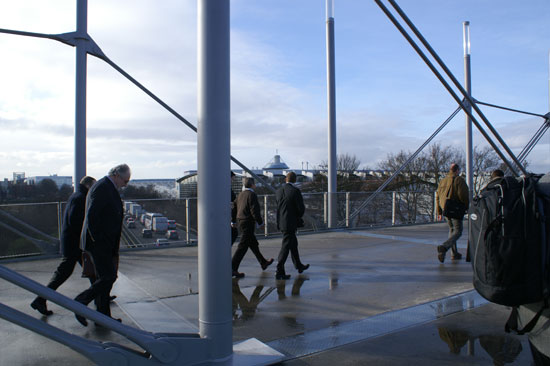 The traffic below is all CeBIT traffic, as we cross over to the exhibition halls. 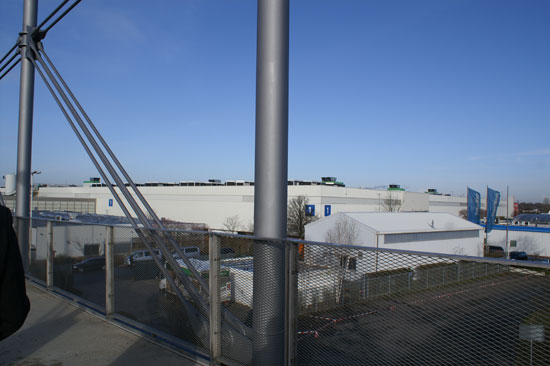 Hall 1 is over to the right side of the bridge into CeBIT. 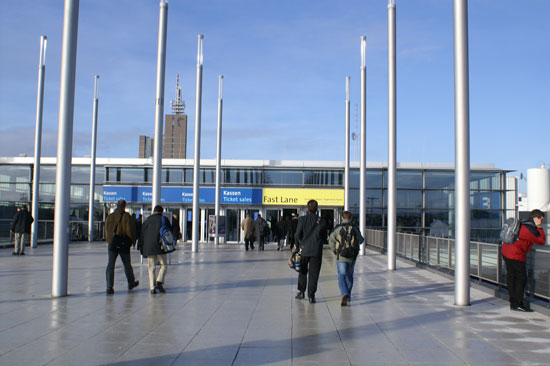 Done with the bridge we see the end in sight; we're almost at CeBIT. 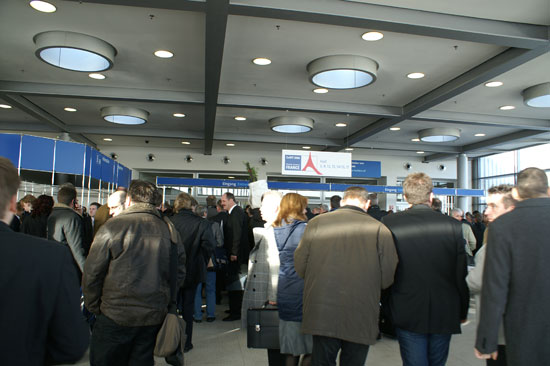 The crowds are intense but not terrible for such a large show. Typical tradeshow badges aren't worn; you simply scan in your pass and you're allowed into the CeBIT area. It's a far more efficient system than your typical tradeshow where badge flashing and scanning is necessary. 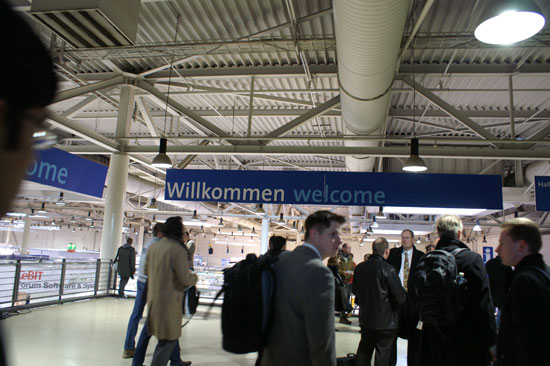 Once inside we're greeted by a bilingual welcome sign; taking 5 years of German has proved marginally useful. It turns out there's a difference between taking German and actually learning the language. 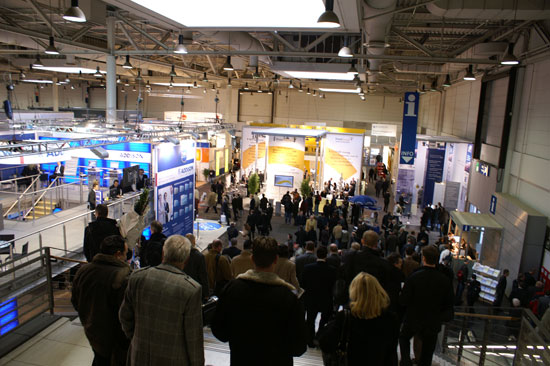 The show floor in Hall 3 is typical tradeshow fare; this hall wasn't particularly interesting for us so we headed over to Hall 2. 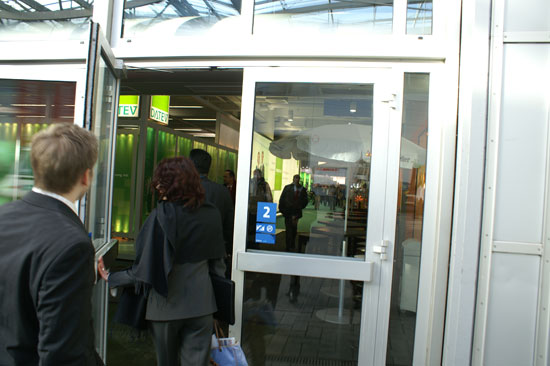 Hall 2 wasn't terribly interesting but was one of the most expensive Halls at CeBIT. 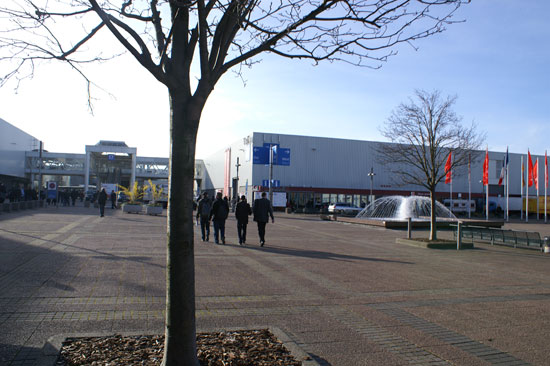 Hall 1 to the right...you get an idea of the scale of these halls from this picture, and there are 26 of them at CeBIT. 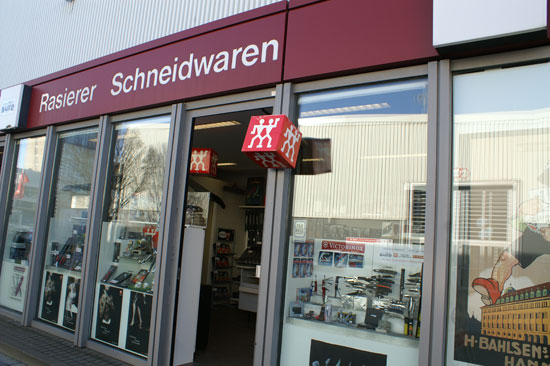 If you need a knife between meetings, CeBIT has you covered. In between exhibition halls we found this useful little store. 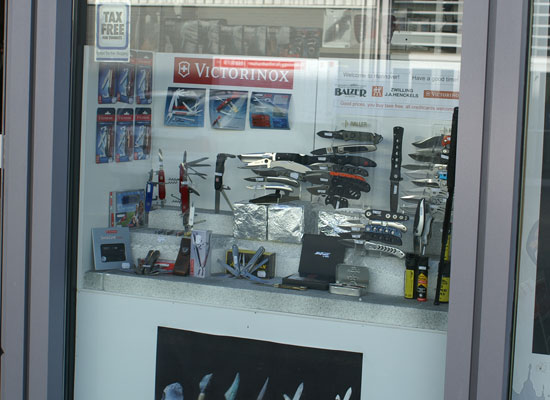 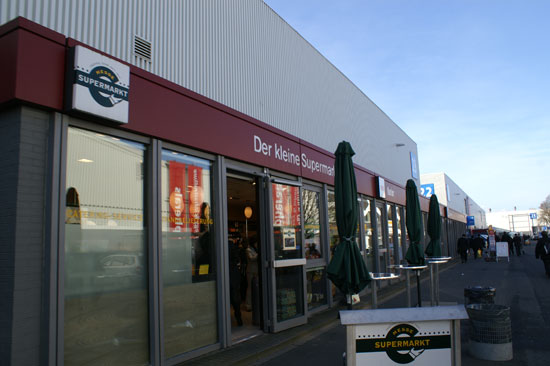 Need food? CeBIT has you covered. It's really like a small town in here.

With our CeBIT backstory out of the way, let's take a look at what we've seen thus far at the show.