What About Battery Life?

What we found in our initial mobile Penryn investigation was that performance was relatively unchanged, but the impact on battery life could be significant. Depending on the test we saw anywhere from a 5% - 20% increase in battery life over an identically configured Merom system. Unfortunately today we don’t have any identically configured Merom based Apple notebooks, all of our configurations vary in one shape or another, eliminating the possibility of a scientifically sound apples-to-apples comparison. But we can come pretty damn close.

We compared six Apple notebooks using the same battery life tests we introduced in our MacBook Air review, the summary of those tests is below:

The wireless web browsing test uses the 802.11n connection to browse a series of 20 web pages varying in size, spending 20 seconds on each page (I timed how long it takes me to read a page on Digg and came up with 36 seconds; I standardized on 20 seconds for the test to make things a little more stressful). The test continues to loop all while playing MP3s in iTunes.

The DVD playback test is simple: I play Blood Diamond in a loop from an image on the hard drive until the battery runs out.

The final test is the multitasking workload. For this benchmark I'm downloading 10GB worth of files from the net (constant writes to the drive), browsing the web (same test as the first one) and watching the first two episodes of Firefly encoded in a 480p XviD format (Quicktime is set to loop the content until the system dies).

The system was set to never shut off the display and never go to sleep, although the hard drive was allowed to spin down when possible. The display brightness was set at 9 blocks (just over 50%), which I felt was comfortable for both day and night viewing.

The MacBook Air was included as a reference, as was the original MacBook Pro based on Intel's Core Duo processor.

Finally we had the two Penryn based notebooks: the 2.4GHz MacBook and the 2.5GHz MacBook Pro, both with their standard 5400RPM HDDs.

In our wireless web browsing test the higher clock speed systems actually fared better, possibly because they were able to render pages quicker and thus enter deeper sleep states faster. Early on in Intel's mobile CPU designing history it realized that the trick to attaining good battery life is to make sure CPUs could complete their tasks as quickly as possible so that they could enter a deep sleep state sooner rather than later. We may be seeing evidence of that in this test. 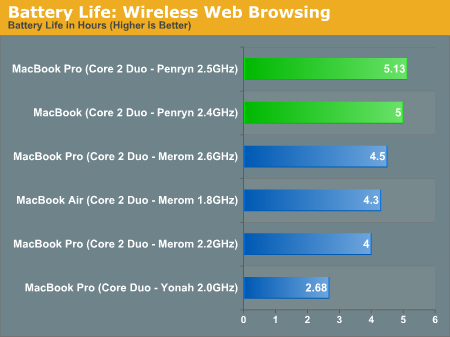 Both the new Penryn notebooks are able to achieve at least 5 hours of battery life in this test. The previous king, our 2.6GHz Merom based MacBook Pro is bested by both models by at least 30 minutes. The Penryn advantage here amounts to 11 - 14%. If you look back at our first Penryn vs. Merom battery test we saw improvements in the 5 - 17% range, so these gains are in line with our expectations. 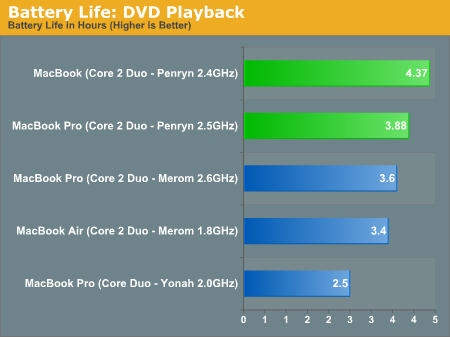 Our DVD playback test shows smaller gains, 7.8% for the 2.5GHz MacBook Pro vs. the Merom based 2.6GHz model. Once again, we saw a 7% increase in battery life in our first Penryn vs. Merom comparison for the DVD playback test and the Apple results are in-line. The smaller display on the MacBook gave it an even longer battery life, lasting over 4 hours - more than enough for two back-to-back movies (and good ones at that).

The stress test left us with a 9% increase in battery life, once again falling within expectations: 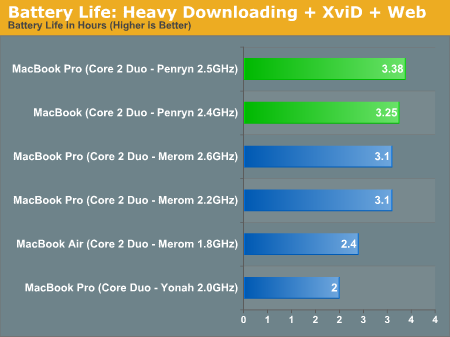 It looks like Penryn is good for a 7 - 15% increase in battery life over similarly configured Merom systems. The improvement alone isn't enough to warrant an upgrade but it's a nice improvement over the previous systems given that you get it at no additional cost. Ah, the beauty of innovation.