Unfortunately Intel doesn't offer the same clock speed CPU in both 3MB and 6MB flavors, so we're left comparing two differently clocked CPUs. In this case we took a 2.4GHz/3MB Core 2 and stacked it up against a 2.5GHz/6MB part, the chart below shows the performance improvement of the 2.5GHz/6MB core over the 2.4GHz/3MB part: 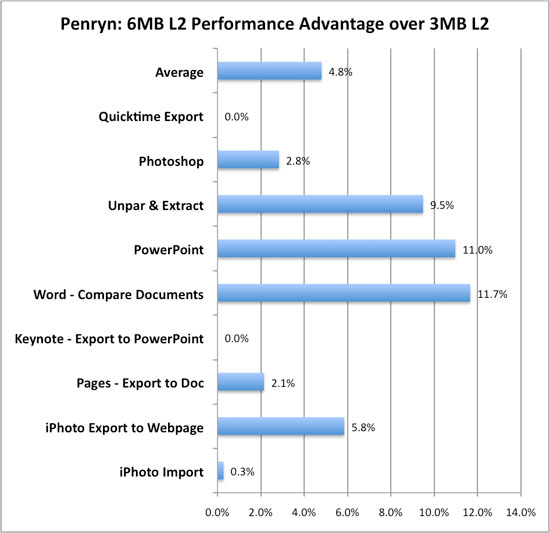 How much does Apple charge for the average 5% improvement in performance? Unfortunately you can't just purchase the CPU upgrade, you have to buy the $2499 model instead of the $1999 model. You get another 50GB of hard disk space (250GB vs. 200GB) and 512MB of video memory along with the CPU upgrade but you're paying an extra $500. Note that Intel only charges Apple an additional $75 for the faster CPU ($316 vs. $241), but since the CPU is soldered onto the motherboard you can't swap chips yourself.

If all you care about is the larger cache, the $500 upgrade cost is a tough pill to swallow. Even the increase in drive space isn't all that attractive for the money. The increase in video memory is nice but 256MB should be all you need for smooth Exposé performance on the 15" 1440 x 900 display.

Our recommendation? If you're going to upgrade your notebook in another 1.5 - 2 years anyways, pocket the $500 and don't bother with the added cache. It's not going to do much for you today.

This performance comparison also means that the base MacBook can offer very similar performance to the MacBook Pro, just as you'd expect. The only reasons to buy the Pro are, as we mentioned, mostly feature-based.