The first aspect of why we believe higher FSB rates are not always better for system performance can be shown using the following calculation to find the actual tRD time in nanoseconds:

We first dissected this equation in our Asus Rampage Formula article, and it remains true today. To recap, a lower tRD time yields faster read data transfer between the memory and CPU.

If we use the equation above to study the actual tRD values at 500FSB and 445FSB, we will see that using a tRD of 6 actually results in a lower tRD delay cycle. This is exactly why the somewhat sensitive UT3 graphics engine shows a discrepancy in 8x500 performance at a higher tRD of 7 (graphs are on page 4) as one example. We notice the same pattern in any application that is latency sensitive.

In order to equal the tRD cycle time of 6 at 445FSB we can rearrange the equation above to find the equivalent FSB requirement at a tRD of 7 quite easily:

Even if the CPU is capable of the additional 152MHz (using an 8x multiplier), the VMCH requirement to achieve a tRD cycle time of 13.48ns at 519FSB would quite simply be off the scale for 24/7 use. At 500FSB and a "Moderate" setting in the ASUS performance enhancing "Clock Twister" BIOS option, we already need 1.65VMCH and can't even begin to run games like Crysis or other applications such as Nero Recode 2. Yet 445FSB and a tRD of 6 still has enough overhead to allow further scaling if the processor is capable. It makes far more sense to make an attempt at 9X461, which is still within reach of our 1.65VMCH limit as shown in the graph below. 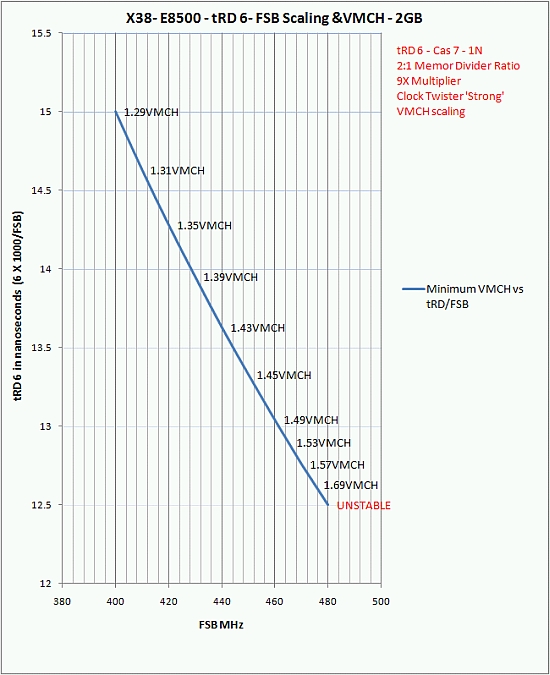 Not only is 461FSB possible, but we also manage to reduce the tRD cycle time even further - down to 12.93ns to be exact. 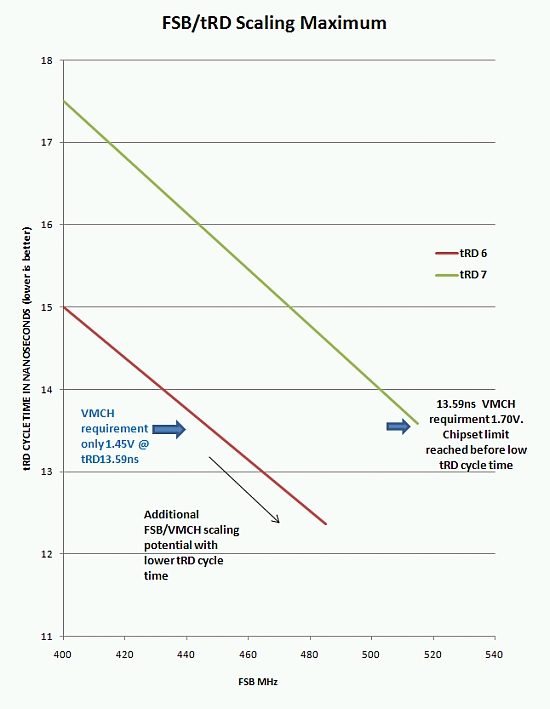 A tRD of 5 is not available on this board; even if it was, it would not be without side effects. The first problem is that 400FSB at a tRD of 5 gives us a tRD cycle time of 12.5ns. This is certainly great, but if we look at the graphs above, it is quite possible that such a low tRD cycle time would leave no remaining overhead in Northbridge voltage for scaling much further than 410FSB (tRD cycle time of 12.19ns). We verified the secondary setting by using the ASUS P5E3 Premium board we have in the labs (which has access to setting a tRD of 5). A tRD of 5 naturally requires the 2:1 memory ratio to achieve a speed of DDR3-1600; at CAS 6 this requires significant VDimm due to the very "tight" CAS latency. Increasing this setting to CAS 7 results in a large performance drop.