It’s hard to say the last year has been anything but rough for Microsoft’s Windows division. Although we found Windows Vista favorable upon its launch last year after watching it go through an usually drawn-out development process, such a sentiment hasn’t been shared by Windows users as a whole. Windows XP proved to be every bit the competition for Vista that Microsoft could ever fear it would be, at the time as when Vista was having its own post-launch pains. It was a bad combination, making for a bad year for Microsoft’s efforts in pushing its first new desktop OS in 5 years. Microsoft was looking to make a solid case for why Vista is a worthwhile successor to XP in a market notorious for a resistance to change, and they failed to do this thanks to a failure in immature technology and an inability to get a consistent and convincing message out.

In the year since then you could make the argument that Microsoft’s marketing efforts still haven’t improved, but you would be hard pressed to make the same argument about Vista itself. Since its release an unfortunately large number of bugs and quirks have been discovered in Vista, which has kept Microsoft busy patching them over the year, while to their chagrin many consumers sit on the side watching. To Microsoft’s credit they’ve done a lot with Vista well before the first service pack, various patches including the reliability & compatibility packs released over the last year have solved many of the earliest complaints about Vista; it already performs better and is less quirky across the board now than when it launched. But it goes without saying that this hasn’t been enough to solve all of Vista’s problems, putting a lot of watchful eyes on Service Pack 1.

There is a saying among software development circles that businesses as a whole won’t touch a Microsoft product until the first service pack; they would prefer to wait until a product has been widely used and the biggest problems identified & solved. It’s cold but effective logic that also puts a great deal of pressure on Microsoft. No matter how good (or bad) a product is, half of their customers won’t bat an eye until there’s a service pack, making the first such pack just as important as the product launch itself in some ways. Complicating matters further with the Vista launch in particular is that Microsoft has tied Windows Server 2008 to the Vista kernel; getting Windows Server 2008 out the door means any and all Vista problems that would hinder server operation need to be eliminated. The result is that Service Pack 1 is a big deal for Microsoft, they need to show consumers that they can fix what still ails the OS, they need to show businesses that it’s now ready for them to use, and they need to show server administrators that the core technology is so good that a reliable server can be built off of it.

Furthermore, with the progression of technology in the last year the timing couldn’t be any more critical. The 4GB address space barrier for 32bit x86 is finally beginning to rear its head with more average computer uses; RAM prices have nosedived with 8GB of RAM going for as little as $160, resulting in a wide and very real need for a 64-bit operating system (and XP64 being a poor fit for consumers). Meanwhile PC OEMs are finally warming up to the Extensible Firmware Interface (EFI) and are ready to start building systems with it, meaning they too must move beyond XP. Even governments are finding they need to move to Vista as of late, as new encryption standards come in to play which only Vista supports.

The result of this is that many different groups have been watching SP1 far more intently than past service packs. With the final version of SP1 in hand, today we’ll be looking at what Microsoft is bringing to the table with Vista’s first service pack. With a combination of new features, bug fixes, and performance improvements, there’s a great deal to this service pack that we’ll be covering so let’s get started. 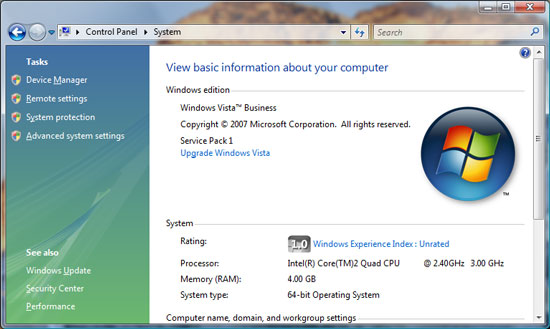