The Intel D5400XS is quite possibly the most impressive part of the entire Skulltrail platform. Naturally it features two LGA-771 sockets, connected to Intel's 5000 chipset via two 64-bit FSB interfaces. The chipset supports the 1600MHz FSB required by the QX9775 but it will work with all other LGA-771 Xeon processors, in case you happen to have some laying around your desk too. 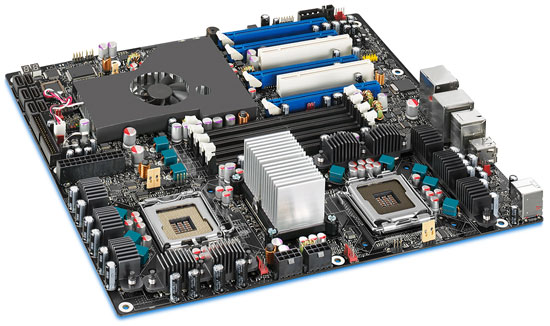 Thanks to the Intel 5400 chipset, the D5400XS can only use Fully Buffered DIMMs. If you're not familiar with FBD, here's a quick refresher taken from our Mac Pro review:

Years ago, Intel saw two problems happening with most mainstream memory technologies: 1) As we pushed for higher speed memory, the number of memory slots per channel went down, and 2) the rest of the world was going serial (USB, SATA and more recently, Hyper Transport, PCI Express, etc...) yet we were still using fairly antiquated parallel memory buses.

The number of memory slots per channel isn't really an issue on the desktop; currently, with unbuffered DDR2-800 we're limited to two slots per 64-bit channel, giving us a total of four slots on a motherboard with a dual channel memory controller. With four slots, just about any desktop user's needs can be met with the right DRAM density. It's in the high end workstation and server space that this limitation becomes an issue, as memory capacity can be far more important, often requiring 8, 16, 32 or more memory sockets on a single motherboard. At the same time, memory bandwidth is also important as these workstations and servers will most likely be built around multi-socket multi-core architectures with high memory bandwidth demands, so simply limiting memory frequency in order to support more memory isn't an ideal solution. You could always add more channels, however parallel interfaces by nature require more signaling pins than faster serial buses, and thus adding four or eight channels of DDR2 to get around the DIMMs per channel limitation isn't exactly easy.

Intel's first solution was to totally revamp PC memory technology, instead of going down the path of DDR and eventually DDR2, Intel wanted to move the market to a serial memory technology: RDRAM. RDRAM offered significantly narrower buses (16-bits per channel vs. 64-bits per channel for DDR), much higher bandwidth per pin (at the time a 64-bit wide RDRAM memory controller would offer 6.4GB/s of memory bandwidth, compared to a 64-bit DDR266 interface which at the time could only offer 2.1GB/s of bandwidth) and of course the ease of layout benefits that come with a narrow serial bus.

Unfortunately, RDRAM offered no tangible performance increase, as the demands of processors at the time were no where near what the high bandwidth RDRAM solutions could deliver. To make matters worse, RDRAM implementations were plagued by higher latency than their SDRAM and DDR SDRAM counterparts; with no use for the added bandwidth and higher latency, RDRAM systems were no faster, if not slower than their SDR/DDR counterparts. The final nail in the RDRAM coffin on the PC was the issue of pricing; your choices at the time were this: either spend $1000 on a 128MB stick of RDRAM, or spend $100 on a stick of equally performing PC133 SDRAM. The market spoke and RDRAM went the way of the dodo.

Intel quietly shied away from attempting to change the natural evolution of memory technologies on the desktop for a while. Intel eventually transitioned away from RDRAM, even after its price dropped significantly, embracing DDR and more recently DDR2 as the memory standards supported by its chipsets. Over the past couple of years however, Intel got back into the game of shaping the memory market of the future with this idea of Fully Buffered DIMMs.

The approach is quite simple in theory: what caused RDRAM to fail was the high cost of using a non-mass produced memory device, so why not develop a serial memory interface that uses mass produced commodity DRAMs such as DDR and DDR2? In a nutshell that's what FB-DIMMs are, regular DDR2 chips on a module with a special chip that communicates over a serial bus with the memory controller.

The memory controller in the system stops having a wide parallel interface to the memory modules, instead it has a narrow 69 pin interface to a device known as an Advanced Memory Buffer (AMB) on the first FB-DIMM in each channel. The memory controller sends all memory requests to the AMB on the first FB-DIMM on each channel and the AMBs take care of the rest. By fully buffering all requests (data, command and address), the memory controller no longer has a load that significantly increases with each additional DIMM, so the number of memory modules supported per channel goes up significantly. The FB-DIMM spec says that each channel can support up to 8 FB-DIMMs, although current Intel chipsets can only address 4 FB-DIMMs per channel. With a significantly lower pin-count, you can cram more channels onto your chipset, which is why the Intel 5000 series of chipsets feature four FBD channels.

As we've seen, the AMB translation process introduces a great deal of latency to all memory accesses (it also adds about 3-6W of power per module), negatively impacting performance. The tradeoff is generally worth it in workstation and server platforms because the ability to use even more memory modules outweighs the latency penalty. The problem with the D5400XS motherboard is that it only features one memory slot per FBD channel, all but ruining the point of even having FBD support in the first place. 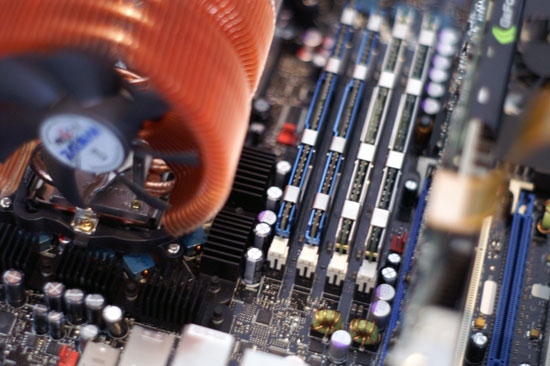 Four slots, great. We could've done that with DDR3 guys.

You do get the benefit of added bandwidth since Intel is able to cram four FBD channels into the 5400 chipset, the problem is that the two CPUs on the motherboard can't use all of the bandwidth. Serial busses inherently have more overhead than their parallel counterparts, but the 38.4GB/s of memory bandwidth offered by the chipset is impressive sounding for a desktop motherboard. You only get that full bandwidth if all four memory slots are populated, but you do increase latency as well. 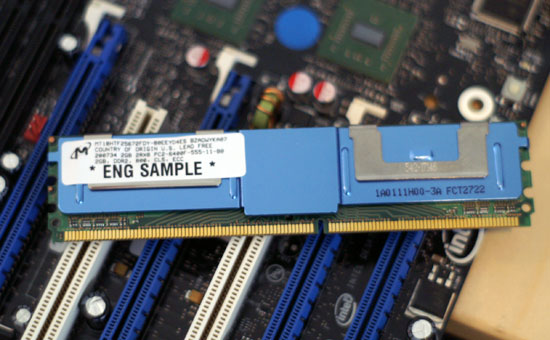 Some quick math will show you that peak bandwidth between the CPUs and the chipset is far less than the 38.4GB/s offered between the chipset and memory. Even with a 1600MHz FSB we're only talking about 25.6GB/s of bandwidth. We've already seen that the 1333MHz FSB doesn't really do much for a single processor, so a good chunk of that bandwidth will go unused by the four cores connected to each branch.

The X38/X48 dual channel DDR3-1333 memory controller would've offered more than enough bandwidth for the two CPUs, without all of the performance and power penalties associated with FBD. Unfortunately a side effect of choosing to stick with a Xeon chipset is that FBD isn't optional - you're stuck with it. As you'll soon see, this is a side effect that does really hurt Skulltrail.