A Discussion of Specs

This is as good a time as any to talk about the specifications of the MacBook Air, something we did for the Mac Pro when it was first launched. To understand the MacBook Air you must first accept that it's not aimed at the same target market as the regular MacBook or MacBook Pro. Unfortunately, a side effect of Apple's very strong marketing is that many who shouldn't be considering the MacBook Air, are.

The MacBook Air is designed to compete in the ultra-portable space, where compromises are inevitable and prices are very high. The compromises get less and less severe as the years go by; technology gets better, Moore's law makes things faster and you can generally do more in less space. The first ultra-portable I owned was a Sony Picturebook C1VN; it used the Transmeta Crusoe processor which was unbelievably slow (barely the real world speed of a Celeron running at 400MHz), the screen was horribly cramped, the keyboard was beyond annoying to type on and overall system performance was hardly acceptable. It was very portable though, and with enough extended batteries pulling 12+ hours wasn't a problem - perfect for a flight to Taiwan.

The problem with my Picturebook and every other ultra-portable I've owned (including the sub-2lbs Sony X505) was that I'd get to a point where my productivity suffered too much and I'd switch to a larger, but more usable notebook. The keyboards were too small, the performance too low or the screen resolution insufficient; there would always be a reason and I'd end up abandoning my sexy little notebook for something more practical.

To cover this year's CES, ASUS sent us all one of its U1E ultra-portables. The notebooks actually worked very well and the U1E was the first ultra-portable I'd seriously used since my X505. The keyboard wasn't as bad as what I had on the X505, although the shape and size of the U1E wasn't too far off the amazing Sony. Performance was absolutely abysmal, but as long as you didn't turn the system off (hibernate worked far better) you didn't have to deal with an unbelievably painful boot process. Battery life wasn't even that bad, since all you wanted to do on the machine was type in notepad. 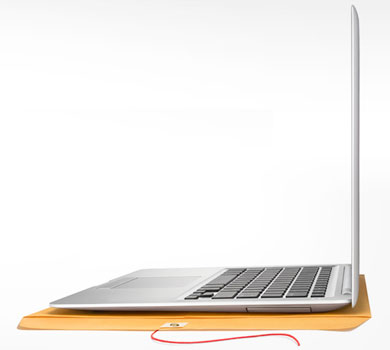 The MacBook Air, at least on paper isn't all that special, it's simply Apple's attempt at an ultra-portable. Honestly, the MacBook or MacBook Pro is a better solution for the vast majority of people, and I'm not completely convinced that the perfect ultra-portable is even possible with today's technology.

Performance appears to be all but solved. The fact that Apple can cram a nearly-2GHz Core 2 Duo into the MacBook Air either means that Moore's law has caught up with our desires or Apple is going to make it so you can no longer have children.

The hard drive is a definite weak point of the MacBook Air, but the SSD option is bound to fix slow disk performance in this ultra-portable devices. Unlike mechanical hard drives, you don't give up performance to get a physically smaller drive - it's simply a case change. The 1.8" SSD in the MacBook Air will offer the same performance as a 2.5" SSD, something that can't be said about 1.8" hard drives vs. 2.5" and 3.5" offerings.

Cost is going to be a problem, but it looks like Apple isn't really overcharging for the 64GB option. Apple's cost on the 64GB SSD is at least $800, making the markup to $999 justifiable. You can probably save yourself some coin by snagging a 32GB drive aftermarket but you won't save much buying your own 64GB drive, at least in the near future. Thankfully since SSDs are based on Flash, price will continue to drop over the coming months/years making it a more affordable option on the Air.

The lack of a user replaceable battery is less of an issue as you'd think at first glance. The biggest problem is that you can't carry a spare, but lugging around an extra battery would really eat into the MacBook Air's portability factor. Chances are that within 2 years you'd be able to get the portability of the MacBook Air with even fewer compromises, or purchase something even more portable - so the usefulness of such a product is more limited than most computers. It's an expensive proposition, especially when you keep in mind that you'll be tempted to replace it in 2 years, but this is how the ultra-portable world turns.

Apple is putting a lot of faith in the ubiquity of WiFi, given that it's the only way to get online with the MacBook Air. It's not unusual to see a lack of connectivity options on such a small computer, my old X505 didn't even have integrated wireless - the motherboard was too small, you had to use a PC Card. The problem is that WiFi isn't quite everywhere, WWAN or Ethernet are necessary to ensure connectivity in more places. There is a single USB port on the MacBook Air so you can always connect a 3G dongle from a cellular provider, but that's a more clumsy solution than simply sticking in an ExpressCard.

The screen resolution on the MacBook Air is a bit low for my tastes, but OS X does a good job of window management so it's possible that productivity won't be hurt too much.

The full sized keyboard is a welcome change from most ultra-portables; for someone who does a lot of writing, it's quite possibly the most important feature of the Air. My concern still ends up being whether the MacBook Air will be another in a long list of ultra-portables that simply loses its appeal after a while. We'll know for sure soon enough.