With over a year of experience overclocking the Core 2 family of processors, we have learned a thing or two. One of the most important items we've learned is that higher FSB settings do not necessarily mean better performance. Understandably, this may come as a shock to some. For whatever reason, even a lot of well-regarded, seasoned overclockers seem to place great value in achieving the highest possible FSB. Based on what we know, we always establish our base target MCH overclock at the same spot - 400MHz FSB with a tRD of 6. The only other potential base MCH target value even worth considering is 450MHz with a tRD of 7, which should only be used when extra memory speed is needed or when a low maximum CPU multiplier becomes a limiting factor. Without getting into too much detail, let's examine what we mean by this.

When it comes to overclocking, the MCH functions as a hybrid of sorts. Like a CPU, it has an upper frequency limit and more voltage can often raise this limit. On the other hand, since it interfaces with memory it also behaves somewhat like memory with internal "timings" whose absolute values derive from the established FSB.

Consider the case of memory rated to run DDR-800 at CAS 3. We can calculate the absolute CAS (Column Address Strobe) delay in a few quick steps. DDR-800, which is in fact double date rate as the name suggests, runs at a base frequency of 400MHz or 400 million cycles per second. Inverting this value tells us the number of seconds per cycle (2.50ns). Finally, multiplying this by the CAS rating tells us the total delay time of 7.5ns (3 x 2.5ns). Likewise, setting a CAS value of 4 results in an absolute CAS delay of 10ns. We can see now why higher CAS values give way to lower memory bandwidths - in the case described above the MCH spends more time "waiting" for data to become available when the memory is set to CAS 4. 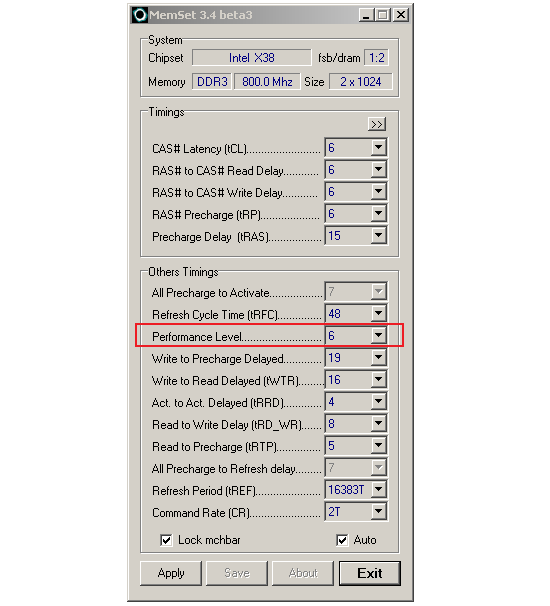 Arguably, the most important MCH setting when it comes to performance tweaking is the Static Read Control Delay (tRD) value. Like the memory CAS (CL), setting this value is relative to FSB. Case in point, a tRD value of 6, calculated in the same manner as used before, tells us that MCH sets a read delay of 15ns at an FSB of 400MHz. This means that in addition to the time required for the CPU to issue a request for data in memory to the MCH, the time the MCH spends translating and issuing the command to the memory, and the time the memory requires in retrieving the requested data, the MCH will spend an additional 15ns simply waiting for valid data to become available before fulfilling the CPU's original read request. Obviously, anything that can minimize this wait will be beneficial in improving memory read bandwidth and quite possibly overall system performance.

Until recently, direct tRD manipulation by the user was not even possible. In fact, for the longest time BIOS engineers had no choice but to accept this setting as essentially "hard-coded", making MCH performance rather lackluster. The only way to increase memory subsystem performance was to run at higher FSB settings or tighten primary memory timings. At some point, the MCH design teams got tired of the CPU people hogging all the glory and in a well-calculated effort to boost MCH performance exposed this setting for external programming.

The outside world's first introduction to variable tRD settings came when a few overclockers noticed that setting lower MCH "straps" allowed for higher memory bandwidths. What they didn't know at the time was that they had unintentionally stumbled upon tRD. Tricking the motherboard into detecting an installed CPU as an 800 FSB (200MHz) part forced the MCH into setting a lower tRD value than if the FSB were 1066 (266MHz). Consequently, overclocking the system to the same higher FSB value with the lower strap setting yielded higher memory performance. Often times the effect was significant enough that real-world performance was higher even with a lower final FSB. The tradeoff was apparent however: a lower strap meant a lower maximum FSB. The MCH tRD value, just like a memory timing, must eventually be loosened in order to scale higher. What's more, as is the case with memory, additional voltage can sometimes allow the MCH to run with tighter "timings" at higher speeds.

Eventually the inevitable next step in memory performance tuning became a reality. The option to adjust tRD independent of MCH strap selection became part of every overclocker's arsenal. Nowadays the MCH strap setting does little more than determine which memory multiplier ratios are available for use. Although tRD adjustments are now possible in many BIOS implementations, some motherboard manufactures choose to obfuscate their true nature by giving the setting confusing, proprietary names like "Transaction Booster" and the like. Don't let these names fool you; in the end they all do the same thing: manipulate tRD.