The Muse R-Duo is an intelligent RAID offering, meaning the hard drive(s) appear to the host system as a single physical drive. The enclosure handles all RAID functions - RAID 0, RAID 1, stacked (or "big"), or linear - internally. In the case of the latter, the system can access the hard drives independently, foregoing any RAID benefits. Whichever option is chosen by the user (other than linear), the R-Duo configures the array internally, and presents a single volume to the host OS as a finished product. This cuts down substantially on the processing power required by the system, and makes this a "true" RAID product, differentiating itself from many competitors who simply put multiple drives in a single enclosure and call that RAID. Connectivity to the host system is via either USB 2.0 or eSATA, and the Muse supports hot-swapping.

In a slightly different twist on multiple drive enclosures, Thermaltake has opted to put the PCB in the center of the enclosure and mount the two hard drives in opposing fashion. This setup (rather than conventional methods, using a separate backplane) makes the enclosure itself somewhat smaller, but could potentially expose the PCB to more heat than it otherwise might experience. 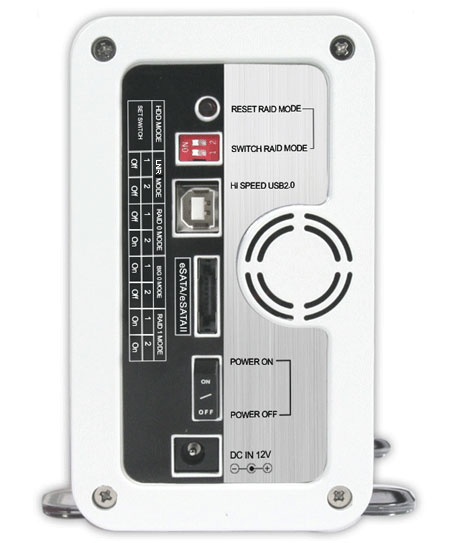 Another twist to the R-Duo is the use of dipswitches as a means to select which RAID function the device will provide. There are two of these switches on the back of the unit, along with writing on the case identifying what each combination will accomplish. The modes supported by the Muse R-Duo are:

Linear - The Muse exposes the drives as standard hard drives. RAID functions of the controller are disabled.

Big - The Muse combines both drives into a single, large volume (i.e. a variant of JBOD - Just a Bunch Of Disks). The drive capacities do not need to be matching, though there is no striping or other performance benefits. In this way, two older hard drives (i.e., a 200GB drive plus a 320GB hard drive) would form a single 520GB volume. The Muse uses the first drive until it's full and then begins writing to the second drive.

RAID 0 - In standard RAID 0 fashion, both drives are striped and combined to form a single volume. If the drives are of differing capacity, the Muse uses the smaller capacity on both drives, resulting in a total volume size double the capacity of the smallest hard drive found in the enclosure. Under normal circumstances, this is the highest performing RAID flavor available.

RAID 1 - One drive is used as the data access drive (the drive which "faces" the operating system), while a copy of the data is kept on a second drive (written to both drives at the same time, to ensure data integrity). If one of the drives fail, the volume remains available for use without interruption. The volume size is the capacity of the smallest hard drive in the array.

Note: The initial release of the Muse R-Duo had a capacity limit of 750GB per drive (1.5TB total). Newer models now support capacities of 1TB per drive, and Thermaltake updated their website to reflect this fact. Also, to read up on the full details of the RAID functions supplied by the Muse R Duo, please check our earlier RAID primer here.