RAID, while initially overused in desktop configurations, has found a more stable home among knowledgeable users over the past year. Where "RAID 0" became a buzzword equaling "high performance" some years ago, the trend has recently shifted towards people researching their decisions and acting accordingly. These informed consumers have begun to notice that indeed, not all RAID implementations are equal - some controllers perform better than others do, and most importantly, some handle failures and other unexpected events much more smoothly. It is with this mindset that we turn our attention once again to some of the newer RAID offerings, beginning with a RAID enclosure from Thermaltake.

Founded in 1999, enthusiasts recognize Thermaltake for their heat management portfolio (coolers, fans, etc). Indeed, the company has only recently moved into the storage arena - so recently, in fact, that their "Company History" page omits any mention of the product line. When browsing said line, however, it's clear that Thermaltake has had a lot of recent activity in this regard, and now offers products ranging from data cables through RAID enclosures. The question, obviously, is this: Is Thermaltake intentionally downplaying the presence of their storage offering due to lackluster performance, or do they have powerful weapons hidden in their storage arsenal? We'll look at their Muse R-Duo product, and see how it fares under a variety of conditions. 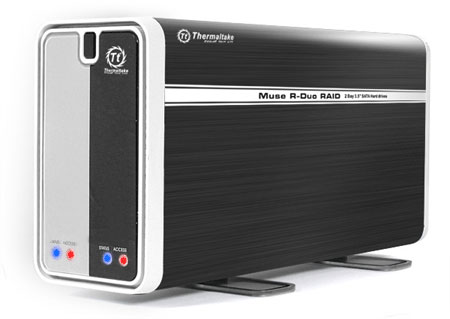 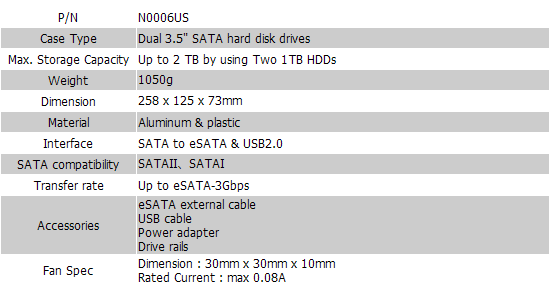 The Thermaltake Muse R-Duo is an external aluminum enclosure, housing up to two SATA hard drives. The unit is made primarily of aluminum, both for the frame as well as the brushed aluminum housing. Rather than relying solely on the aluminum housing to dissipate the (often substantial) heat generated by two active hard drives, Thermaltake has opted to put a 30mm fan on the back of the enclosure, providing both active and passive cooling. The unit can rest on either its side, or using the rotating stand found at the bottom of the device.