Moving on to performance with the stock UT3 maps, these do not involve any first-order physics to the best of our knowledge. However it’s still entirely possible to improve on second-order performance. 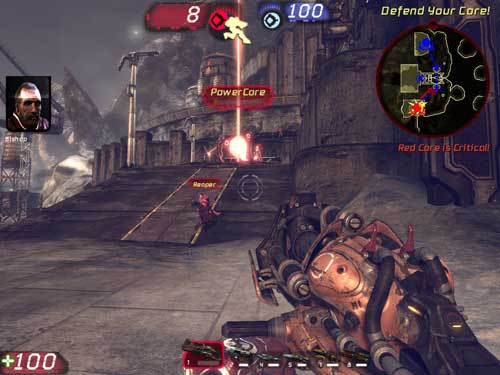 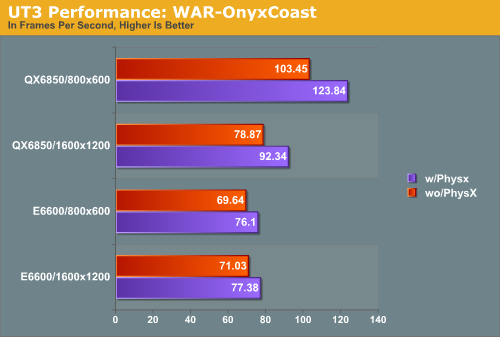 When we were originally benchmarking for this article, we started and intended to finish with WAR-OnyxCoast, an arctic-themed Warfare mode map that offers the full gamut of UT3 weapons and vehicles. What we found surprised us, so much in fact that we didn’t originally believe the results had we not been the ones doing benchmarking ourselves.

Against our initial expectations, WAR-OnyxCoast shows a performance improvement with the PhysX PPU installed, even with the light physics work being done. This is most obvious with our QX6850, where performance increases a respectable 15-20%. We ran this test several times more than the rest of our tests just to make sure this wasn’t a fluke or a product of botmatch variations and it’s not, there’s a definite performance improvement.

What’s driving this performance improvement we can only hypothesize on, compared to the more muted improvements with our E6600. Our best guess is that we’re CPU limited with the slower processor, with the limiting process being something other than physics (possibly bot AI), whereas that limit lifts with a faster processor. Of course we’d expect with more processing power the CPU would have no trouble keeping up with the PhysX PPU, but this doesn’t appear to be the case. It’s possible we’re still CPU and GPU limited on this map (explaining the change from 1600x1200 to 800x600), but we’re going to have to settle with the fact that we have a mystery on our hands for now.

Based on our results with WAR-OnyxCoast, we’ve also benchmarked CTF-Coret and WAR-Floodgate, to see if we can repeat those performance improvements, this time only with our QX6850. 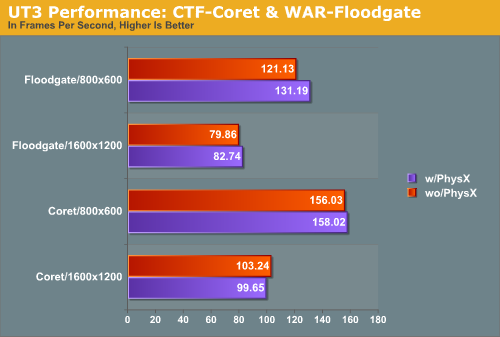 Unlike WAR-OnyxCoast, neither of these maps showcases a large enough performance improvement with the PhysX hardware to positively confirm our earlier results. WAR-Floodgate is most like WAR-OnyxCoast out of these two additional maps, so it’s not particularly surprising that it peaks with an 8% performance improvement, but this is very close to the threshold for botmatch-induced variability, so it’s not conclusive. Meanwhile CTF-Coret flips between gaining and losing a marginal amount of performance, so we can be sure that it’s acting entirely within our experimental variability.

Looking at all of our results then, is the PhysX PPU improving performance under UT3’s stock maps? Probably. We can’t rule out other possibilities with the data we have, but our best explanation is that given a big enough map with enough players and vehicles, and enough of a computer to not be held down elsewhere, the PhysX PPU is giving us a measurable performance improvement of 10-20%. However we also have to keep in mind that with the frame rates we were already getting and the kinds of maps we believe this benefit is most pronounced on, that it’s not making a significant difference.