Sparkle 8800 GT Passive: The Fastest Silent GPU in the World

So about that pricing...

NVIDIA's GeForce 8800 GT launched to much praise from us, you all and other reviewers altogether. We've got a roundup of 8800 GTs in the works and today we're looking at a very special 8800 GT that those building silent PCs may be interested in. But, before we go much further must address the current situation with 8800 GT pricing and availability. There are a couple of givens:

1) GeForce 8800 GT availability is extremely limited, and
2) Pricing is much higher than expected

A quick look at Newegg shows that most cards are priced between $270 and $320, but almost all cards are out of stock at this time. If you're willing to spend a little more you can find cards selling for $330 - $350, but then you run into some very creative pricing on shipping.

Our own Gary Key took screen shots of his checkout cart at three different stores, pay attention to the rates for overnight shipping: 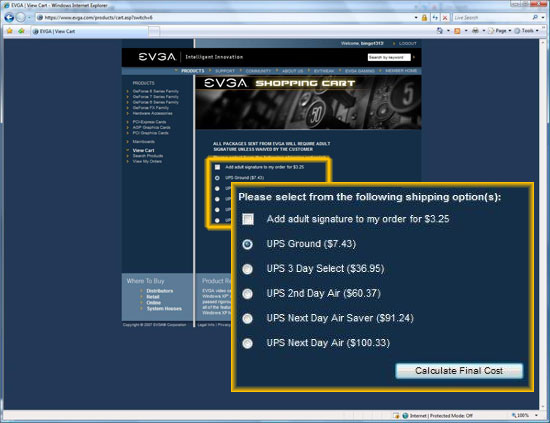 $100.33 for next day air shipping, does it come wrapped in Italian leather? 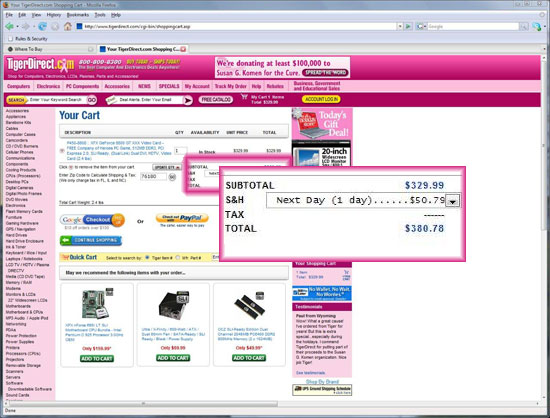 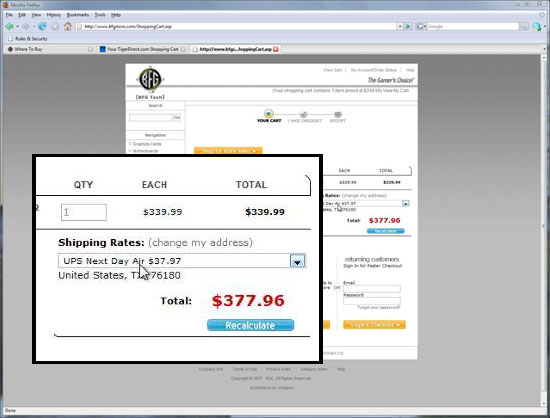 If you want one of these things right away it looks like it'll cost you as much as $100 to get it shipped overnight. Who said patience doesn't pay off? Factor in some sort of speedy shipping and you're looking at close to a $400 investment for what was supposed to be a $250 card. With the fruits of capitalism come the inevitable sour grapes, the 8800 GT is a hot item and vendors will do whatever they can to maximize profit on it.

AMD is convinced that this is all a giant conspiracy by NVIDIA to hurt the launch of the Radeon HD 3800 series. Create buzz for a product that on paper destroys the Radeon HD 3870 but don't produce enough to actually make that happen. You have to admit, based on NVIDIA's promises the initial 8800 GT reviews were beyond glowing; but honestly, if we had to write the review today, even knowing the availability problems, the card still gets our recommendation - just at a higher price point.

The fact of the matter is that if you're patient and put in a pre-order with a vendor, you can actually get one of these things at less than $300, just not at $250. AMD should be happy because if the 8800 GT were actually a $250 card, the Radeon HD 3870 would have no place in the market. Instead, we've actually got a very nice set of options:

But if you're building a HTPC or just want a silent PC and happen to be a gamer, there's one particular flavor of 8800 GT that will interest you the most.

The night before our 8800 GT review went live, Derek called me and let me know that Sparkle sent along images of a passively cooled 8800 GT. Said one word: "impossible". I told him that it had to be a Photoshop because there was no way you were going to get an 8800 GT running without a fan, the card was simply too hot.

The 754M transistors that make up G92 were simply switching too fast and dissipating too much heat to be cooled by anything without a fan. Sparkle could’ve lowered the clocks, that would’ve made it possible, but I thought there was just no way at stock speeds. And Sparkle was promising a bone stock 8800 GT, sans fan.

I had honestly forgotten about the card until I started work on the 8800 GT roundup, and there it was, in its innocent white box: 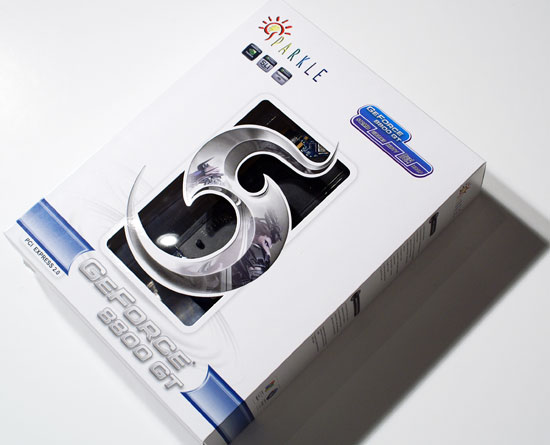 I was still skeptical. We've received passively cooled video cards before that wouldn't even work at their stock speeds due to inadequate cooling. We had one 7600 GT in particular back when we were working on the Silent GPU Roundup that wouldn't even work at stock clock speeds in any 3D games, and we went through three samples before everyone determined that the card just couldn't be sold.

But in the back of my mind I was hopeful, after all, the idea of having a 8800 GT without a fan was simply too good. We've already benchmarked the 8800 GT and shown that it is faster than the vast majority of NVIDIA's lineup, easily offering 8800 GTX performance at a lower price. Since a silent 8800 GTX isn't possible, the 65nm G92 GPU on the 8800 GT could just make a few dreams come true.