Because of the nature AMD's poor financial situation, the key to the company's recovery must lie in its technology. In the processor market, AMD's position as a provider of low-cost, mass market CPUs is unsustainable given the costs of R&D for future processors, so they need to make the kind of technological advances that will launch them back to the top. Their graphics operation is under a similar premise, although their position there is not nearly as far behind the market leader.

We'll start with AMD's best strength right now: servers. 4 years ago AMD made a very, very good choice in creating and using HyperTransport, as this has scaled much better with 4P and higher systems than the traditional front side bus has. AMD's choice to use an integrated memory controller and NUMA has also worked out very well, as they can use large banks of traditional DDR2 DRAM instead of needing to use FB-DIMMs to achieve such large banks.

Both of these choices have enabled AMD to be very competitive with Intel in the server market, which is great news for the company as server processors (especially 4P and higher) are products with high margins that can be funneled back in to R&D and other projects. At this point AMD can't claim the best server performance scores across the board, as the Intel's Core 2-derrived Xeon chips can muster more overall performance, but the situation is such that the Xeon is being hobbled by the FSB and FB-DIMMs, which increases AMD's relative competitiveness. Furthermore, even with their older K8 processors AMD has been able to offer very good performance the performance-per-watt category, a metric of particular importance to datacenter operators who are using blade-style servers and other setups where there are practical limits on how much heat can be dissipated.

Q3 saw the launch of the Barcelona design, a particularly important change for AMD. They can now offer chips that have better overall performance than their old chips, and they have a quad core design to compete with the quad core chips Intel has been offering for some time now. This has closed some of the gap that has formed over the last year as Intel outpaced AMD, and as a result Q4 is going to be a big quarter for AMD as it will be the first full quarter with the Barcelona shipping. Unfortunately Barcelona isn't a new Intel killer, at current clockspeeds it's still underperforming Intel's best chips, and we don't know how much that is going to change. 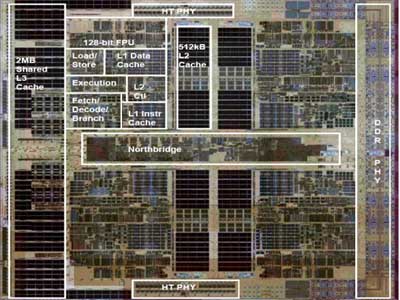 Intel has the 45nm advantage, meanwhile AMD was unable to get a suitable amount of 65nm K8 chips to clock as high as the older 90nm K8s, so we're a bit concerned on just how good AMD's 65nm process is. This doesn't preclude the possibility that K8 scaling problems were due to design issues and not process issues, but AMD has never released enough information one way or another that we can put our worries to rest. For now AMD is in a respectable position, they can't offer the best server performance, but it's good enough for the current market. And while it's entirely plausible that their server division could do very well in the long term even if they were always behind Intel by a small amount, it's not an idea that is a good one to test. Simply put: AMD needs to raise its clockspeeds enough to completely compete with Intel if they want a guaranteed recovery in the server markets. For Q4 at least this isn't going to happen, and we're going to be looking at 2008.

Moving on to consumer processors, it's virtually the same story. The first numbers for Intel's latest high-end 45nm Penryn parts is very good, meanwhile we aren't expecting AMD to be able to match those parts with the Phenom line this year. Much like Barcelona, Phenom is still an important launch because it closes the gap, but AMD doesn't have other technological advantages here like they do in servers to offset this gap. Right now the Phenom launch won't push the company back in to profitable territory, but it will enable AMD to raise their average sales prices and cut some of the loss. Phenom's effect on AMD's situation will be much greater once it has shipped for a full quarter in 2008. Q4 however is seeing the first full quarter of AMD manufacturing at 65nm exclusively which is helpful for margins. With the shutdown of Fab 30 AMD no longer has any 90nm production facilities (although partner Charter may still be able to produce 90nm parts).

As for the graphics side of AMD's business, how Q4 will go may as well be anyone's guess. We know AMD will be launching a new line of GPUs this quarter, but we don't know how many, or with what kind of performance. In total performance the X2900XT was not enough to beat the GeForce 8800GTX, which deprived AMD the chance to sell extremely high-margin parts. The GPU industry, more so than even the CPU industry, is heavily biased in sales at the low end, so AMD was fortunate in that they missed out on comparatively few high end sales. This is a market where it's entirely possible to focus on volume sales and reach profitability, without the need to compete at the very high end of the performance spectrum. AMD's graphics division was after all almost profitable for the quarter, so no significant changes are required to reach at least some level of profitability.

But in the future AMD risks falling in to a trap similar to the R&D costs trap of the CPU industry if they aren't developing the high-end technology that will filter down in to lower products. With that said much of this rides on what their next generation of GPUs can do. We have no reason to expect AMD to be comparatively any worse off than they were with the Radeon HD2900XT, so what we're really looking as is if they can improve and by how much. A GeForce 8800GT killer is a must, so we're looking forward to seeing such a product hit the market.

We are slightly concerned however that they haven't made a particularly strong effort to push the GPGPU aspects of their GPUs. Like server CPUs, GPUs in a high performance computing GPGPU environment can fetch high margins, and rival NVIDIA has made a very focused effort to capture this market. We'll have more on this issue specifically in a future article, but for now it's an oddity that AMD hasn't taken better advantage of this market.

Wrapping things up, this quarter will see the launch of the first of AMD's new 700 series chipsets to coincide with the Phenom launch. Chipsets are a great revenue source to go with CPU sales, so it's to AMD's advantage here to pair up more of their chipsets with their processors, instead of letting NVIDIA have such a big piece of that market. AMD's embedded division will be seeing a lot of fanfare with the first major Geode-using OLPC shipment going out this year, but as the OLPC is strictly a non-profit venture this won't immediately help their situation. However it could spur for-profit sales, which would be a good thing for the company.

We won't attempt to sugarcoat AMD's Q3 and say it was any kind of recovery quarter; it was simply the latest in a string of bad quarters for the company. AMD is in a price war with Intel it is so far winning, but is costing the company too much right now. Furthermore the acquisition of ATI has proven to be very costly, and the direct costs of the acquisition and the borrowing for it are not treating AMD well. They can't have too many more of these quarters, and while things are going to get better on the business side as loans and other costs are repaid, Q4 will more than likely also be a losing quarter for AMD.

The best AMD can hope for in the rest of Q4 is cutting their losses, and this is something that is going to be executed through their technology. The Barcelona Opterons and the new Phenom processors can't reverse the company's fortunes in this quarter, but they are closing the gap with Intel, raising AMD's margins, and breaking the cycle of the painful price war AMD has been in. AMD will always be at some technological disadvantage compared to Intel due to Intel's better manufacturing process technology, which means AMD needs to be all the smarter with the advantages they do have, and Q4 will be about using those advantages. Meanwhile depending on what AMD releases for GPUs this quarter, their graphics division may finally start turning a profit for AMD, further absorbing AMD's other losses.

It's admittedly painful to see AMD in their currently situation. As consumers, things are best for us when both AMD and Intel (and AMD and NVIDIA) are at each others throats, and this isn't the case right now. AMD isn't going anywhere yet, but AMD needs to be at Intel's throat soon if they ever want to do it again.

AMD By The Numbers
Tweet
PRINT THIS ARTICLE
Comments Locked