Considering the IGP market accounts for almost 90% of PC shipments, it's very apparent that boards in this sector must meet a wide variety of goals in order to be successful. If nothing else, they must be the jack of all trades but master of none. The Intel G33 chipset reminds us of that philosophy.

What we basically have in the G33 chipset is a P35 core with a "GMA950+" IGP unit tacked on it. This means the G33 based boards will perform very well in a variety of tasks that do not rely on video processing power. While the video capabilities of the G33 will suffice for running Vista Aero, just about any office application, and a wide variety of non-3D based games, it is not up to the task of running the latest games, decoding 1080P HD content, or even providing decent video capabilities for a media station.

At the same time the video output is limited to analog only unless the motherboard manufacturer adds in a separate SDVO chipset, something most are not willing to do based upon the extra cost. While this output capability may suffice for some, the majority of monitors being sold today for PC use have DVI capability with HDMI quickly gaining traction. All of this is a moot point if you pair the board with one of the latest GPU solutions, but at the same time why should you need to if the competition is already offering HDMI 1.2 output, DVI output, 1080P playback capability, accelerated WMV playback, a superior Aero experience, and even better gaming performance? Okay, not that much better on the last, but enough that most people will notice if casual gaming is important to them.

We are generally disappointed with the video capabilities of the G33 chipset if it is not evident by now; however, we know Intel is addressing the majority of these concerns in the upcoming G35 release that features the new X3500 graphics core. With that said, the general performance of the chipset in applications is very good and with the addition of a dedicated GPU card would make for an excellent SFF platform. 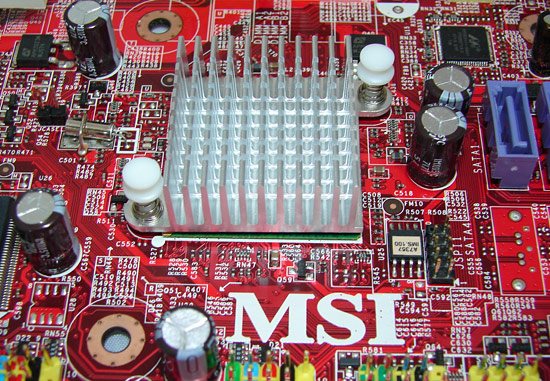 As for the boards based upon the G33 chipset, each one is designed for a different market sector with the ASUS board going after the SOHO crowd, Gigabyte after the SFF gaming crowd, and MSI after the general business or casual home user. They all succeed in some form or fashion in their intended market space, though there are a few surprises.

Overall, we liked the ASUS board best. While it did not excel in every area, it was consistently good in each area. Overall compatibility with a wide variety of components and applications is better than the other two boards. It just seems as if any CPU, memory, video card, auxiliary card, input device, or storage item works well with it. This is not to slight MSI or Gigabyte as their compatibility with peripherals is excellent also, but these other two boards at times require certain BIOS settings or changes to function properly when the same components are plug and play on the ASUS board. The ASUS P5K-VM also offers the best overall performance of our G33 based boards and is certainly the easiest one to work with when overclocking. It is difficult to put into words, but the board simply works as it should -- sadly something that we can't say about some of the other offerings in this market.

If you plan on using one of these boards as a basis for a gaming system or in an SFF system and do not plan on serious overclocking, then the Gigabyte board probably has the best option list available and is the only board to offer RAID via the ICH9R and more than 5 SATA ports. Also, the Realtek ALC889a is an improvement over the ALC888/883 codecs utilized in the other boards. We prefer the general layout of the Gigabyte board and it offers very good stock performance, but it's a disappointment when overclocked compared to the other two boards. We have also grown tired of the Crayola color scheme, Ctrl-F1 "Top Secret BIOS options", and the lack of fan headers on the DS series of boards. That said, the board's use of quality components, support, and overall construction usually has us overlooking the other negatives, but not for too much longer. Then there's the price, which at $15 more than the ASUS and $40 more than the MSI is quite difficult to justify for some in this market sector.

That brings us to the MSI board. It has the lowest price of the group at $92.99 or less, and it's designed for the office crowd. It is the only G33 board to offer eSATA, although it limits the on-board SATA connections to three and still offers Firewire 400. The stock performance is very good and overclocking is excellent with a 1066 or 1333MHZ FSB processor -- provided you have proper CPU cooling as this board will require slightly higher CPU voltages. While this board requires the most effort in getting the BIOS set up properly for overclocking or utilizing 4GB of memory, it does perform very well and is just shy of the ASUS board in overall performance. Considering the price/performance ratio, we would say this board offers a great value in the G33 market sector for those needing above average performance with budget features.

However, these boards don't exist in a vacuum -- there are many other uATX options out there. We really cannot recommend any of these boards for the user who needs a basic HTPC setup and does not want to spend more on the GPU than they spent on the board, processor, and potentially memory in some cases. In the Intel world, the AMD Radeon X1250 offers a significantly better feature set, as do the NVIDIA MCP73 based boards that we will see in our next article. These same video capabilities are also available in the AMD 690G and (to a certain extent) the NVIDIA 7050 boards for AMD. That sometimes is the issue with being a jack of all trades: you get left out in the cold when somebody needs a master tradesman for a specific job.