As mentioned, the P5E3 Deluxe board is designed for the general enthusiast with an emphasis on features designed for the home user, whether it is for gaming or home theater usage. ASUS provides two eSATA ports via the JMicron JMB363 chipset, IEEE-1394 support from Agere, excellent onboard audio support from the ADI 1988B, an 802.11n WiFi port, and dual Gigabit LAN capability. The board offers a very good mix of expansion slots, though utilizing a CrossFire setup will create the physical loss of a PCI-E x1 and PCI 2.2 slot. The third PCI-E x16 slot operates at x8 electrically and can be utilized for various PCI-E cards including AGEIA PhysX, RAID controllers, or a third video card. This slot will support a third ATI graphics card for "TriFire" operation once drivers are released with the proper support, according to our current information.

We will go into the BIOS settings in additional detail once we receive the retail kit and official launch BIOS. However, the following screenshots represent features that we know will be in the retail BIOS. 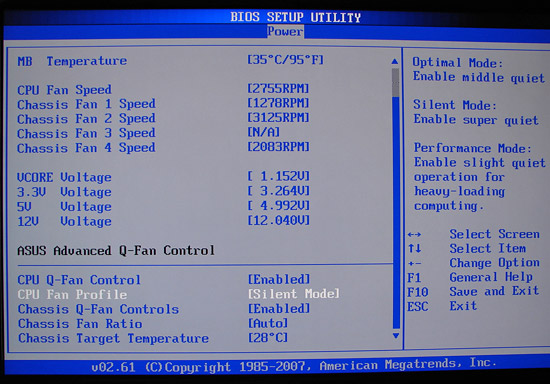 ASUS monitors the standard CPU fan speed and voltage readings. One item of note is that the BIOS monitors the CPU fan speed and four chassis headers but not the fifth header. Fan control is fairly limited when comparing it to abit's excellent uGuru setup with very simple options based on fan percentage speeds or base system temperatures. While the ability to individually control fan speeds is good, the speed options are too limited in our opinion for a board in the enthusiast category. 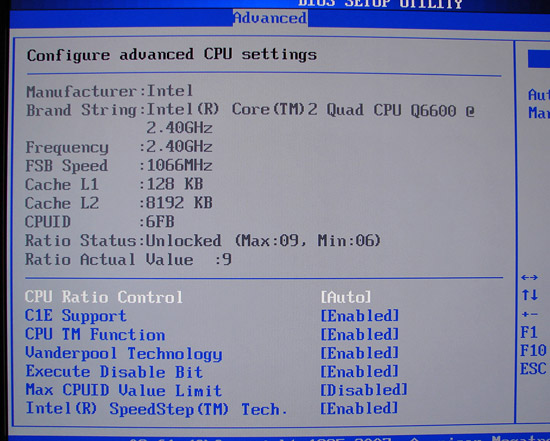 The advanced section of the BIOS contains the standard power saving options and an additional control for the CPU ratio. 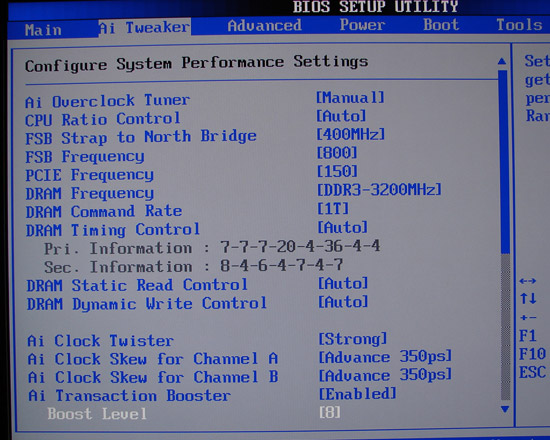 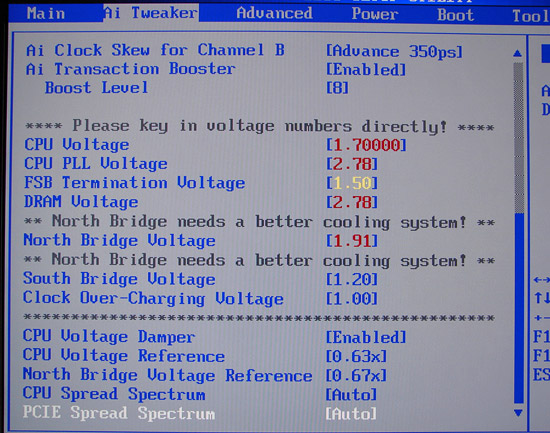 The heart of the BIOS is under the AI Tweaker section with a wide variety of options for tuning the board. Although not as extensive as the typical DFI enthusiast boards, the options are fairly extensive with the notable addition being the 400FSB Strap setting in addition to 200, 266, and 333. Although not shown, the DRAM timing control section offers 15 different memory settings and hopefully they will remain in the retail BIOS.

ASUS has added the Ai Clock Twister option which basically offers slightly tighter sub-timings when set to strong. We noticed a slight decrease in latencies when utilizing this particular setting, but no tangible real world results that would matter to most users. ASUS has also revamped the Ai Transaction Booster setting when compared to their P35 boards. The old Transaction Booster setting of 0 on the P35 board is now 1 on the X38 board with the remaining ratios offering the same offset. Ratios 5 through 8 are new to the board although we could not get the board to POST with a ratio higher than 3.

Our screenshots show the maximum value for each option. Any setting greater than 1.77V for the Northbridge resulted in a warning for better chipset cooling. Although previous engineering samples of the X38 ran warm to hot when overclocking, our current sample stayed around 74C with 1.91V after two hours of looping 3DMark06. The available voltage options should satisfy about 95% of the users; however, we feel like the available CPU voltages are lacking when compared to the other X38 boards we have in-house as well as some of the upper-end P35 boards. ASUS has also included the ability to save BIOS profiles, although it is currently limited to two profiles.