by Wesley Fink on September 17, 2007 6:00 AM EST
58 Comments | Add A Comment
58 Comments + Add A
Comment
A few years ago any discussion of which was better - water or air - would inevitably end in the conclusion that water was better than even the best air coolers. In fact, many would have considered it heresy to even raise the question. We are told from many directions today that water cooling is superior, and yet there are few direct comparisons of the performance of water and current air cooling.

There have been many advances in air cooling in the last few years - so much so that the best current air coolers bear almost no resemblance to yesterday's air coolers. The top air cooler of yesterday was a configuration with a small, whining, top-mounted fan with a heavy copper heatsink and no heatpipes. This is a far cry from today's best air coolers. Now the most successful of current air cooler designs feature heatpipe towers with quiet side-mounted 120mm fans blowing toward a rear exhaust.

The multiple liquid-filled heatpipes and the large, quiet, high-output fans in use today have taken air cooling to new performance levels. Our testing here at AnandTech supports the vastly superior performance of the heatpipe tower compared to the older air cooling designs. With these results in mind, it is time to revisit the question: is water cooling still the best performer?

Certainly the reasonably priced self-contained water coolers have provided mixed test results compared to the top air coolers. The small Xigmatek AIO provided good results for its size, but the larger Evercool Silver Knight was somewhat disappointing in performance. It was reasonably clear in test results though, that the self-contained units could compete in the notch below the top of the tested air coolers, but not the top air coolers of today. None of the self-contained water coolers really cooled better or could reach the same high overclocks we saw with the best air designs. This raised the question of how "real" water cooling systems would compare.

Water cooler designs have not been completely static while air cooler design has been evolving. Water cooling manufacturers have been working toward simpler designs that are less intimidating for the average computer enthusiast. This involves several different approaches. Some look to move all of the water cooling components inside the case while others are looking at new ways to move water cooling outside the case; we will be looking at both approaches today, the former with the Swiftech H2O120 Compact and the latter with the Corsair Nautilus 500. Whichever approach they have taken, the water cooler manufacturers claim combining complete top-line pumps, waterblocks, reservoirs and radiators has resulted in top-line water cooling results with a much easier installation than traditional water cooling. 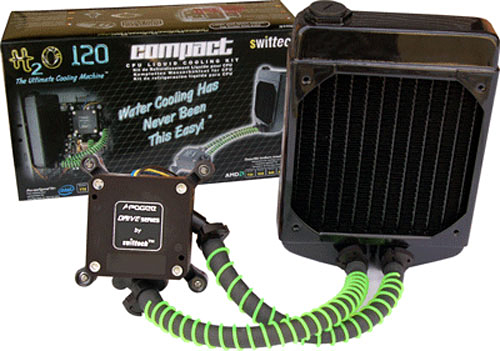 According to Swiftech this simplified water system still uses the top individual components in the combined components so performance is not compromised. The simpler H2O-120 Compact also claims much easier installation, with just 15 to 20 minutes required for a complete internal installation. All of this water cooling performance also comes at a cheaper price than is typically seen with a water cooling kit. The H2O Compact was just introduced and is selling for around $150, but Swiftech tells us they expect the street price for the H2O-120 Compact kit to settle in at around $129. 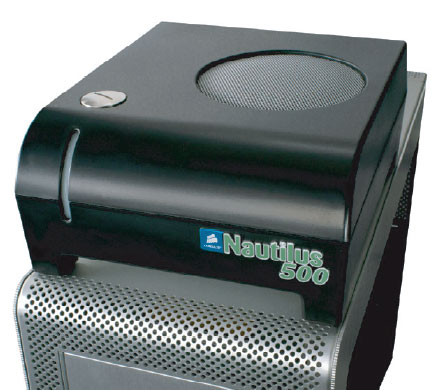 The Corsair Nautilus 500 uses a different approach to easier installation. Components remain similar to the more traditional water cooling parts, but everything except the CPU water block is integrated into an external cooling appliance. This also reduces water connections to two tubes for a much simpler and faster installation. Corsair claims the Nautilus 500 can be installed in 8 minutes, which is certainly as fast as most air cooling installs.

The Corsair Nautilus 500 also comes at a cheaper price than many other water cooling kits. Where most kits are in the $200 or higher price range, the Corsair sells for about $150 or even less. This places the Nautilus 500 in the same basic price group as the H2O-120 Compact.

Both Corsair and Swiftech claim they have not compromised in quality or performance with the simpler-to-install systems. Both say they combine top-line pumps, water blocks, reservoirs and radiators to insure top-line water cooling results with a much easier installation than traditional water cooling. In fact it appears both Corsair and Swiftech use similar components in their systems that are arranged in different configurations.

The big question then is performance. Do the Swiftech H2O-120 Compact and Corsair Nautilus 500 actually outperform the top air coolers? Are they quieter than today's best air coolers as advocates of water cooling claim? These are not frivolous questions since either water system costs two to three times the price of the top air coolers. Finally, are there other advantages to these water systems that make them a better choice even if performance is less than standout? Do the Compact H2O and/or the Nautilus 500 claim the title of best cooling system tested at AnandTech?