The Interface of WHS

Although we'll touch on specific points of the GUI of WHS as we come to the various functions of the OS, we'll still spend a bit of time with the WHS interface since it's one of the other critical components that separates WHS from other server products and makes it work. Because WHS needs to be usable by a subset of users that are only partially computer literate, several special considerations had to go into making an interface for the OS. Furthermore the entire thing needs to be able to run headless once a WHS server is set up.

Microsoft has opted to go with a single application to control all of the functionality of WHS, the simply-titled Windows Home Server Console. As we alluded to earlier, the console actually runs on the server, and via a specialized RDP client is controlled from the clients. For clients that install the full connector suite (used for enabling backups) the specialized client is installed, which initiates the console on a remote computer and then transparently uses RDP to display it on the client as a local application. Because this is done via RDP, other clients from other OSs connect to and control the server via normal RDP; in this case they'll get the entire desktop of the server. At this point Microsoft is seriously entertaining the idea of pushing WHS onto non-Windows households, the Mac platform especially since an official RDP client is available. 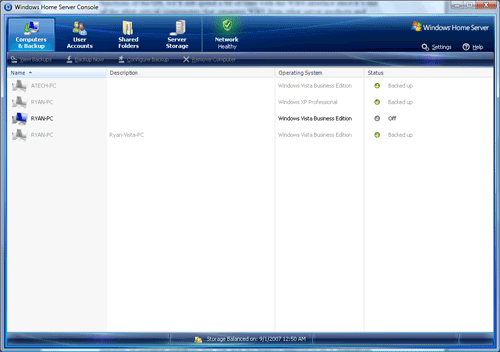 The console effectively breaks up administration into 6 tasks: backups, user accounts, shared folders, server storage/drive management, network status, and WHS settings. As far as all of these interfaces go, Microsoft isn't working with any new human-computer interaction memes, rather everything is scaled down to be as simple as possible without losing effectiveness. This means that there's little we can say that's remarkable about the interface; it looks like Windows and there's a lack of buttons to push or things to break.

We're not completely sold on the effectiveness of the interface, but torn as to why. We don't think Microsoft could have made the interface any simpler without taking out features, but that doesn't preclude making it better. The interface is effectively a listing of a bunch of things to do, with help menus available that explain what each and every last thing does. It gets the job done, but a certain degree of computer literacy is required to understand what's going on. We'd say MS has done better with simplifying complex interfaces with Vista MCE, which manages to break complex issues such as storing recordings into a simple manner very well.

To that extent organizations like Geek Squad will probably get a good amount of business out of setting WHS up; it's not by any means hard, but there will be a sizable minority of potential customers that will lack the literacy required to do it themselves. However once set up WHS is by all indications plenty capable of continuing on indefinitely on its own; even its automatic update function has been revised for headless operation so that it can install any and all updates without human intervention (which is not the case today with XP or Vista). This is the reason we're torn, since most WHS servers probably won't need administration for 99.9% of their lives. The interface, especially for backups and user accounts, is good enough that once the server is set up it should be possible for more or less anyone to handle what little administrative duties remain.

On the whole Microsoft could have done a better job on making the interface accessible for everyone, but it's good enough for now.