We had heard rumors of Intel introducing a faster, lower latency L2 cache in Wolfdale and it appears to be true:

Not only is Wolfdale's L2 cache larger, but it also happens to be slightly faster than its predecessor. Intel has shaved off a single clock cycle from Wolfdale's L2 access time; we're already off to a good start.

If you want a quick glance at what Wolfdale will offer, the chart below will give you just that. We've taken some of our normal CPU benchmarks and ran them on a 2.33GHz Conroe as well as our 2.33GHz Wolfdale, the chart below illustrates percent performance improvement of Wolfdale over Conroe at the same clock speed: 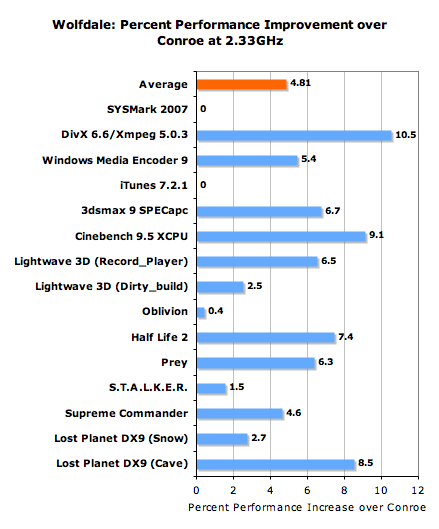 Let's point out the zeros first: SYSMark, iTunes and Oblivion all showed no performance increase from Conroe to Wolfdale. Not all applications will benefit dramatically from the improved cache or architectural improvements and these are examples of some.

The DivX 6.6 test shows a particularly impressive 10.5% increase in performance, especially when you keep in mind that we are running the same DivX test we always run and not an SSE4 optimized benchmark. If you'll remember back to our Intel-sanctioned Penryn preview, with SSE4 enabled Penryn's DivX performance skyrocketed. But this test here shows us that even without SSE4 optimizations, Wolfdale is a healthy 10% faster than Conroe. Windows Media Encoder 9 saw a 5.4% increase in performance, which is still tangible.

Wolfdale also seems to do quite well in 3D rendering apps, giving us 6.7% better performance in 3dsmax 9 and a similar boost in Lightwave. Cinebench performance improved even further at 9.1%.

Gaming performance is a bit of a mixed bag; we saw everything from Oblivion's 0.4% performance improvement to 8.5% under Lost Planet. Wolfdale is good for gaming, but the degree is very title dependent.

On average, Wolfdale ends up being just under 5% faster clock-for-clock than Conroe. Definitely not an earth shattering improvement, but an improvement nonetheless. Focusing in on specific benchmarks, Wolfdale can look even more impressive. Without taking SSE4 performance into account as we don't know how widespread SSE4 applications will be upon its arrival, Wolfdale will simply make competing more difficult for AMD's Phenom, but not impossible.