Our application benchmarks are designed to show application performance results with times being reported in seconds, with lower scores being better. While these tests will show differences between the drives it is important to understand we are no longer measuring the synthetic performance of the hard drive but how well our test platforms perform with each individual drive. The performance of a drive is an integral part of the computer platform but other factors such as memory, CPU, core logic, and even driver choice can play a major role in determining how well the drive performs in any given task.

We utilize the WorldBench 6.0 test script that applies an extensive series of filters to the test image. CPU, memory, and chipset speed factor heavily in this particular test but we have found this test to be good for hard drive access performance as Photoshop relies heavily on its "paging file" to improve performance. 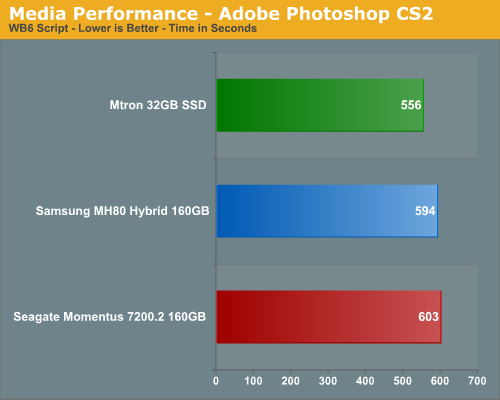 We have seen performance gaps between desktop drives, especially in RAID setups, with this particular test and there was no difference here as the MTRON SSD is about 8% faster than the other drives.

The Battlefield 2 test measures the time it takes to load the Daqing Oilfields level. Our application timer begins when the start single player icon is initiated and ends when the join game icon is visible. 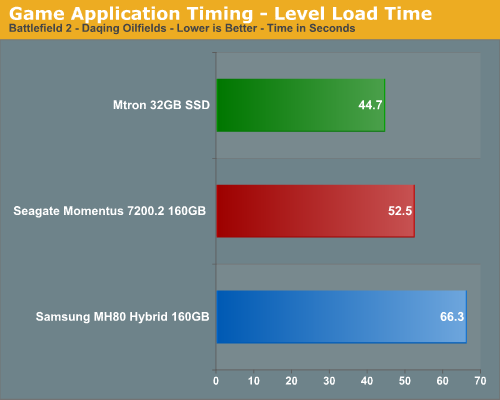 This is one of the more demanding game level load times we test currently and the MTRON drive is around 33% faster than the Samsung drive and 15% faster than the Seagate drive. We could definitely tell a difference between the drives in this test over the course of two gaming sessions. The MTRON SSD product loaded the levels in a smoother manner than our Seagate drive although it was difficult to determine any differences with the Samsung drive except when first starting the game.

Our encoding test is quite easy - we fire up Nero Recode 2, select our Office Space copy on the hard drive, and perform a shrink operation to allow the entire movie along with extras to fit on a single 4.5GB DVD disc. We leave all options on their defaults except we turn off the advanced analysis option. The scores reported include the full encoding process and are represented in seconds, with lower numbers indicating better performance. 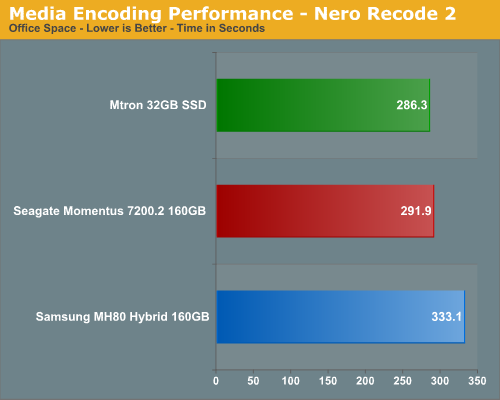 We expected the NAND flash memory on the Samsung drive and Vista's ReadyDrive feature to compensate for its 5400RPM spindle speed in this test that features large sequential block sizes. The Samsung drive had the highest variation of encoding frames per second. It was an obvious buffer overflow pattern as the frames per second would start at 1100+ and as the buffer filled up the fps would sometimes drop to under 400 and then steadily increase back to the 1100 level before repeating the pattern. The other two drives held a steady fps average throughout this test with the fps variation never being more than 5%. It appears to us there is still some firmware management tuning between the two buffers that need to occur on the Samsung drive for large sequential data block sizes.

Our WinRAR test measures the time it takes to compress our test folder that contains 444 files, 10 folders, and 602MB of data. While the benchmark is CPU intensive for the compression tests it still requires a fast storage system to keep pace with the CPU. A drive that offers excellent write performance can make a slight difference in this benchmark. 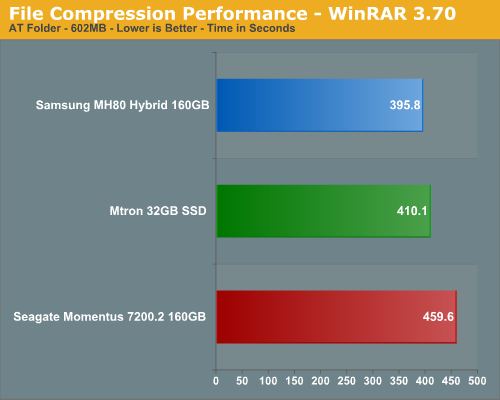 This test relies on the CPU and also the burst rates of the storage system. The Samsung drive obviously thrives on small sequential data block writes as its cache buffers more than make up for the lower spindle and higher access times. Our Samsung unit is 4% quicker than the MTRON unit and 145 better than the Seagate drive.

Our file copy test measures the time it takes to transfer our test folder that contains 29 files, 1 folder, and has 7.55GB of data from our source drive to the target test drive. This benchmark is disk write intensive and requires a fast storage system. 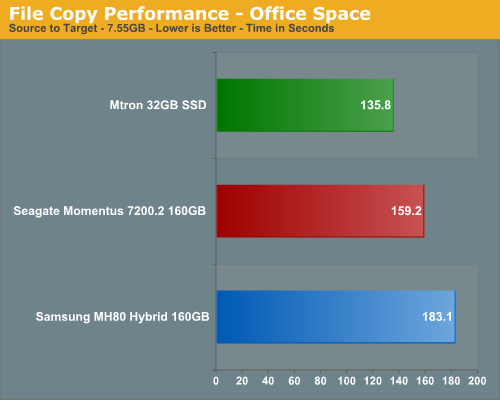 We finish our application tests with a benchmark that favors the MTRON's higher write speeds. As in Nero Recode, where the largest differences in scores were generated with large sequential data block writes, we see the Samsung drive being up to 27% slower than the MTRON drive and 14% when compared to the Seagate unit. However, we find it hard to fault the Samsung drive considering most portable users will be using applications that usually generate small sequential or out-of order data blocks. These type of read or write patterns is something the Samsung drive excels at in initial testing.