PC Power & Cooling has been in the US-market for a long time, but for people in Europe it is a new name. Since the recent acquisition of PCP&C by OCZ Technology Group their channels have been extended into the European market, et voila they are available throughout Europe a week later. Since OCZ will keep the name PC Power & Cooling (PCP&C) we will continue to use their current name. OCZ will make no changes in the power supply lineup of PCP&C and therefore the power supplies from today are the same as those from half a year ago.

Today we will have a look at the Silencer 750 Quad in the Crossfire-Edition which comes in a bright red color. It is advertised as the godfather of silence and comes rated at 750W, which is more than most PCs need. Because a 750w power supply will become very hot if fully loaded, we have to express doubt that it is possible to keep it cool while remaining "silent" - especially if there is only a single 80mm fan installed like in this PSU. 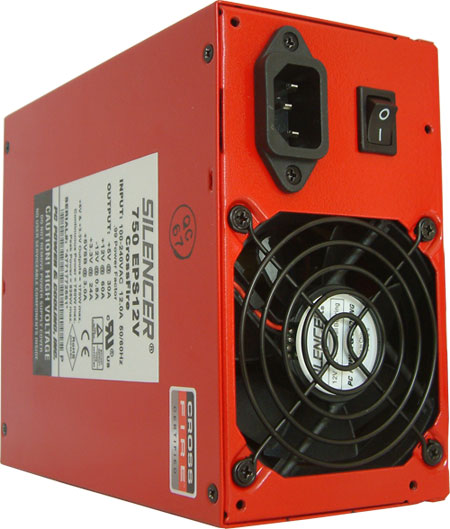 The voltage input can handle everything from 100 to 240V, so the power supply can work in any region of the world. The label tells us that this unit comes with a single 12V rail. PCP&C was one of the first companies to introduce this new method, while many others continue with designs that include four separate 12V rails rated at only 20 amps each. The 750 Quad delivers up to 60 amps on the 12V rail which then supports all of the various system components.

A single 12V rail doesn't come without issues though. At first you might think you will never encounter problems with OCP (Over Current Protection) kicking in if you load one rail too high. This could happen if you connect one of the latest graphics cards to a 12V rail that only delivers 15 amps for example. The result is often a blue screen and/or the PC shutting down. This problem is solved with a single 12V rail that will have enough juice for everything - provided you don't need more than 60 amps, of course. 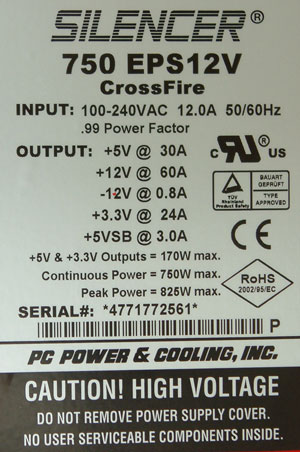 The problem with this alignment is basically the danger it brings. The latest Power Supply Design Guide states that no 12V rail should exceed more than 20 amps (240VA). If certain types of damage occur to the power supply or cables, such a high amperage could be dangerous to the end users. Electricity will always come with some risks, though, and as another manufacturer informed us the likelihood of a PSU being damaged in such a way that a 60 amp rail becomes a risk is very slim. Still, it is technically against the PSDG specifications and could be dangerous in certain instances.