Bandwidth enables new usage models, it's what we saw on the desktop and it's what we're seeing in the mobile phone market as well.  Streaming video to mobile phones is a definite bandwidth consumer, and something that's truly enabled by 3G wireless technologies - but at what cost to battery life?

On the Blackjack we used the YouTube Mobile site (m.youtube.com) with a hack to enable playback on Windows Mobile 5.  We played back the same video over and over again until the battery died.  Unfortunately the longest video we could find on YouTube Mobile that was stressful enough for our test measured around 5.5 minutes, meaning that by the end of the 3+ hour process we were ready to die.

Things were a bit easier on the iPhone as its YouTube implementation has a larger selection of videos, including our test video which was over 40 minutes long, thus requiring fewer clicks on our part to keep the video looping. 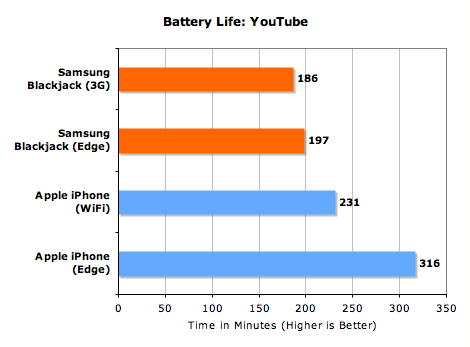 Our YouTube test is a little misleading when it comes to the iPhone because there's more than one variable being changed here.  When switching between Wi-Fi and EDGE on the iPhone, the YouTube client automatically requests a different quality video depending on what wireless connection you're using.  The stream over Wi-Fi looks absolutely beautiful, while over EDGE you get a much lower bitrate stream that's more reminiscent of what YouTube looks like on the web.  The problem with this is that we're unable to measure the impact of Wi-Fi vs. EDGE alone, as the flipped results show (EDGE outlasting Wi-Fi).

Looking at the Blackjack results helps us make sense of the iPhone's behavior.  Streaming video from YouTube is predominantly CPU bound, so much that the primary determinant of battery life is the CPU itself, not driving the wireless antennas.  The end result is that while 3G draws more power than EDGE, the difference is around 6% because the CPU is eating the vast majority of the power budget and its role is identical regardless of whether the phone is running in 3G or EDGE mode.

If we assume that the same CPU bound limitation exists on the iPhone, the fact that while decoding lower quality video the iPhone would last longer makes sense.  Lower quality video means a much lighter load on the iPhone's CPU, thus resulting in longer overall battery life.  In this case, the significant reduction in quality results in an equally significant increase in battery life (37% or close to an extra 1.5 hours).