Our acoustic test utilizes our standard test bed components but we implement Intel's power saving technology and turn off the case fans to isolate as much case noise as possible during testing. Our Corsair power supply is nearly silent in these tests and our MSI 8800GTX video card is water cooled by an external unit to provide a further decrease in our case's ambient noise levels. Our drives are attached to the drive cage with rubber bushings to assist in isolating the noise of the drive and avoid the resulting harmonic changes due to the case design.

Our acoustic tests are designed to measure the decibel levels while the system is at idle and also under load while running the General Hard Disk Drive Usage benchmark within PCMark 2005. We found through trial and error that this particular benchmark produces controlled readings across a wide range of applications within the benchmark. This particular benchmark utilizes 60% reads and 40% writes within the trace playback file.

The measurements are taken at a distance of 5mm from the rear and front of the drive being tested in order to minimize surrounding environmental noise. We have noticed that unless we run a completely silent system in a quiet room that measurements taken from 1m are generally not meaningful due to ambient noise levels. There are exceptions like the Raptor series of drives but overall most modern desktop drives are quieter now than the other components in the system while under load.

The reported measurements are based on an A-weighted decibel score that measures frequencies similar to the way the human ear responds to sound. We take a total of three measurements for each test. We then subtract the high and low scores and arrive at our findings by reporting the remaining score. 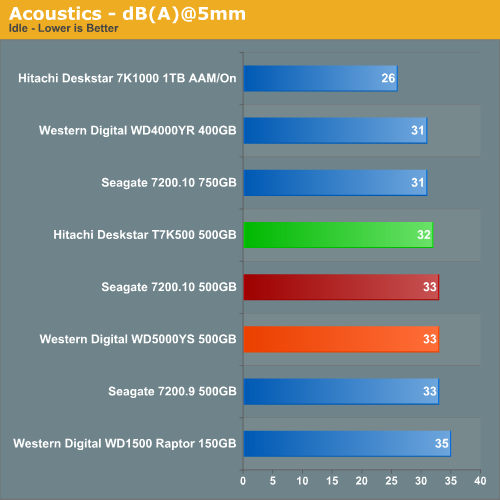 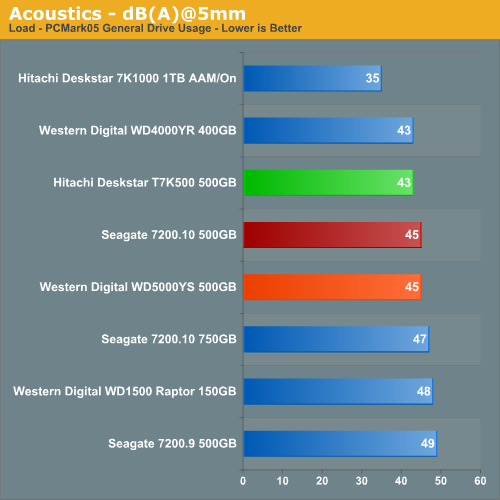 Our Seagate 7200.10 is fairly quiet when compared to the other 500GB drives at idle. We basically did not have any issues with the drive's noise levels at idle or during light operations. However, there was a significant audible noise during heavy read seeks and the Nero Recode tests. This particular tone was noticeable with the case closed and up to two feet away. Our base dB(A) level in the room at the time of testing was 25 dB(A).

Our thermal tests utilize sensor readings via the S.M.A.R.T. (Self-Monitoring, Analysis and Reporting Technology) capability of the drives and are reported by utilizing the Active SMART 2.42 utility. We also utilize thermal sensors and infrared measurement devices to verify our utility results. We test our drives in an enclosed case environment without the fans operational to simulate temperatures that could conceivably be reached in a near silent SFF or HTPC case design. We typically find the reported numbers drop anywhere from 18% to 25% on average with the case fans operational. Our base temperature level in the room at the time of testing was 25C. 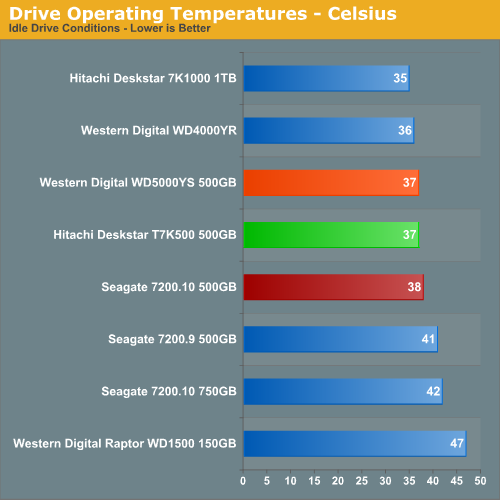 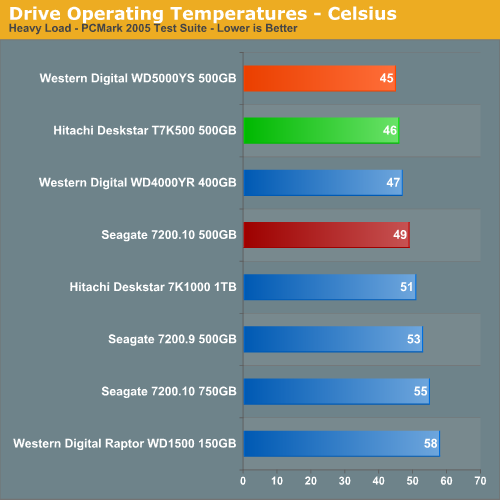 There are no real surprises at idle as the 500GB drives all currently use the same number of heads and platters. However, under load conditions we see the Seagate PMR design running up to 4C hotter than the other two 500GB drives. This has been a pattern with the Seagate PMR drives and something we will take note of in testing Western Digital's new AAKS PMR based drives. We saw the load temperatures drop from 49C to 43C under load conditions with the front fans operational. We highly recommend a fan be installed near the drive during normal operation.