Tell it To Me Straight Anand: Is it Any faster?

The beauty of these FSB launches at equivalent clock speeds is that we show you a single chart that summarizes the performance impact of the faster FSB across our entire bench suite. At one single glance you can figure out whether or not there's anything worth getting excited about: 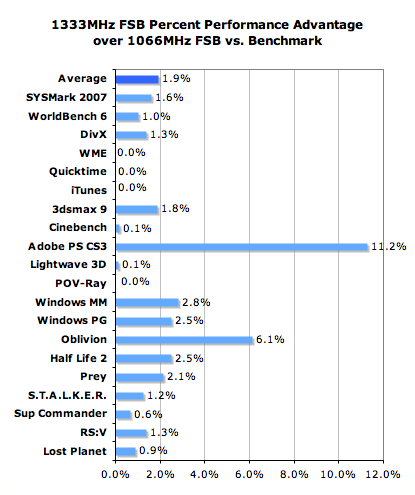 Overall, the 1333MHz FSB doesn't do much for dual core processors. Over the 20 benchmarks we sampled for this chart, the 1333MHz FSB gave us an average improvement of 1.9% over the 1066MHz FSB. There are two unique outliers in the chart: Oblivion with a 6.1% improvement and Photoshop CS3 with an 11.2% increase in performance. Both of these benchmarks are hand timed so the variance between runs is greater than normal, and we suspect that may be the reason for some of the larger than normal impact of the faster FSB but after multiple subsequent runs we were left with the same results.

Keep in mind the fundamental rules of FSB performance: clock speed, number of cores, memory bandwidth and microprocessor architecture all play important roles in the impact of a faster FSB. The clock speeds Intel is launching its 1333MHz FSB processors are basically the same ones that Intel first introduced the Core 2 at; we weren't FSB bottlenecked back then, thus there's no reason to expect a huge increase in performance by bumping the FSB today. Quad-core CPUs may see a performance boost, but we'll have to wait until later to find out exactly what that improvement would be; we have a feeling that the overall performance impact will be similarly unimpressive given the relatively limited number of desktop applications that can take full advantage of four cores.

As Intel ramps up clock speed and continues its transition to quad-core the 1333MHz FSB will be more important, but today it's by no means a necessary feature. There's a bigger performance impact from having more L2 cache (e.g. 4MB vs. 2MB) than from the 1333MHz FSB, which is great news for present day Core 2 owners.

Under load, the faster FSB also doesn't increase power consumption much at all:

An increase of 2W isn't much for a desktop platform, although Intel could arguably implement a variable speed FSB from its latest Centrino platform if power consumption ever becomes an issue.