While architecturally Griffin is no different than today's Athlon X2s, it will draw noticeably less power in normal use.  AMD is the first to announce the next step in multi-core power management: independent voltages and frequencies for each core.  While Phenom splits the North Bridge and CPU cores into two separate voltage planes, Griffin goes one step further and puts each individual CPU core onto an independent voltage plane.  The benefit is that not only can each core run at its own frequency, but it can also run at lower voltages giving you significant reductions in power consumption.

Dynamic power of a CPU can be determined by the following equation:

Simply reducing the frequency of a processor (F) will result in a linear reduction in power consumption, but as you can see voltage (V) has an exponential relationship to power.  Reducing both is ideal, and that's exactly what Griffin does. 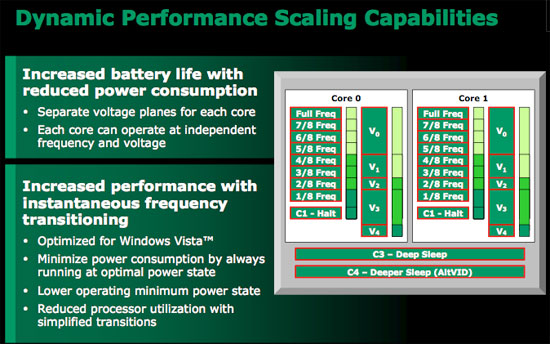 Each core can run at one of 8 frequency steps and five voltage levels, independently of one another.  Deep and deeper sleep states are supported, however AMD is currently looking into the possibility of implementing a C6 sleep state similar to what Intel announced for mobile Penryn.  AMD wouldn't commit to whether or not we'd see a C6 state in Griffin, leading us to believe that it simply wasn't implemented at the time of Intel's Penryn announcements and there may not be enough time to add it in before launch.