Supreme Commander is one of the better RTS games to be released in recent memory although we are still huge fans of Command and Conquer 3 along with Company of Heroes. We chose Supreme Commander as it is both a GPU and CPU hog when it comes to systems resources. We utilize the built-in performance test to benchmark the game. We set all of the settings to high and only change the resolutions between benchmark runs. This benchmark provides a cornucopia of results but for our tests we will report the average frame rates during the benchmark. We generally find this game to be playable with frame rates at or above 35fps. 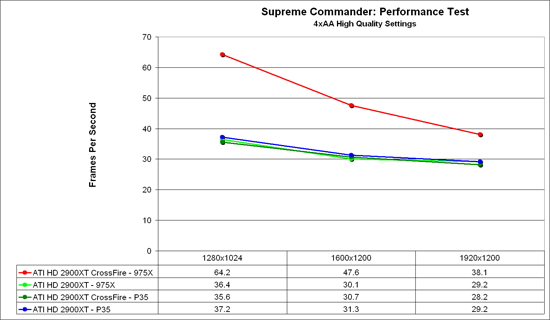 We witnessed stutters and graphic anomalies during CrossFire testing with the P35 setup along with the fact that the scores were generally lower than either of our single card setups. We attribute this problem to driver optimizations and/or BIOS issues with the R600 and P35 as our X1950XTX testing did not reveal the same pattern with this setup. This is yet another game where CrossFire support seems to be broken, at least with the P35 platform and the R600.

Company of Heroes was released last year and is still proving to be a very addictive RTS game around the office. The game is extremely GPU intensive and also requires a hefty CPU at times. If this is beginning to sound a lot like Oblivion, well CoH is very similar to Oblivion in system requirements. The visuals and audio experience within the game will at times have you believing the game is based more on a First Person Shooter than a traditional Real Time Strategy game. We set all options to High and turn on all additional video options.

The game contains a built-in performance test that utilizes the game engine to generate several different action scenes along with a coffee argument as a sideline distraction before the war starts. We found the performance test gives a good indication of how well your system will perform throughout the game on average. We have found some of the in-game action sequences to be more demanding than the performance test and are working on game play benchmark that is repeatable. We generally found the game to be enjoyable with an average frame rate above 35fps. 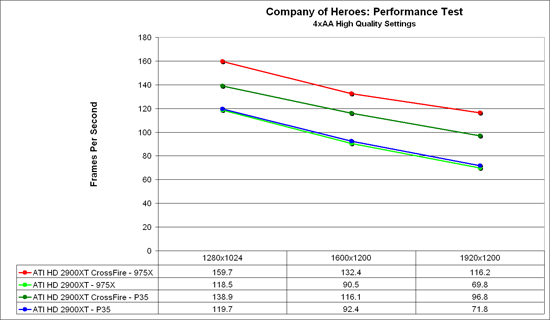 We see the P35 CrossFire solution stinking up the office in this benchmark although the single GPU scores favor it. The P35 setup is running about 15% to 20% behind the 975X platform. We did not notice any stuttering during the performance test or actual game play but we did notice banding on the P35 setup that was not present in the same scenes on the 975X setup leading us to believe there is a definite driver issue. However, the spread between the 975X and P35 in backup testing with the X1950XTX CrossFire setup still showed a 7% to 9% difference in performance under both Vista and XP. This indicates the x16/x4 link is probably saturated by this game and leads to a noticeable performance difference. We will see how well the next set of drivers address these problems.

Prey offers some superb action sequences, unique weapons and characters, and is a visually stunning game at times. It still requires a very good GPU to run it with all of the eye candy turned on. We set all graphic settings to their maximum except for AA/AF and utilize a custom timedemo that takes place during one of the more action oriented sequences. We generally found the game to be enjoyable with an average frame rate above 35fps. 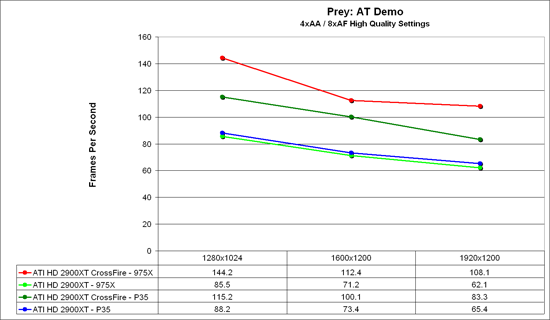 Once again the P35 CrossFire solution just cannot compete with the 975X solution. Although the frame rates are still very good the P35 setup is about 20% to 30% behind the 975X platform. Game play and visuals were excellent throughout testing but we did notice a few slowdowns during level changes that were not present on the 975X platform. The spread between the 975X and P35 in backup testing with the X1950XTX CrossFire setup still showed an 11% difference in performance under both Vista. This indicates the x16/x4 link is again saturated to some degree although driver optimizations should improve performance notably.