The 3DMark series of benchmarks by Futuremark are among the most widely used tools for benchmark reporting and comparisons. Although the benchmarks are very useful for providing apples-to-apples comparisons across a broad array of GPU and CPU configurations, they are not a substitute for actual application and gaming benchmarks. In this sense we consider the 3DMark benchmarks to be purely synthetic in nature but still valuable for providing consistent measurements of performance. 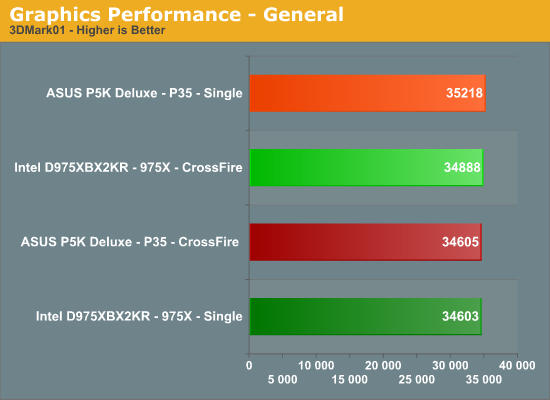 Well, the results of this test are confusing on the surface although driver maturity and memory sensitivity across the DMI interface has a great deal to do with the P35 results. The P35 chipset scores about 2% better in single card operation than in CrossFire mode and also leads the 975X CrossFire setup. We found in testing that the P35 CrossFire scores in each scene were slightly higher until the Nature test where the single card scored about 12% better. The 975X CrossFire setup just barely ekes by its single card performance results. This benchmark is currently a better indicator for CPU, chipset, and memory performance. In this regard, we can see that the P35 single card performance leads the 975X slightly in platform performance as our game benchmark testing will indicate shortly. The fact is, in unbuffered memory testing the P35 was generally about 5% faster than the 975X across the board with CPU throughput testing being higher with a quad core processor. 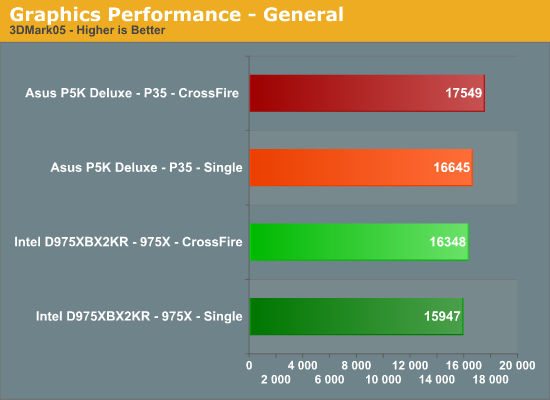 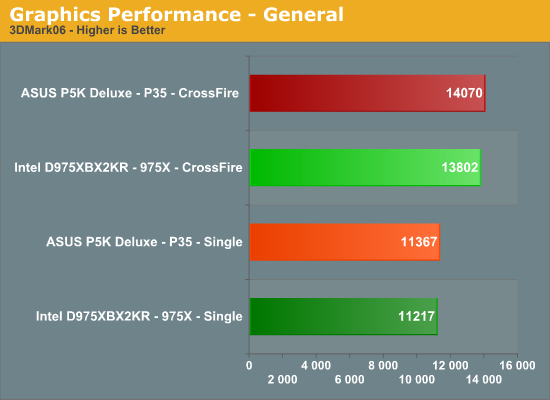 The DirectX 8 centric tests in 3DMark05 benefited greatly from the improved chipset throughput performance of the P35 chipset at stock settings with our quad core processor. The P35 CrossFire results are up to 7% faster than the 975X results with the single card P35 setup once again finishing ahead of the 975X CrossFire setup. Although we have found the P35 chipset to be a fierce competitor to the 975X in initial testing we think some additional BIOS and driver tuning would allow the 975X performance to improve by a few percent in these tests.

In our more strenuous graphics test utilizing 3DMark06 we find the P35 results once again leads the 975X chipset but the margin of difference is a negligible 1~2%. We decided to see why the results were so close in this particular test. We looked over the results and found in the SM2.0 tests the P35 solution was about 2% behind the 975X scores, the P35 CPU score was slightly better, and the HDR/SM3.0 tests showed a 4% advantage for the P35. Since the HDR/SM3.0 tests heavily stress both the CPU and graphics bus we figured the x4 PCI Express lane limitation would cause a bottleneck in this test.

Our initial assumptions turned out to be incorrect. After working with ASUS we discovered in their internal testing they noticed the same issue, and they decided to see what would happen on the 975X if the MCH was programmed at x16/x4 operation between the two GPU slots instead of x8/x8. Their test results revealed a surprise as the difference in throughout in all areas of testing was less than 1%. The issue lies in the limited bandwidth and speed of the Direct Media Interface between the P35 MCH and ICH9R. The time required to simultaneously move the data between the two chipsets imposes a significant overhead and bandwidth issue in memory sensitive applications, hence our issues in the memory sensitive 3DMark01 benchmark. Of course, 3DMark performance doesn't necessarily have anything to do with actual game performance anyway, so these results are only mildly interesting.

While ASUS has optimized this link and will continue to do so, it appears we are now near the maximum efficiency of this interface. This simply means that as games become increasingly complex and data bandwidth increases then the differences between the P35 and 975X in CrossFire operation will widen. Let's see how this potential issue and driver maturity affects our initial gaming benchmarks. We would like to stress once again that synthetic benchmark results do not necessarily correlate into real application results.