AMD finished things off with a brief update on its manufacturing. By the middle of this year AMD's Fab 36 will be completely transitioned over to 65nm, which is just in time for Barcelona to ramp up production. 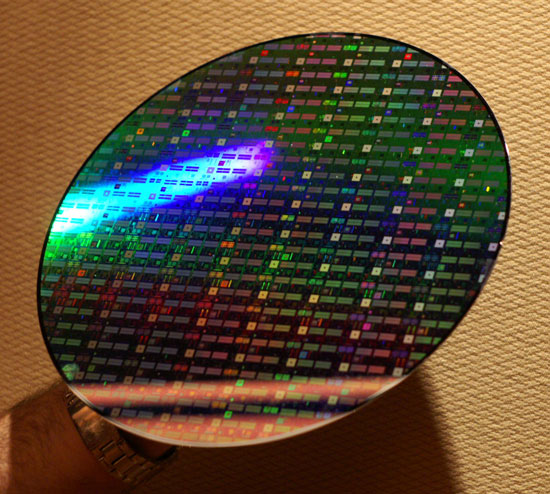 AMD showed off the same 45nm SRAM test vehicle we saw over a year ago in Dresden, which is a bit bothersome. We expected to see more than what we had already seen, but it could be that AMD continues to be a bit more guarded than we'd like; either that or functional 45nm CPU silicon just isn't yielding yet.

Needless to say, there's more to come and this is just the beginning. The fact that we can say this about AMD is an absolute shock to us, and possibly to you as well. For the longest time it seemed like the only CPU articles we'd write were either disappointing AMD product launches or exciting new Intel announcements. AMD is changing, arguably later than we'd like, but at least it's happening.

For a while we had lost confidence in AMD, like many of you had as well, and although AMD's position in the market hasn't changed we are more confident now that it can actually bounce back from this. Intel seemed to have the perfect roadmap with Conroe, Penryn and Nehalem all lined up back to back, and we saw little room for AMD to compete. Now, coming away from these meetings, we do believe that AMD may have a fighting chance. Over the coming months you'll begin to see why; it won't be an easy battle, but it will be one that will be fought with more than just price. 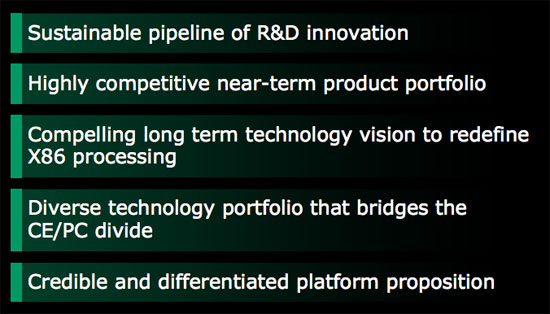 AMD's Fusion strategy looks to be an even stronger part of its future plans, if Phil Hester's prediction of a heterogeneous processing era comes true. While Intel has managed to deliver a much stronger CPU roadmap, we don't have much of an understanding of its answer to Fusion in the long term. AMD has very much been a leader in areas such as the move to 64-bit, an on-die memory controller, and now we may see the same leadership role with the move to integrate the CPU and GPU. The integrated CPU/GPU, taken to the exploitation stage as it was called by AMD, has the potential to really change the CPU as we know it. We do know that Intel has a response, but we're not as clear as to exactly what it is.

That being said, there's a lot that AMD has to do in the near term to ever get us to the point where the ATI acquisition could pay off. Barcelona is still at least a quarter away, we have no idea how it will actually perform, and AMD isn't giving us any indication. Despite a relatively weak introduction of Intel's latest Centrino platform, AMD still doesn't have a good competitor; while Fusion will give it a unique selling point into the mobile market, the first Fusion core is still well over a year away. The same worries we've had about AMD are still there; while we now know that AMD has some truly wonderful things planned for its future, we worry how great of a toll the interim will take on the company.

It is often said that what doesn't kill you, makes you stronger; despite losing $611 million dollars last quarter, and not winning a single performance benchmark since Intel launched its Core 2 processors, AMD is not dead. Market share is diminished, morale is low, but it may just be possible for AMD to come back from this stronger than ever. We're not exactly sure how AMD has lasted through all of this, but if it can pull through, we may once again have two very competitive manufacturers in the CPU industry.