Last month we took a look at NVIDIA's new midrange graphics offerings, the GeForce 8500/8600 cards. With 8800 series cards still costing well over $200, many users were hopeful that the new midrange products would hearken back to the days of the GeForce 6600 GT. The new cards offer decent performance and they definitely have some interesting new features, but in terms of providing a performance leap over the previous generation midrange hardware they seem to fall a bit short. That may change once we begin to see some DirectX 10 games on the market, but the reception so far has been generally ambivalent.

The GeForce 8M Series more or less follows in the footsteps of the desktop G84/G86 products. Here's a quick look at the specifications of the latest mobile NVIDIA hardware.


Similar to previous mobile graphics solutions, the feature set is nearly identical to the desktop offerings but with slightly different clock speeds. Power requirements are a far larger consideration, so for now we don't have any equivalent of the desktop GeForce 8600 GTS, and the 8600M GT has a core clock speed that's quite a bit lower than the desktop 8600 GT. Still, the new chips should provide more performance than previous generation mobile hardware, and there are other benefits. 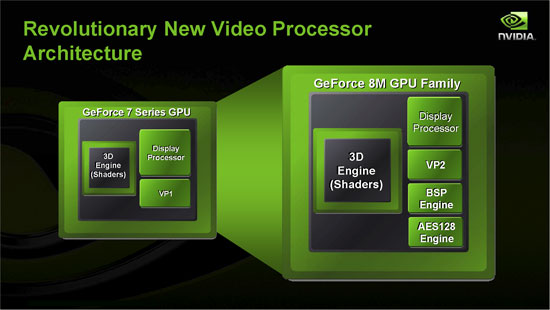 Besides the addition of DirectX 10 support, NVIDIA has overhauled their video processing engine. We discussed this in the desktop G84 article, but the short story is that H.264 decoding is now handled completely by the GeForce 8M processors. We actually think the feature is quite a bit more important in the notebook market, simply because we feel more people are likely to use portable computers to watch movies than regular desktop computers. Our reasoning is simple.

Most houses have a set-top DVD player that comes with a remote and probably costs less than $100, and adoption rates of Blu-ray and HD-DVD in the computer market have been relatively slow. The most likely owners of next-generation HD formats are the people that went out and bought PlayStation 3 consoles. On the other hand, anyone that owns a notebook computer and travels on a regular basis has probably watched a DVD at some point or another. Blu-ray and HD-DVD adoption is still in its infancy on laptops, but that will certainly change with time and the high system requirements for decoding such content can easily overload the processors on even the fastest notebooks. With NVIDIA's new VP2 hardware pretty much any new laptop will be able to handle playback of the latest high-definition H.264 video content. 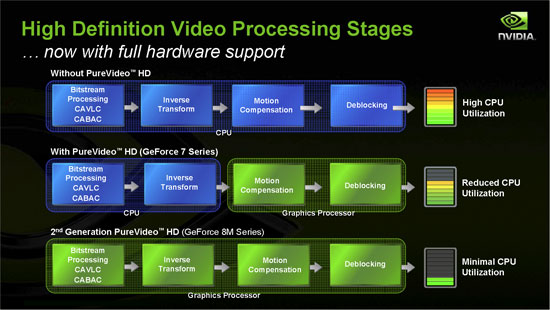 The decoding of CABAC and CAVLC bitstreams (the two types of entropy encoding supported by H.264) greatly reduces the CPU requirements for decoding Blu-ray and HD-DVD content. Not all content uses H.264, however, and the CPU is still required for handling certain aspects of video playback like AACS decryption. Still, anyone that hopes to watch next-generation video content on a laptop will almost certainly need something like one of the new NVIDIA mobile GPUs for the time being. 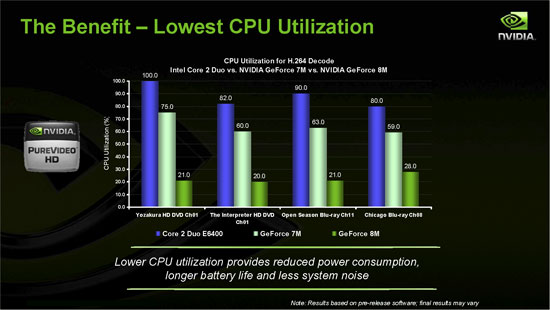 NVIDIA provided the above information on expected CPU utilization during H.264 decoding. Their results are similar to what we measured, though a bit lower in CPU use. You can read more about the performance NVIDIA's VP2 offers in our latest PureVideo HD article. 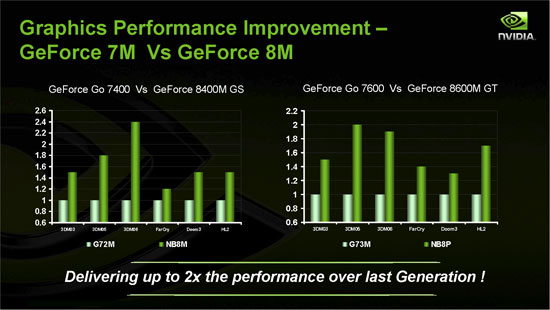 While we are unable to present any concrete benchmarks at this time, NVIDIA is claiming up to a twofold increase in 3D performance within the same power profile relative to their last generation hardware. Twice as much performance would definitely be welcome, especially if the price doesn't change much, but the charts in NVIDIA's presentation show 3DMark05 and 06 as delivering the highest performance gains over GeForce Go 7400 and 7600 hardware. We're hopeful that we will see large gains in other games like Oblivion and some of the latest DirectX 9 titles, but until we can investigate the situation more we would take any claims of twofold performance gains with a grain of salt.

Noticeably absent in our discussion so far is any mention of a new high-end mobile graphics chip. It appears that for the time being NVIDIA's GeForce Go 7950 GTX will remain their fastest mobile GPU. (Or if you really want to go nuts, you can get a notebook with GeForce Go 7950 GTX SLI.) NVIDIA hasn't given us any official word, but they're certainly not standing still and we would expect to see some higher performance DirectX 10 mobile solution in the future. Whether that will be in a couple months or a half year or more from now is currently anyone's guess, but the GeForce Go 7950 GTX is more than six months old as is the 8800 GTS/GTX, so we're hopeful that a more powerful GeForce 8 series part will make its way into notebooks in the not-too-distant future. We also hope that NVIDIA will manage to incorporate the VP2 hardware into whatever enthusiast solutions they might launch in the future. As we just finished explaining, we feel such hardware makes a lot more sense on notebooks than on desktop computers (though ideally we would see it in both locations).