NVIDIA has been pushing this game since the GeForce FX days, and now it is finally here. We have to use FRAPS to benchmark it even though a demo_play feature is included. Apparently the demo_record facility had to be removed at the last minute. 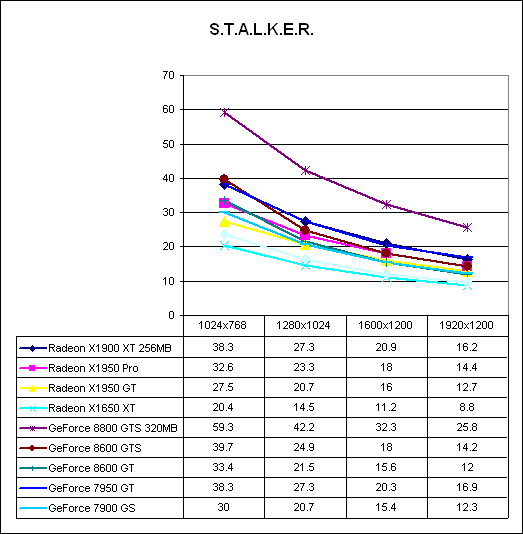 With the added texture address capability per shader and drastically reduced memory bandwidth compared to other 8 series hardware, the problems we are seeing could be related to memory pressure. This would also help to explain the poorer than expected performance in older games that rely more heavily on lots of textures rather than shader speed. We would need to do many more synthetic tests to really get to the bottom of this issue though.

At 1280x1024, a resolution many midrange gamers run, the new 8600 series just isn't able to handle S.T.A.L.K.E.R. with all the settings turned up except grass shadows. Some settings will need to be lowered a bit to achieve better performance at higher than 1024x768.