by Gary Key on April 23, 2007 12:00 PM EST
26 Comments | Add A Comment
26 Comments + Add A
Comment
Our application benchmarks are designed to show application performance results with times being reported in seconds, with lower scores being better. While these tests will show some differences between the drives it is important to understand we are no longer measuring the synthetic performance of the hard drive but how well our test platform performs with each individual drive or RAID 0 setup. The performance of a hard drive is an integral part of the computer platform but other factors such as memory, CPU, core logic, and even driver choice can play a major role in determining how well the hard drive performs in any given task.

In our World of WarCraft test we measure the time it takes to enter the world with the application timer starting at the character screen when the enter world icon is initiated until the character appears. 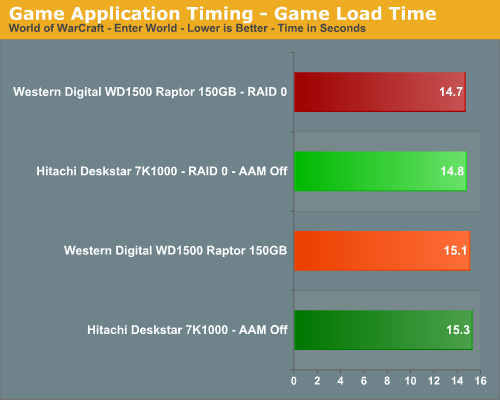 The results speak for themselves with the RAID 0 setups offering extremely minor performance improvements in actual game load testing. Our WoW testing occurred at several different points during the day in order to minimize the effects of any server issues. We consistently had a 2% to 3% range of improvement with the RAID 0 setup. However, we could not tell any differences during actual game play with a RAID 0 setup when compared to the singel drive setup.

Our Sims 2 - Open for Business test measures the time it takes to load the initial portion of the game. Our application timer starts when the game icon is initiated until the neighborhood menu appears. 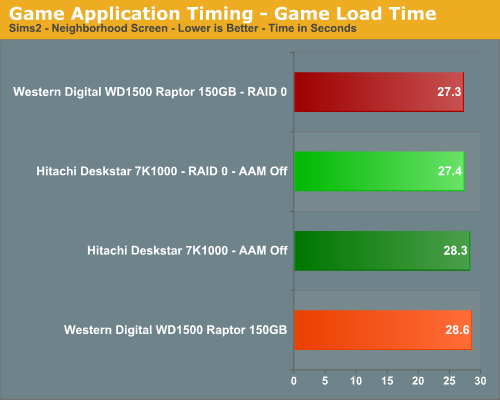 While we witnessed 38% to 50% improvements in our original IPEAK tests in this game but see less than a 3% difference in actual game times. Without a benchmark, these differences are impossible to witness during actual game play. Once again, we see the Raptor RAID 0 setup in front but the 7K1000 scores slightly better in single drive testing.

Our tests center on the actual loading of a playable level within our game selections.

The Battlefield 2 test measures the time it takes to load the Daqing Oilfields level. Our application timer begins when the start single player icon is initiated and ends when the join game icon is visible. 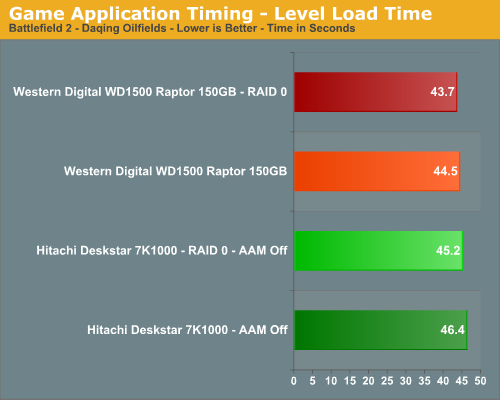 The Company of Heroes test measures the time it takes to load the first Omaha Beach Campaign level. Our application timer begins when the play mission button is initiated and ends when the press any key button is visible. 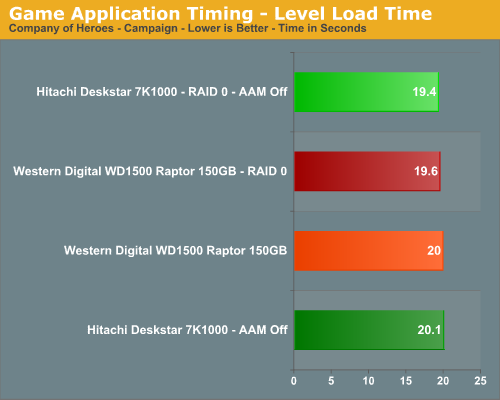 We see about 2% difference in this game on the initial load screen and throughout testing we could not tell the difference between RAID 0 and a single drive. Once again, a slight difference but nothing near the differences in our synthetic tests.

Our Supreme Commander test measures the time it takes to load the first Campaign level. Our application timer begins when the launch icon is initiated and ends when the commander is visible and stationary on the ground. 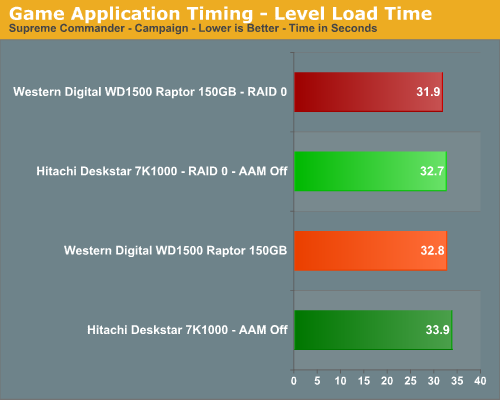 We see a 2%~3% difference between our RAID 0 and single drive configurations in this benchmark with no noticeable advantage being noticed during gameplay. Overall, our game testing revealed around a 2% advantage for the RAID 0 setup with the Raptor performing ever so slightly better than the Hitachi drive in most of the benchmarks.