At this year's IDF in Beijing, Intel announced its 2007 Ultra Mobile platform, codenamed McCaslin, to be used for MIDs and UMPCs. Just like Intel develops platforms for notebooks (e.g. Santa Rosa), it is doing the same for the ultra mobile market. The 2007 Ultra Mobile platform is composed of three parts: an Intel A100 or A110 processor, a 945GU Express GMCH, and an ICH7U ICH. The latter two chips you already know, but the processor is something we'd never heard of before. 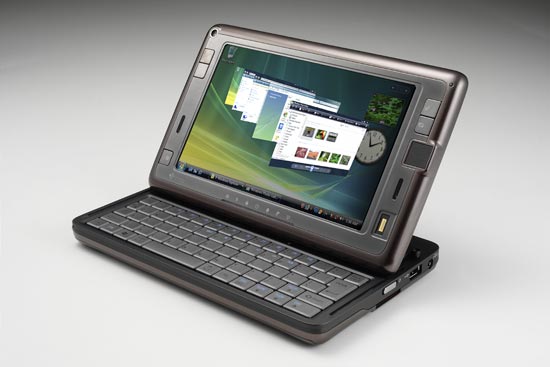 The HTC Shift based on Intel's 2007 Ultra Mobile platform

The A100 and A110 are Intel's first official ultra mobile processor offerings, and are basically rebadged and underclocked 90nm Pentium M cores. The A100 runs at 600MHz while the A110 runs at 800MHz, each with a 512KB L2 cache. At these low clock speeds, Intel lists the TDP of the two cores at 3W, fairly low compared to most notebook processors but still far away from the < 0.5W that Intel targeted back in 2005.

Never fear, as Intel went on to describe its 2008 Ultra Mobile platform, codenamed Menlow. In the first half of 2008 Intel will introduce a new low power micro-architecture with its Silverthorne processor. Silverthorne will be built on the same 45nm Hi-k process that Penryn will use at the end of this year. Intel didn't say anything more about Silverthorne other than that it would use a new chipset codenamed Poulsbo. According to Intel, both Silverthorne and Poulsbo were designed from the ground up to be used in UMPC and MID platforms. We believe that Silverthorne is Intel's 0.5W part, and according to Justin Rattner it will require 1/7 the total space of current mobile platforms to implement which should enable better sized UMPCs. Of course, Silverthorne will still be based on IA although it will most likely be 32-bit only given power and die size constraints.

Today's announcements were predominantly mobile focused and the fruition of what Intel is talking about today won't be seen for years to come. We are glad to see that Intel is focusing on delivering an even lower powered, IA-based micro-architecture to target handheld devices. While the A100/A110 processors won't be the CPUs that will solve all UMPC problems, Silverthorne in 2008 is a step in the right direction and if Intel can really bring power down to sub 0.5W levels by the end of the decade we should be in good shape.

If Intel can deliver a power optimized, reasonably fast, reasonably small form factor processor and platform for handheld computing in the coming years we have no doubt that an Apple or Microsoft would easily take advantage of it and turn the UMPC into something useful and attractive.

IDF isn't over yet; there's just one more thing left. Check back later today for our final update....