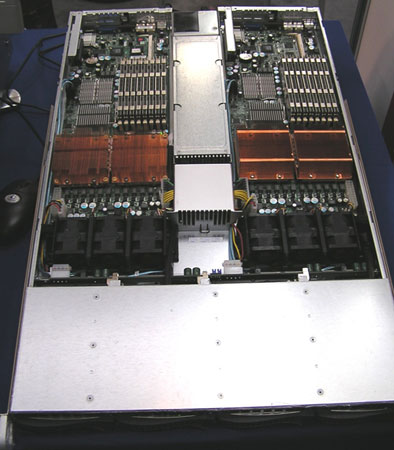 The 1U Twin offers two nodes, and up to 16 cores (2 nodes x 2 quad cores) in a 1U server, an amazing combination for the people whose prime concerns are density and HPC processing power. The 1U twin is more than just two nodes in one 1U server; this machine has been well thought out. By powering both nodes from the same 980W "up to 91% efficient" power supply, chances are good that the PSU is working at a load where it is close to its maximum efficiency. Of course, this also means that the PSU is a single point of failure, and this might lower the attractiveness as a high availability dual node server. The HPC people will probably not really care as the Supermicro PSUs are known to be very reliable, so the high processing power density and relatively low energy cost might easily offset this disadvantage.

Both nodes can also be "chained" together by the low latency, high bandwidth (20 Gbps) InfiniBand ports.

Several Supermicro Servers also now feature a new proprietary interface, based on PCIe, which Supermicro calls "Universal I/O". It looks like a rectangle part of the motherboard is missing. 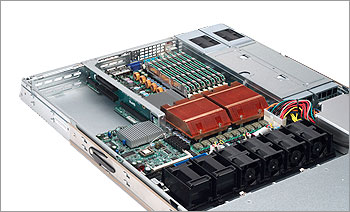 At first, another proprietary I/O interface looks like a bad idea. However, Universal I/O was made to protect the investment of the resellers. 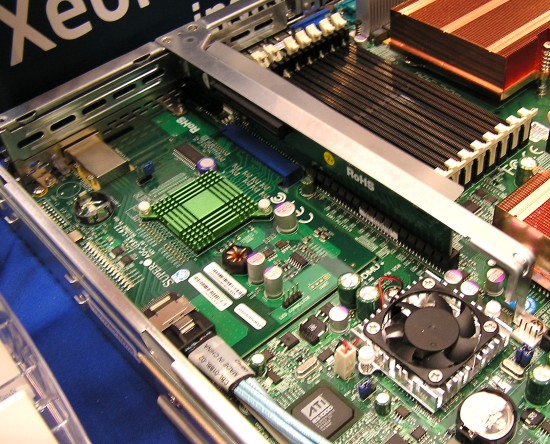 For example, consider the situation where a certain generation of SAS controllers is going to be replaced with a faster and cheaper alternative. In that case several barebones in stock might lose quite a bit of their value as customers will prefer the new barebones with the new SAS controller. It is also hard for a reseller to know whether they should stock barebones with high or low end SAS controllers, what percentage of barebones should have mostly PCIe or PCI-X slots, and so on. This is where the Universal I/O board comes in: a barebones server is not as quickly outdated if you simply add the required I/O controller when the server is sold. The Universal I/O boards are made like a part of the motherboard and as such the system does not lose the one or two PCI-E and PCI-X slots for other expansion cards.