We play back our raw files that are recorded I/O operations when running a real world benchmark - the entire Winstone 2004 suite. Intel's iPeak utility is then used to play back the trace file of all I/O operations that took place during a single run of Business Winstone 2004 and MCC Winstone 2004. The drive is formatted before each test run and a composite average of three tests on each controller interface is tabulated in order to ensure consistency in the benchmark.

iPeak gives a mean service time in milliseconds; in other words, the average time that each drive took to fulfill each I/O operation. In order to make the data more presentable, we report the scores as an average number of I/O operations per second so that higher scores translate into better performance. The resulting scores are useful for comparing "pure" performance of the storage controllers in this case. 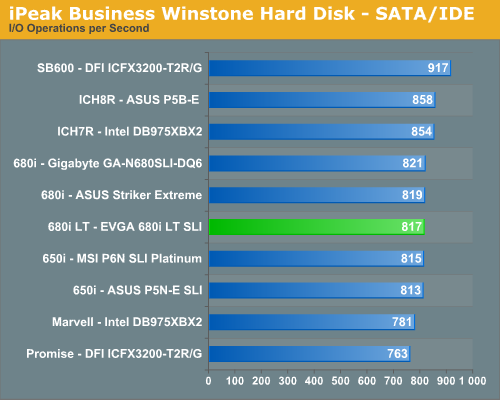 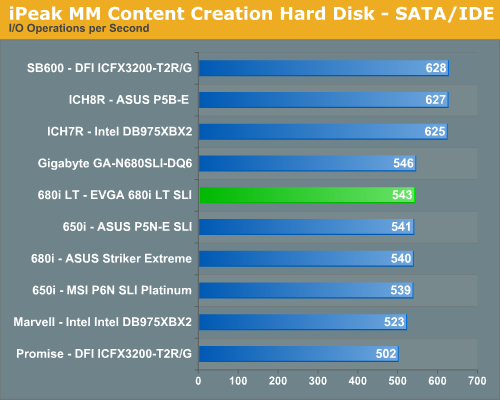 The performance patterns hold steady across both Multimedia Content I/O and Business I/O with the SB600 outperforming the Intel ICH7R, Intel ICH8R, and NVIDIA 680i/650i chipsets in our non-RAID tests. The Promise controller on the DFI board is the slowest of all solutions with the Marvell controller on the Intel 975X performing only slightly better. The 680i and 650i MCP chipsets are different but their disk performance in our tests is similar. We also ran RAID 0 and RAID 5 tests on each controller with the results being in favor of the 680i MCP by around 2% over the 680i LT MCP in these particular benchmarks. Although our NVIDIA boards generally score lower in these "pure" throughput tests, we find their actual performance in disk intensive applications are generally equal to or better than the other solutions. 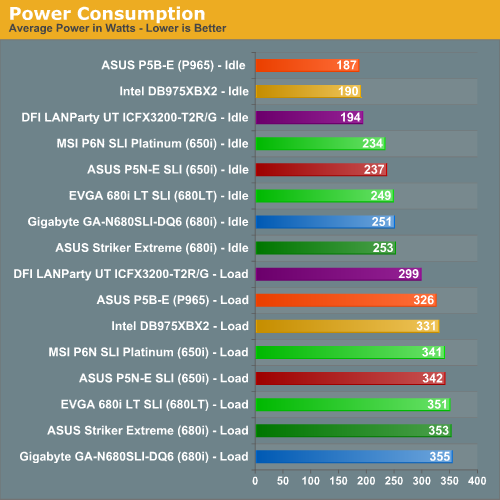 Our power consumption numbers are based on our test setup for this article that consists of an MSI 8800GTX video card and our boards have C1E/EIST turned off. The 680i boards lead all in power consumption but the 680i LT SLI is close behind with the LT certainly not meaning Lite in the way of power consumption. The P965 consumes the least amount of power at idle but around 10% more than the RD600 at load. The 975X still offers a decent level of power conservation compared to the other chipsets even though it is getting long in the tooth. 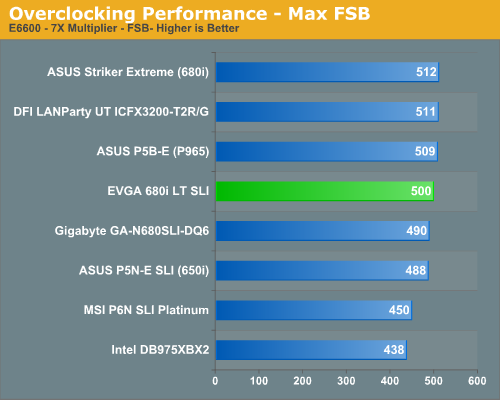 As we mentioned earlier in the article, the overclocking capability of the EVGA board has been neutered to some degree by the limited voltages and options available in the BIOS. Maybe we were just unlucky with our processor choices but this board had enough FSB holes that we thought about using it to whip up a few Swiss cheese sandwiches. After speaking with NVIDIA, we expect the overclocking capabilities of this chipset to vary based upon the luck of the draw when purchasing a board. Of course this is true of any component but it will be interesting to see the results of this latest effort by NVIDIA once the boards are in the hands of owners.

We believe their target is for consistent performance in the 450FSB to 475FSB range and anything above that will be icing on the big green cake. This will be disappointing to users who end up with a board that performs lower than our retail box sample but overclocking is never guaranteed. We will be purchasing a retail board from Newegg shortly to compare against our current board and will update our results if they are significant. Considering that there's a good chance the 680i LT boards are simply using rejected 680i chipsets - chips that couldn't run at higher FSB settings - we would advise caution for anyone looking to get an optimal overclocking platform.

We also found that during overclocking we had to set our CPU voltages a little higher than on the other boards to attain the same or better overclocks. We experienced this with the MSI 650i board and it was generally due to tighter memory/chipset timings in order to improve the performance of the board at stock speeds. Overall, our overclocking experiences were very good and the results of our tests show a board that is still very capable although certainly less than what we believe it is capable of with an enthusiast level BIOS.