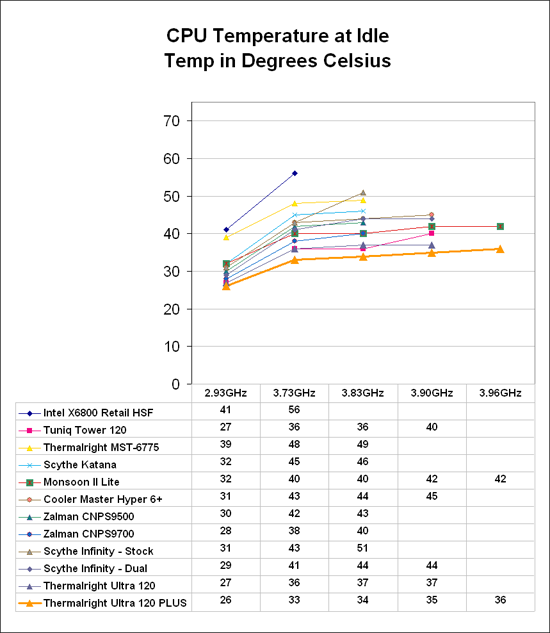 The Ultra 120 and Tuniq Tower 120 set some very high performance standards for effective cooling in overclocking. By 3.73GHz, the highest stable overclock with the Intel Retail HSF, the temperature at Idle was 56C. This compared to 36C with both the Ultra 120 and the Tuniq Tower 120. The extra heatpipes of the Ultra 120 Extreme lower this to an even better 33C. By 3.90 GHz, the previous best overclock, the Idle for the Tuniq is 40C and the Ultra 120 is 37C. The Thermalright Ultra 120 Extreme drops the idle 2C lower to 35C, and is still at 36C at the highest stable overclock of 3.94GHz. This is very close to the performance level of the Monsoon II which uses active TEC cooling and not air alone.

At overclocked speeds the temperature delta increased as the processor speed was raised, so let's see what happens under stress conditions. While looping the Far Cry River demo for 30 minutes the CPU temperature is captured at 4 second intervals with the NVIDIA monitor "logging" option. The highest temperature during the stress test is then reported. 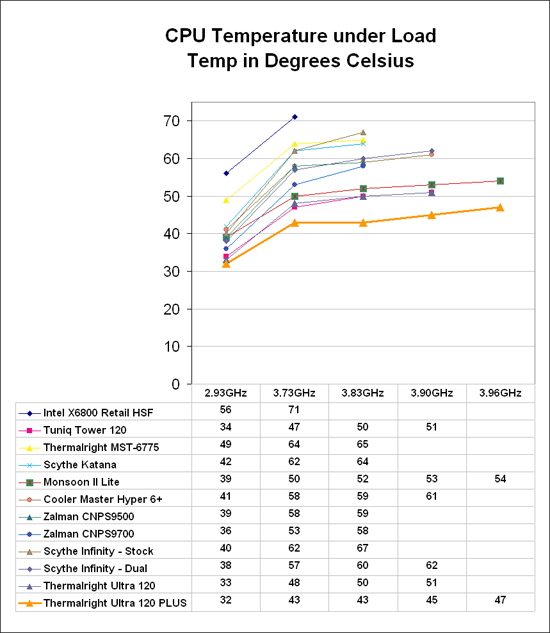 The advantage increases even more as the overclock is raised. By 3.90 GHz, which is the highest overclock the Tuniq and Thermalright Ultra 120 could reach with stability, the Tuniq and Ultra 120 are both at 51C, which was the best performance among coolers tested so far. The Ultra 120 Extreme, which is the same exact cooler as the Ultra 120 with just two additional heatpipes, bests both previous leaders by 6C, with a 3.90GHz temperature of 45C. The Thermalright Ultra 120 Extreme is still able to push the processor higher, topping out at a stable 3.94GHz. At that speed, processor temperatures under stress remained a very low 47C.

As stated many times, the overclocking abilities of the CPU will vary at the top, depending on the CPU. This particular CPU does higher FSB speeds than any X6800 we have tested, but the 3.9GHz top speed with the Tuniq and Thermalright Ultra 120 is pretty average among the X6800 processors we have tested with Tuniq cooling. Other processors tested with the best air coolers ca sometimes reach just over 4 GHz, with a range of top X6800 speeds from 3.8 to 4.0GHz. Stock cooling generally tops out 200 to 400 MHz lower, depending on the CPU, on the processors tested in our lab with the Intel Retail heatsink.