The standard test bed for cooling tests is the EVGA NVIDIA 680i SLI motherboard. This is primarily based on the consistent test results on this board and the excellent NVIDIA Monitor temperature measurement utility, which is part of the nTune program. 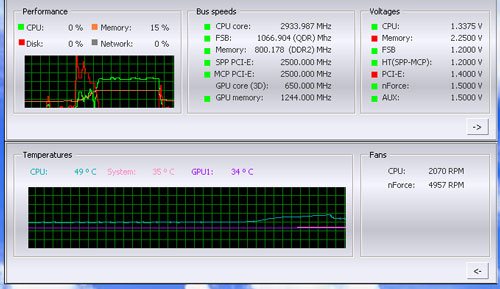 The same tests were then run on the cooler under test at stock, highest stock cooler OC speed (3.73GHz), and the highest OC that could be achieved in the same setup with the cooler being tested. This allows measurement of the cooling efficiency of the test unit compared to stock and the improvement in overclocking capabilities, if any, from using the test cooler.

The Infinity comes standard with one 120mm fan, but it can mount additional fans. We therefore ran all tests at both stock conditions (one fan) and with two fans in a push-pull configuration.

In addition to cooling efficiency and overclocking abilities, users shopping for CPU cooling solutions may also be interested in the noise levels of the cooling devices they are considering. Noise levels are measured with the case open on its side and are measured using a C.E.M. DT-8850 Sound Level meter. This meter allows accurate sound level measurements from 35bdB to 130dB with a resolution of 0.1dB and an accuracy of 1.5dB. This is sufficient for our needs in these tests, as measurement starts at the level of a relatively quiet room. Our own test room, with all computers and fans turned off, has a room noise level of 36.4dB.

Our procedures for measuring cooling system noise are described on page seven along with noise results comparing the stock Intel cooler and recently tested CPU coolers to the Scythe Infinity coolers.