AMD has been taking a beating lately; when Intel released its Core 2 microprocessor family it was priced and performed aggressively, too aggressively for AMD to adequately compete with at the time. AMD's marketing even went into remission as reviewers weren't even seeded for speed bumps to the Athlon 64 X2 line, the X2 5000+ and FX-62 were the fastest Socket-AM2 parts AMD sent out for review and they were the first ones we'd ever reviewed as well. Sometimes no PR is good PR, and an article around the launch of the Athlon 64 X2 5200+, 5400+ or 5600+ simply proclaiming that Core 2 is once again on top would only work in Intel's favor.

Quad FX came and went with limited interest from the enthusiast community, but the new platform signified a change in AMD's product lineup. Expensive FX series processors would no longer be simply speed bumps of mainstream CPUs with more cache, they would be reserved for a completely different socket as well and sold in bundles of two for Quad FX platforms. It's almost fitting that the FX line has been relegated to a platform that we didn't recommend as it makes the task of encouraging users to stay away from FX-class processors a little easier. And if having to move to a new socket wasn't reason enough to pick an AM2 processor over its FX counterpart, AMD's latest price cuts should seal the deal:

Of course a price war isn't in AMD's best interest when it comes to making money, but it's the best AMD can do until its new micro-architecture makes its debut later this year. As a reference, below is a table of Intel's Core 2 price list:

Despite AMD's recent move to 65nm, the highest clocked cores are still built on a 90nm process; this is usually the case when a new process isn't mature enough to produce adequate yields at higher clock speeds. There's also the fact that higher volume processors run at lower clock speeds so it makes sense for a capacity constrained company like AMD to move high volume parts to 65nm production before the lower demand SKUs. 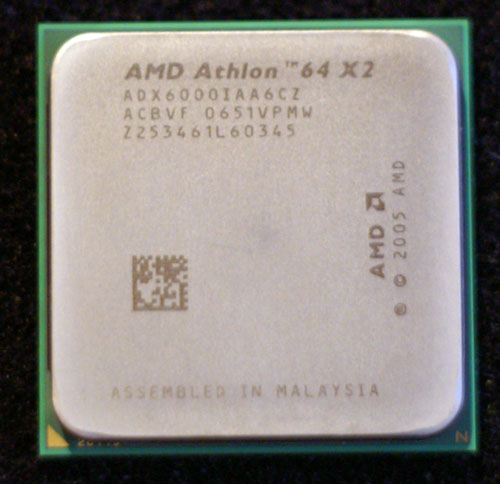