Normally, when a new part is introduced, we would spend some time talking about number of pipelines, computer power, bandwidth, and all the other juicy bits of hardware goodness. But this time around, all we need to do is point back to our original review of the G80. Absolutely the only difference between the original 8800 GTS and the new 8800 GTS 320MB is the amount of RAM on board.

The GeForce 8800 GTS 320MB uses the same number of 32-bit wide memory modules as the 640MB version (grouped in pairs to form 5 64-bit wide channels). The difference is in density: the 640MB version uses 10 64MB modules, whereas the 320MB uses 10 32MB modules. That makes it a little easier for us, as all the processing power, features, theoretical peak numbers, and the like stay the same. It also makes it very interesting, as we have a direct comparison point through which to learn just how much impact that extra 320MB of RAM has on performance.

Here's a look at the card itself. There really aren't any visible differences in the layout or design of the hardware. The only major difference is the use of the traditional green PCB rather than the black of the recent 8800 parts we've seen. 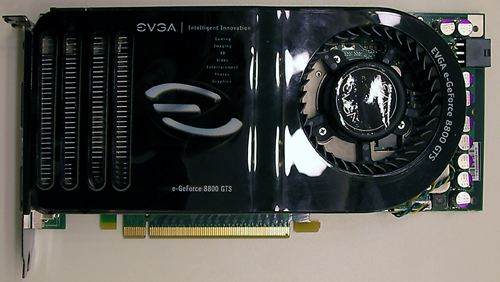 Interestingly, our EVGA sample was overclocked quite high. Core and shader speeds were at 8800 GTX levels, and memory weighed in at 850MHz. In order to test the stock speeds of the 8800 GTS 320MB, we made use of software to edit and flash the BIOS on the card. The 576MHz core and 1350MHz shader clocks were set down to 500 and 1200 respectively, and memory was adjusted down to 800MHz as well. This isn't something we recommend people run out and try, as we almost trashed our card a couple times, but it got the job done.

The test system is the same as we have used in our recent graphics hardware reviews: