As its name implied, the Teraflops Research Chip is a research vehicle and not a product. Intel has no intentions of ever selling the chip, but technology used within the CPU will definitely see the light of day in future Intel chip designs. 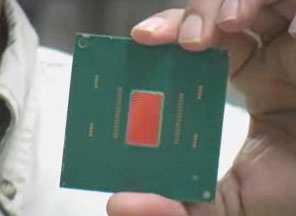 The Teraflops chip is built on Intel's 65nm process and features a modest, by today's standards, 100M transistors on a 275mm^2 die. As a reference point, Intel's Core 2 Duo, also built on a 65nm process, features 291M transistors on a 143mm^2 die. The reason the Teraflops chip is large given its relatively low transistor count is that there's very little memory on the chip itself, whereas around half of Intel's Core 2 is made up of L2 cache. Other than being predominantly logic circuits, the Teraflops chip also has a lot of I/O circuitry on it that can't be miniaturized as well as most other circuits resulting in a larger overall chip size. The chip features 8 metal layers with copper interconnects.

The Teraflops chip is built on a single die composed of 80 independent processor cores, or tiles as Intel is calling them. The tiles are arranged in a rectangle 8 tiles across and 10 tiles down; each tile has a surface area of 3mm^2.

The chip uses a LGA package like Intel's Core 2 and Pentium 4 processors, but features 1248 pins. Of the 1248 pins on the package, 343 of them are used for signaling while the rest are predominantly power and ground.

The chip can operate at a number of speeds depending on its operating voltage, but the minimum clock speed necessary to maintain its teraflop name is 3.13GHz at 1V. At that speed and voltage, the peak performance of the chip with all 80 cores active is 1 teraflop while drawing 98W of power. At 4GHz, the chip can deliver a peak performance of 1.28 TFLOP, pulling 181W at 1.2V. On the low end of the spectrum, the chip can run at 1GHz, consuming 11W and executing a maximum of 310 billion floating point operations per second.