by Wesley Fink on February 6, 2007 6:00 AM EST
19 Comments | Add A Comment
19 Comments
The heatpipe tower cooler is proving to be the most effective type of air cooler you can buy in today's market. This was clearly demonstrated in the AnandTech review of the Tuniq Tower and the recent review of two low-cost cooling towers. But like all air and water coolers, the heatpipe tower cannot cool lower than the ambient temperatures of the system. If your room is 21C, then that is the lowest possible temperature you can achieve with air or water cooling. Fortunately that is normally more than enough cooling for most overclocking, but some want to carry overclocking even further. To achieve sub-ambient temperatures, phase-change is often used, which can often cool processors to sub-zero temperatures. Phase-change is effective, but it is very expensive compared to air or water cooling and the phase-change system is extremely bulky - often much larger than the entire computer in the case.

Another sub-ambient cooling solution is TEC (Thermal Electric Cooling), which is also called Peltier cooling. For those who enjoy trivia Peltier cooling was named for the French discoverer Jean Charles Athanase Peltier. It is similar in concept to phase-change, but the TEC can in theory be much quieter and more compact, since the compressor used in phase-change cooling is not required. What is required with TEC is some means of heat dissipation. The Peltier cooler reaches sub-ambient temperatures on the cold plate, but the heat on the hot side has to be removed for the cooler to continue to work effectively. That is where efficient heat removal becomes important.

Vigor Gaming has produced cases and coolers that combine TEC and effective cooling. The Monsoon II was first introduced last year, and it represents the second generation of the Monsoon Cooler. It combines a two-phase TEC (on, half-on, off) with a fin tower and heatpipe cooler. The TEC/Cooler is controlled by a 5.25" bay mounted LCD controller that monitors and controls the processor temperature. The complete Monsoon II package has a street price of about $150. 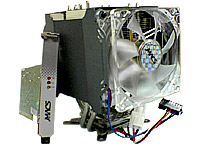 The Lite version of the Monsoon II is being introduced this week. It uses the same TEC/Cooler as the more expensive Monsoon II, but substitutes a PCI card for the LED controller. The advantage is price, as the new Lite version will list for around $100, and the street price is expected to be in the $89 range. Lite does not mean performance is compromised in any way, as the TEC cooler is exactly the same as the more expensive Monsoon II.

The idea of a combining a TEC running at low power with an effective heatsink tower cooler is intriguing, to say the least. Vigor claims that their method of running lower power to the TEC and turning the element on, on half power, and off as dictated by temperature monitoring is much more effective than the more normal method of TEC cooling, which is always on. They also claim their monitoring method and intermittent operation virtually eliminates concerns about condensation on the cold plate side of the TEC.

These are interesting claims, but they are not easily explored in a cooler review. Instead we will concentrate on the most obvious question raised by this technology, and that is does it work as claimed? Does the Monsoon II Lite cool better than the top air towers like the Tuniq Tower 120? Is noise well controlled or are there penalties in using this cooling method? That's what we aim to find out.