by Gary Key on February 5, 2007 11:00 AM EST
18 Comments | Add A Comment
18 Comments + Add A
Comment
Western Digital was founded in 1970 and began designing and manufacturing hard drives in 1988. The company is headquartered in Lake Forest, California, and employs approximately 23,000 people worldwide. Their innovative manufacturing facilities are located in Malaysia, California, and Thailand with research and design facilities in California.

The star of the show today is Western Digital's new 160GB per-platter technology currently being rolled out in their Caviar, SE, and SE16 drive families. While Western Digital announced this technology and started shipping the single platter drives back in July, multi-platter drives utilizing the new technology have just recently started shipping in volume to the retail channels. With this introduction, WD now joins Seagate, Maxtor, Samsung, and Hitachi in offering 160GB+ platter designs.

We will be reviewing additional drives from Hitachi and Samsung along with larger capacity drives from WD featuring the 160GB+ platter designs shortly, but today our focus is on the latest WD1600AAJS Caviar SE series product that features an 8MB drive buffer, native 3Gb/s SATA support, 160GB capacity, NCQ, and 7200 RPM spindle speeds. The SE series is available in capacities ranging from 40GB to 320GB and is considered to be Western Digital's mainstream desktop series with the SE16 series being slotted for the high performance desktop users with capacities up to 500GB. 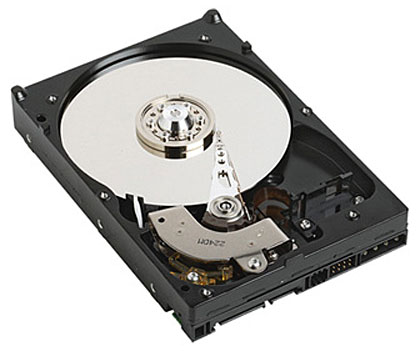 The WD drives featuring the 160GB+ (we estimate actual platter size to be 167GB) per-platter technology can be identified by the introduction of an AA sequence after the drive designation and before the internal family identification number. As an example, the previous generation SE16 500GB drive was designated as the WD5000KS with the new 160GB+ per-platter design being identified as WD5000AAKS. At this time we expect WD to launch the AA series in the SE16 family at capacity points of 250GB, 320GB, 400GB, and 500GB. The SE AA series family will eventually have the same capacity points with the addition of the 160GB model we are reviewing today. The entry level Caviar AA series is scheduled at the same capacity points but we do not have confirmation if they will be available in retail or offered as OEM only drives.

The SE and SE16 AA series feature Automatic Acoustic Management (AAM) technology . The AAM feature allows the host user to select the acoustic level of the hard drive depending upon the controller utilized. The combination of AAM and Western Digital's advanced acoustic technologies, Whisperdrive and Softseek, generated some of the best acoustic results we have seen in testing to date.

Besides the new platter density, Western Digital is also introducing ramp load technology in the new drives. Ramp Load/Unload (LUL) technology is a proven design used in mobile devices that parks the recording head when the drive is idle and on spin up, maximizing available disk space and minimizing power usage, which usually results in lower transient acoustics, lower heat, and long-term drive reliability. Another added feature is that Native Command Queuing is now standard with the AA series drives, although as in previous reviews our initial testing we did not show any real benefits for the typical desktop user with this particular drive.

Let's see how well this drive performs and if 160GB per-platter technology makes a difference in the low-end market.