Conroe has a Son: Introducing Penryn

Intel announced the first working high-k + metal gate transistors back in 2003. By 2006 it had built an SRAM test vehicle (a wafer full of nothing but cache and some control/test logic) using the new transistors to work out most of the kinks in the manufacturing process. 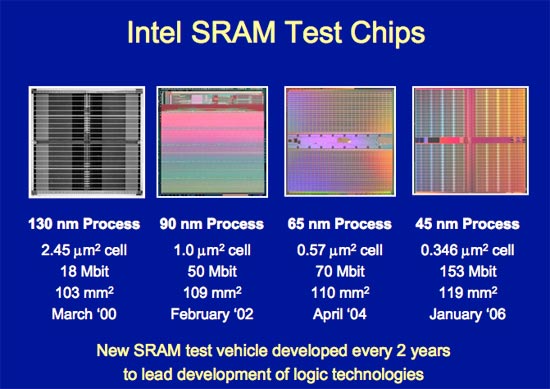 Today, Intel is announcing that its first full CPU built using the new 45nm high-k + metal gate transistors is not only up and running, but it has also booted four OSes. The very first packaged Penryn silicon from the very first wafer booted Windows Vista, Mac OS X, Windows XP and Linux on the first try.

The picture below is of Intel's validation team after they successfully booted Penryn on the above OSes. The chips arrived in the lab at around 1AM and by 3AM they were up and running. If you're concerned, that's sparkling cider in those glasses and not champagne; alcohol is not allowed on Intel's campus, as it tends not to bring out the best in CPU designs, although it does make benchmark scores look infinitely higher. 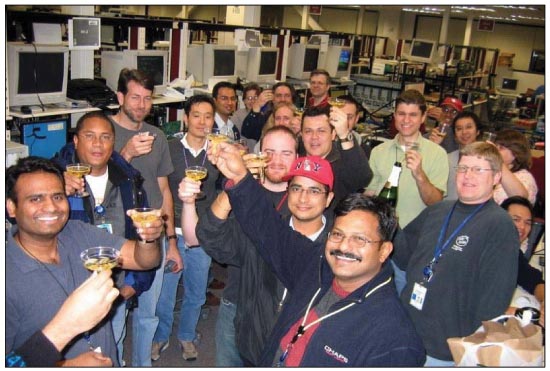 It's a fairly big accomplishment to have first silicon working this well, but Intel has had a number of successful first spins in recent history. Generally by the time you're making your first CPUs, you've got the majority of the manufacturing defects worked out thanks to your SRAM test vehicle, so any problems with the first silicon are usually due to errors in the design or in the masks.

Intel also proudly sent us a shot of the 45nm Penryn die: 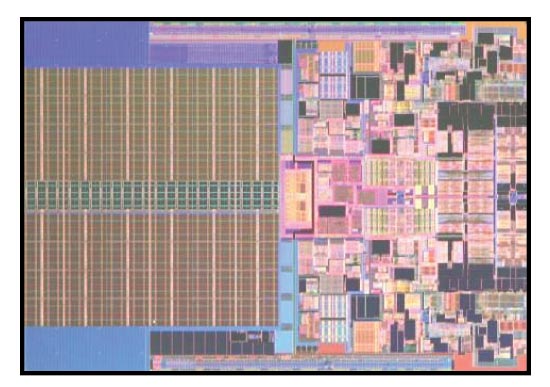 This version of Penryn is dual-core, and the first quad-core Penryn chips will simply be two of these on a single package, although later on we may see a single-die solution. At 410 million transistors, we expect a dual-core Penryn to have a 6MB shared L2 cache (up from 4MB in Conroe). The logic part of the Penryn core will be mostly evolutionary from Conroe, but do expect additional functionality and performance from more than just a larger cache.

If we assume that 288M transistors (6T SRAM) will be used by the 6MB cache, that leaves 122M transistors for L1 cache and the rest of the core. Applying the same calculation to Conroe gives us 99M transistors left over, meaning that there are roughly 23% more core-logic, control and L1 transistors being used in Penryn than in Conroe. 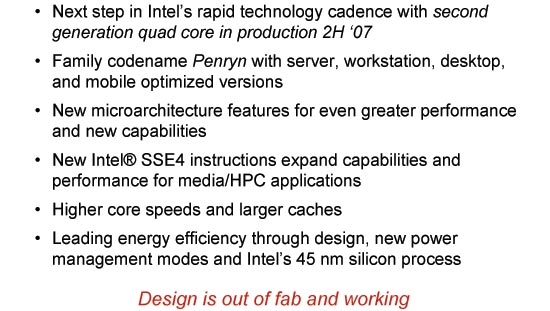 What that additional functionality will be is up in the air at this point, but you can expect SSE4 support to occupy a chunk of those transistors. At 45nm Intel should also be able to ramp up clock speed, so expect to see Penryn debut at over 3GHz easily. Given how overclockable Conroe turned out to be, we wouldn't be too surprised to see Penryn scale very well.

And the last bit of Penryn information Intel is letting out today is that it demonstrated Penryn up and running actual applications at a press briefing in Santa Clara on January 25th. There were five Penryn systems configured and clocked as follows:

All of the systems were air-cooled using normal heatsink/fan units. Unfortunately Intel wouldn't share any benchmarks or more details of the systems other than what software they were running.

At this stage in the game it's normal to see clock speeds much lower than final shipping silicon, but this is the first time that Intel has been so forthcoming with clock speed data this far before launch. What we're seeing is a far more proud and confident Intel, and honestly it has every reason to be given the recent successes of Core 2 and promise of Penryn.