by Gary Key on January 4, 2007 9:00 AM EST
14 Comments | Add A Comment
14 Comments + Add A
Comment
One of our favorite P965 boards in the labs over the past couple of months has been the Gigabyte GA-965P-DS3. Our experience with this particular motherboard has ranged from joyous moments regarding its performance and stability to downright disappointment with its quirks at launch and continuing Micron D9 memory compatibility issues. The latter has been a hindrance to extreme overclocking... until very recently. As a recap, our first experiences with the board were mainly positive but like most first release motherboards based upon new chipsets, it did have a fair share of issues that have since been solved for the most part. In early testing we encountered some memory compatibility issues, the JMicron IDE controller caused most optical drives to be stuck in PIO mode, there were sporadic overclocking issues with USB peripherals, and booting at various FSB speeds didn't always work right.

These were the most common issues with the F1 or F2 BIOS release. The memory issue was a show stopper at times due to the board not wanting to boot with memory that did not provide 1.8V compatibility. The F3 BIOS release solved the majority of these first release issues along with greatly improving memory capability. While the F3 BIOS was very stable and addressed many issues, the overclocking capability of the board was still not up to par with its technical specifications. The F4 BIOS improved overclocking for the vast majority of users, but the E6600, E6700, and X6800 CPUs were still not clocking to the same levels as on 975X motherboards. Of course, we continued to recommend the E6300 or E6400 CPUs as they are best suited for the P965 chipset. This is especially true for those who want to overclock these processors as the P965 chipset has proven itself up to the 550FSB level to date, although the memory performance penalty at these levels is horrendous at times. The F5, F6, and F7 BIOS releases resulted in additional memory compatibility, performance tweaking, improved overclocking of the 4MB equipped Core 2 Duos, and other minor fixes but the overall overclocking aspects were not really improved when compared to the F4 BIOS. Overall, we found the F5 BIOS offered the best mix of performance, compatibility, and stability of the various BIOS releases but we knew Gigabyte could do better. 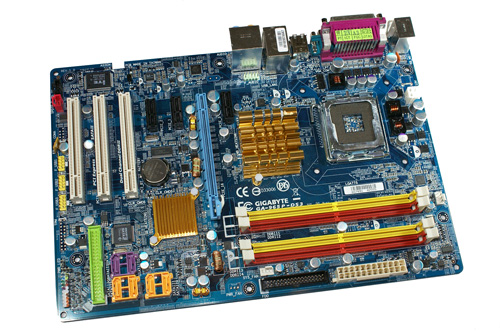 During our testing of these BIOS releases we continued to experience overclocking issues once we passed the 450FSB mark. The overclocking limit was due to issues with memory modules based on Micron D9 (G). The Micron D9 (G) IC continues to be the performance leader in the upper end memory market and is generally a requirement at this time for DDR2 modules exceeding 900MHz on a regular basis. Since the lowest memory ratio offered by the Intel P965 chipset at this time is 1:1 Micron D9 (G) based memory is a requirement for overclocking past 450FSB rates. Gigabyte continued to promise overclocking improvements when using Micron D9 based memory modules in each BIOS release but it was not until the F8I beta release that we truly noticed any improvements.

The F8I BIOS cured most of the overclocking issues along with providing some other updates, but it seemed as if the final F8 BIOS release lost some overclocking capability and introduced cold boot issues in certain systems. It did offer overclocking profiles in the BIOS along with Creative X-FI compatibility fixes, but the DS3 still wasn't as good as some alternative P965 motherboard offerings. After hearing our complaints and those of users, Gigabyte quickly followed up with the F9 BIOS release. Our testing to date reveals the F9 BIOS has once again improved the overclocking of this board at the expense of memory timings at the upper end, but performance does not suffer significantly when compared to other motherboards in the same price range. Other improvements in the F9 BIOS include further Kentsfield tweaks along with official support for the upcoming 1333FSB rated processors. We have also noted that certain cold boot issues such as overclocking settings disappearing have been solved in our test bed configuration, but we still feel like the memory timings need some fine tuning.

Let's take a quick look at the overclocking performance of the DS3 with the F9 BIOS now.