We devised a script that would compress our standard test folder consisting of 444 files, ten subfolders, and 602MB worth of data, convert a 137MB High Definition QuickTime movie clip to a 37MB MPEG-4 format, play back the first two chapters of Office Space with PowerDVD, and run our AVG anti-virus program in the background. We stop the script when the file compression and video conversion are complete. This is a very taxing script for the CPU, Memory, and Storage subsystems. We also found it to be a good indicator of system stability during our overclocking testing. 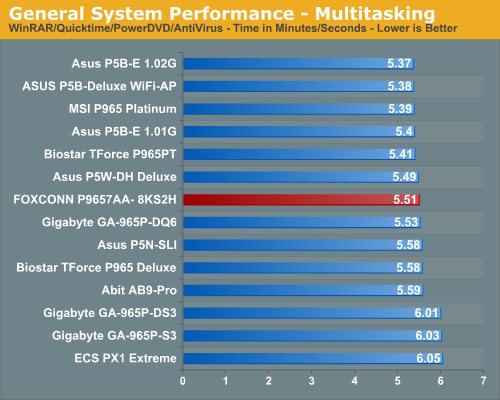 The performance difference basically mirrors our PCMark05 tests with the ASUS P965 boards scoring about 3% better overall in our multitasking test although the MSI P965 Platinum and the Biostar 965PT board are very close to the ASUS boards in this demanding multitasking test. The Foxconn board scores in the middle of the pack and continues to be competitive with the other boards despite its $100 price tag.

Our first encoding test is quite easy - we take our original Office Space DVD and use AnyDVD Ripper to copy the full DVD to the hard drive without compression, thus providing an almost exact duplicate of the DVD. We then fire up Nero Recode 2, select our Office Space copy on the hard drive, and perform a shrink operation to allow the entire movie along with extras to fit on a single 4.5GB DVD disc. We leave all options on their defaults except we check off the advanced analysis option. The scores reported include the full encoding process and are represented in minutes and seconds, with lower numbers providing better performance. 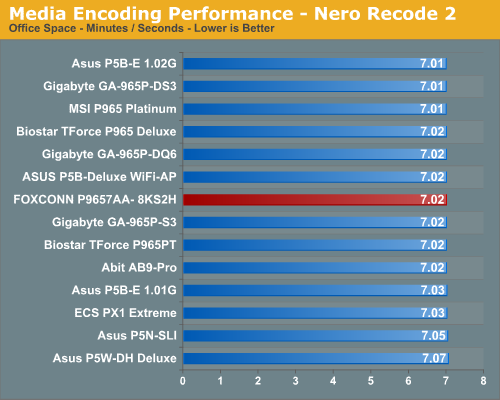 We continue to see a strong performance from the Foxconn motherboard although the differences in scores are minimal once again between the P965 boards. The 975X and NVIDIA 570SLI lag slightly behind in this test where the CPU and storage subsystems are stressed heavily.

While the media encoding prowess of the P965 boards were superb in our initial media encoding testing, we wanted to see how they faired on the audio side. Our audio test suite consists of Exact Audio Copy v095.b4 and LAME 3.98a3. We utilize the INXS Greatest Hits CD that contains 16 tracks totaling 606MB of one time '80s hits.

We set up EAC for variable bit rate encoding, burst mode for extraction, use external program for compression, and to start the external compressor upon extraction (EAC will read the next track while LAME is working on the previous track, thus removing a potential bottleneck with the optical drive). We also set the number of active threads to two to ensure both cores are active during testing. The results are presented in minutes/seconds for the encoding process, with lower numbers being better. 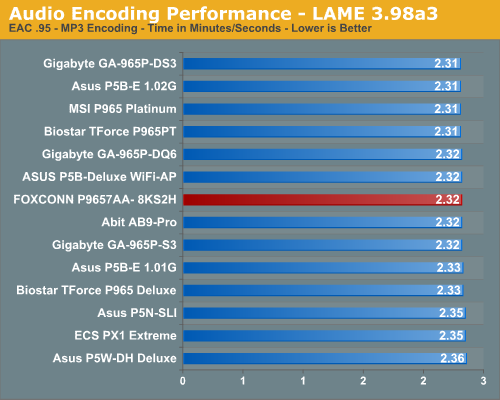 As in the media encoding section, the more intensive CPU and storage system tests seem to favor the P965 over the i975X/NV570SLI when running at the same memory timings. The Foxconn board scores near the top once again and had very consistent scores during each test run. This was surprising as the memory timings are running slower than the other boards tested except for the ECS unit.

In order to save space on our hard drives and ensure we had another CPU crunching utility, we will be reporting our file compression results with the latest version of WinRAR that fully supports multi-treaded operations and should be of particular interest for those users with dual core or multi-processor systems. Our series of file compression tests utilizes WinRAR 3.61 to compress our test folder that contains 444 files, ten subfolders, and 602MB worth of data. All default settings are utilized in WinRAR along with our hard drive being defragmented before each test. 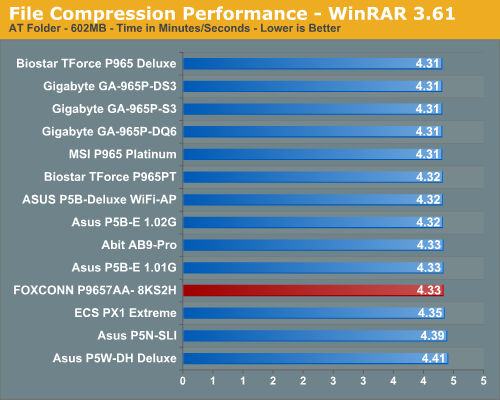 The Foxconn board scores in the bottom group of the P965 boards but the margins are extremely close between our P965 boards just reiterating the fact that boards based on the same chipset are going to offer the same performance. The 975X and 570SLI boards trail slightly but the differences are minimal.